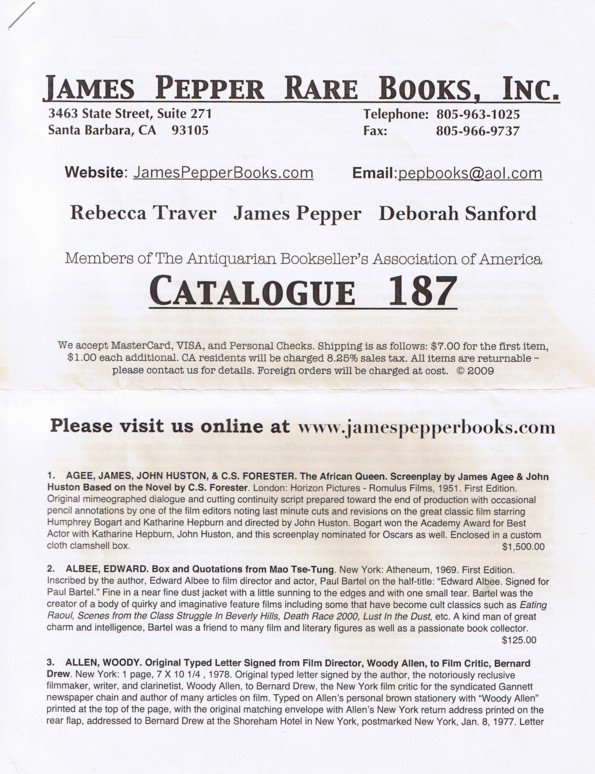 James Pepper Rare Books has issued Catalogue 187, the latest presentation from this southern California bookseller. Literature, film, art books, and detective and mystery stories can be found in this collection, many coming with autographs and inscriptions. Here is a look at some of the items being offered this time around.

Item 31 is a 1935 first edition of Salvador Dali's book, La Conquette de L'Irrationnel. This is a collection of photographs of Dali's work, with a color reproduction of the portrait of his wife, Gala, and 35 other reproductions in black and white. Among those others is his most famous work, La Persistence de la Memoirie, with the melted clocks. Dali has inscribed the book to his fellow surrealist painter Rene Magritte. This copy was sold at the auction of Magritte's widow by Sotheby's in London in 1987. Priced at $16,500.

Item 129 connects a great writer to a great actor, whose common tie was leftist politics. Author Upton Sinclair was a champion of the working class and socialist politics. He is most remembered for his expose of the meatpacking industry, The Jungle, which was intended to expose terrible working conditions, but ended up being noted for exposing unsanitary food practices. Offered is his book on the corrupting effect of money on religion, The Profits of Religion: An Essay in Economic Interpretation. This is a 1918 first edition, and it is inscribed to actor Charlie Chaplin. Chaplin shared Sinclair's left-leaning views, much of it inspired by Sinclair. $3,000.

Item 24 is an extensive biography of Edward Rice Burroughs, Irwin Porges' Edgar Rice Burroughs: The Man Who Created Tarzan. Burroughs will always be best known for his ape-man, but he wrote many other works in various fields. He was a notable writer of science fiction along with writing a few westerns. This massive 1974 biography comes with an introductory essay from another science fiction writer, Ray Bradbury. $125.

Item 50 is a rare item for Scott Fitzgerald collectors. It is a photograph from the academic year 1915-1916 at Princeton. It has captured 15 young men who were on the board of The Princeton Tiger - The College Humor Magazine. The young men are identified in manuscript on the verso, by last name only. This large image is framed and is signed by the photographer, someone with the last name "White." $12,500.

Here is another item to frame and hang on the wall - an original publisher's advertising poster for The Grapes of Wrath. It was printed for the Viking Press in 1939 for display in bookstores. It announces "John Steinbeck's New Novel," and reproduces the artwork from the book's original dust jacket, but in larger form. Item 132. $7,500.

Item 90 is a book for those looking to search for lost lands: Lost Islands. The Story of Islands That Have Vanished From Nautical Charts, by Henry Stommel, published in 1984. A few are islands that actually have risen and sunk below sea level, but most of these islands were fantasies from the get-go. They arose from optical illusions, misprints, old tales, and plain old falsification. $95.