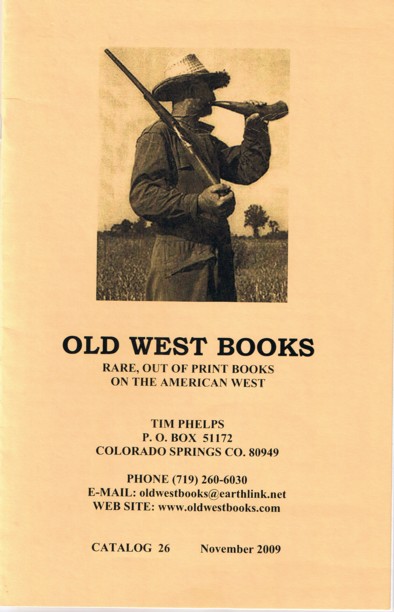 Rare books from the Old West.

Old West Books has issued Catalog 26 of Rare, Out of Print Books on the American West. Old West features materials from the aforementioned time and place, with a section on the larger-than-in-life General Custer, and one on everything else western. This is a land that has intrigued Americans and many non-Americans as well since the time it was first explored. Old West offers a catalogue full of books that will take you back to those early days when the horse was the mode of transportation, and a six-gun did your talking. Let's go back.

Item 66 is a Letter from the Secretary of War Transmitting in Response to Resolution of February 11, 1887 Correspondence with General Miles Relative to the Surrender of Geronimo. Geronimo was an Apache warrior, one of the last to hold out against the encroachments of the United States and Mexico. The Apache had held out for centuries, first against the Spanish, later the Americans. To the settlers, they were brutal killers, but they held onto their homeland longer than most Indians. Eventually, they were too far outnumbered, and Geronimo and his remaining warriors surrendered to General Miles in 1886. This item is the official report of the surrender prepared for the Senate. Priced at $625.

Item 56 is a biography of one of the "mountain men" of the 18th century: Uncle Dick Wootten. The Pioneer Frontiersman Of The Rocky Mountain Range, by Howard Conard, published in 1890 (during Wootten's lifetime). Wootten was born in Virginia, raised in Kentucky, and in his early 20s headed out west. He started as a trapper, but this was just as the interest in and value of furs was collapsing. He turned to scouting, buffalo hunting, and serving as a guide. He hauled freight for the government along the Santa Fe Trail, and then in 1866, at the age of 50, he obtained the right to build a toll road across Raton Pass in northeastern New Mexico and southeastern Colorado. In 1878, Wootten sold his road to the Atchison, Topeka and Santa Fe Railroad, which completed rail service over the old Santa Fe Trail the following year. He secured a lifetime stream of payments from the railroad that allowed him to comfortably live out his years in his home on Raton Pass. $500.

It was one of the more spectacular trials the nation had seen. It would have been even more spectacular had the defendant's younger brother been the one on trial, but since Jesse James had been convicted without trial at the barrel of a gun, Frank had to serve as a stand-in. Item 104 is The Trial of Frank James for Murder... by George Miller, Jr., published in 1898. After Jesse was shot in the back by a former comrade seeking reward money, Frank concluded his life was at great risk. He turned himself in to Missouri's Governor, who agreed not to extradite James to Minnesota where he faced murder charges. Instead, he was tried for a separate murder in Missouri, where the James brothers were still something of folk heroes. This book provides the evidence and key testimony and arguments at trial. James was acquitted, despite the evidence, and went on to live a reasonably respectable, law-abiding life for his remaining 33 years. $525.

Fifty years later another set of outlaws roamed the plains, though they rode automobiles instead of horses. Item 70 is The Story of Clyde Barrow and Bonnie Parker As Told by Bonnie's Mother Emma Parker, and Clyde's Sister, Nell Barrow Cowan. Bonnie and Clyde's family reminiscences was published in 1934. That was shortly after the untimely deaths of Ms. Parker and Mr. Barrow. This book covers the two from childhood to their time on the run to their deaths in a hail of gunfire. It is not exactly an objective look at their "careers," but does give great insight about them from the families' point of view. This copy has been signed by Fay Dunaway and Warren Beatty, who played Bonnie and Clyde in the noted movie of that name in 1967. $1,350.

Item 63 is the Life and Adventures of Billy Dixon Of Adobe Walls, Texas Panhandle... by Olive K. Dixon (his widow) published in 1914. Dixon served as an army scout, hunted buffalo for the railroads, and was involved in a couple of notable Indian fights, at Adobe Walls and Buffalo Wallow. Buffalo hunting by settlers was threatening the food supply and way of life of the Comanche and Kiowa Indians. They responded with attacks. The settlers managed to defend the Adobe Walls trading post, and the next day, with the Indians encamped on a ridge, Billy Dixon fired "the shot of the century." He picked off an Indian from almost a mile away, discouraging further attacks. However, it was later at the Battle of Buffalo Wallow, where all of the defenders were injured, that Dixon became a rare civilian winner of the Congressional Medal of Honor. $975.