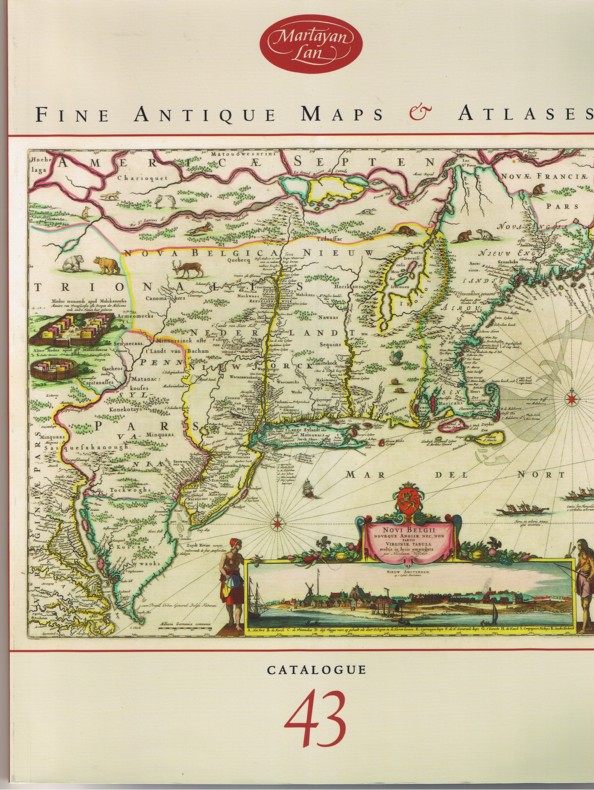 An outstanding collection of maps from Martayan Lan.

Martayan Lan has presented their Catalogue 43 of Fine Antique Maps and Atlases. This is a fabulous collection, including some of the earliest obtainable maps of the New World. Around half of the items are focused on the Americas, the remainder on other portions of the globe (or the entire globe). There are even a few extraterrestrial maps (that is, celestial maps), a few portraits of great mapmakers (Ortelius, Mercator and Hondius) as well as Indian portraits, and some atlases. We will focus on maps of America and the New World, but those who collect maps of other territories, Europe, Africa, Asia, the Arctic, will also find plenty to keep themselves occupied. Here are a few of the outstanding items Martyan Lan is serving up.

We will start with the world as it was known pre-Columbus. It had not changed much since Ptolemy's day. Item 3 is the 1493 map Secunda etas mundi, by Hartmann Schedel, taken from his Nuremberg Chronicle. This is the world Columbus would have known prior to setting sail. There is a Europe, Africa and Asia, but no America. The map contains images of various grotesque semi-human creatures, such as were imagined to exist in the far corners of the world. Martayan Lan notes that these images Europeans had of the inhabitants of far away lands led to their demonizing these people, and treating them poorly when the Europeans colonized their lands. Priced at $28,000.

There may have been no America in 1493, but by 1507, there was a large continent, at least in the southern hemisphere. Item 2 is the Johann Ruysch map of that year, Universalior Cogniti Orbis Tabula. Martayan Lan describes this map as "one of the Holy Grails of map collecting." It is the earliest acquirable map to show America. The Ruysch map shows a massive South American continent, but North America is not there, or almost not there. With the limited information available, Ruysch believed it was an extension of Asia. So, Newfoundland is the eastern most tip of Asia. Hispaniola is located approximately where it should be, but Ruysch concluded this must be Marco Polo's Japan. It is believed that Ruysch was the first cartographer of the New World to have actually been there, having traveled on some expedition at the turn of the 16th century to Newfoundland. Price on request.

Item 11 is a Blaeu world map, Nova Totius Terrarum Orbis, circa 1650. Naturally, the world was much better defined by this time, but there are two noticeably large errors. While Willem Blaeu had enough information on the east coast of North America from the English, French, and Dutch to portray it with some degree of reality, the other side of the continent, and most of its interior, were essentially unknown. The continent appears larger than Asia. Meanwhile, the great myth of the 16th through 18th centuries (pre-Cook) is displayed in all its glory - a massive southern continent larger than any other in the world. $25,000.