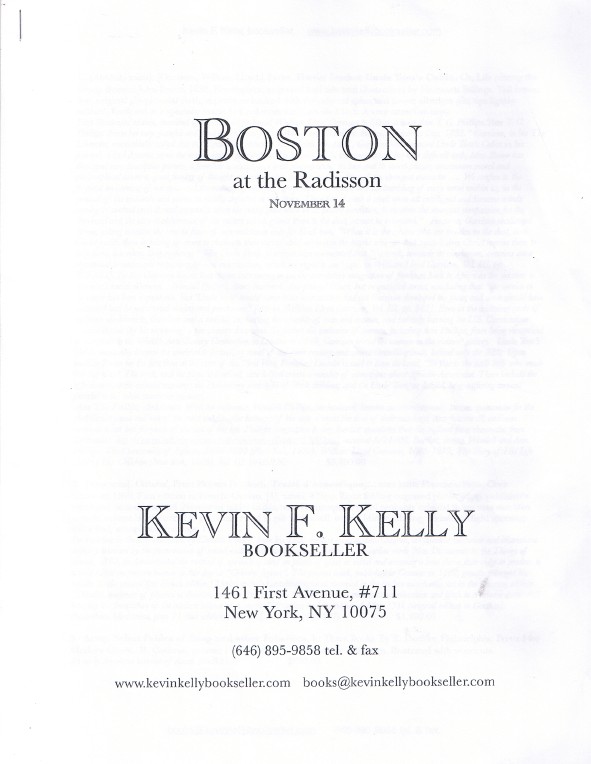 For the Boston fair from Kevin F. Kelly, Bookseller.

Kevin F. Kelly, Bookseller, printed a catalogue especially for the recent Boston Antiquarian Book Fair. This is a varied collection, impossible for this reviewer to categorize. There are a number of seafaring books, editions of Aesop's Fables, some manuscript documents concerning rations for Revolutionary War soldiers, items related to early U.S Presidents, some modern literature, a collection of Swiss watch hairsprings... See what I mean? How do you categorize this other than to say if you collect anything, you may find it among the works offered by this New York City bookseller. So, we will take a look at a few of the offerings with the understanding that it is representative only of the quality of the material available, not the subject matter.

Item 33 is the scarce, lesser-known pamphlet concerning one of the most horrendous ship disasters ever recorded. The title is An account of the loss of the Essex, from having been struck by a whale in the South Seas with some interesting particulars of the sufferings of her crew on a desert island and in the boats at sea. The Essex set sail from Nantucket in 1819, but nearly a year later, in the South Pacific whaling grounds, she was sunk by a gigantic, angry sperm whale. Chalk it up to revenge. Thousands of miles from significant civilization, the crew climbed into their three, inadequately supplied small boats. They managed to make their way to uninhabited Henderson Island, more or less in the vicinity of the Bounty mutineers' Pitcairn Island, a month later. For a week, they consumed available plants and animals and drank from a small fresh water source. However, with the island unable to sustain them much longer, 18 of the men set out to sea again, while three remained on Henderson. Their story is one of unimaginable suffering - starvation, madness, and finally, cannibalism, one group drawing lots to determine who would be food for the others. There is a more extensive, better-known account of this horror told by one of the survivors who set off from Henderson, Owen Chase. This shorter account, published in 1824, came from Thomas Chappel, one of the three who remained behind on Henderson. They, too, suffered near starvation, but were saved after the other survivors told their rescuers of their location. This incident became the inspiration for Herman Melville's Moby Dick. Priced at $1,950.

Item 21 is another book that likely inspired Melville. It is Etchings of a Whaling Cruise, with notes of a Sojourn on the island of Zanzibar, by J. Ross Browne. This is one of the best accounts of American whaling in the Pacific in the 1840s. It was reviewed in Literary World in the year following publication (1846) by Melville, whose whaling story, Moby Dick, was published in 1850. $1,250.

Item 45 pertains to a very different sort of nautical mission. It is an 1812 privateer's commission, signed by both President James Madison and the future President, Secretary of State James Monroe. The commission authorizes the armed, private schooner Rosie, operated by 35 men, "...to subdue, seize and take any armed or unarmed British vessel, public or private..." This was in effect legalized piracy, but the United States, having a weak navy to defend itself during the War of 1812, was forced to resort to this incentive-based nautical behavior to counteract superior British naval strength. $4,250.

Item 62 memorializes a very sad day in early U.S. history. The December 26, 1799, issue of Providence, Rhode Island's, United States Chronicle pronounces, "Washington is no more!" Washington had died on December 15, but in pre-electronic communications days, news traveled slowly. It includes an account of Washington's last hours from his private secretary, and tributes from President Adams and members of Congress. The paper is bordered in black. $6,000.

Item 69 is a very odd work: The Aeropleustic Art, or Navigation by the Use of Kites, or Bouyant Sails. George Pocock, the author of this 1827 treatise, believed kites could be used as auxiliary sales for ships. More interesting was his "Char-volant," a carriage powered by a kite. According to Pocock, it could run at 20 miles an hour, a speed so great it "could almost prevent breathing," except, of course, his pre-car traveled with the wind, so it felt calm. One can only guess what happened if one wanted to travel in the other direction. Perhaps this explains why it never caught on. Nevertheless, in an era of fuel shortages it sounds like a good idea, once a few adjustments are made. $7,500.