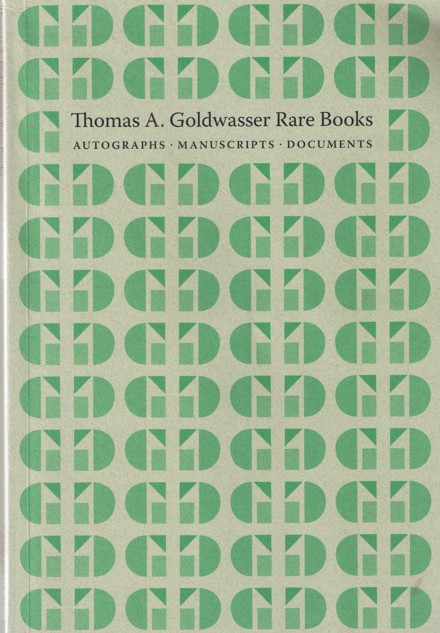 Important documents are offered by Thomas A. Goldwasser.

Thomas A. Goldwasser Rare Books has issued Catalogue 23 of autographs, manuscripts and documents. It is divided into two sections: Americana and world figures, and literature. It is filled with interesting and important letters and other documents from notable names in world events and literature. You will find documents and letters from Washington and Jefferson, Martin Luther King, Abraham Lincoln, Harry Truman, Leon Trotsky, Thomas Edison, Raoul Wallenberg and others. From literature, we find Hemingway, Twain, Carroll, Steinbeck, Kipling, Sinclair, Kerouac, Borges, Shaw, Fitzgerald, and many more. Unfortunately, we only have space for a few examples, and with a cast like this, it is hard to choose. You really need to see the entire catalogue, but here are just a few of the interesting documents you will find.

We will start with a very important letter from Thomas Jefferson to Georgia Governor George Milledge, written in 1803, shortly after the Louisiana Purchase. It reveals some of Jefferson's thinking, and the beginning of one of the most shameful events in American history, though it is unlikely Jefferson foresaw what would happen three decades later. The Louisiana Purchase had started as a purchase simply of New Orleans, as Jefferson wanted to secure open commerce from the Mississippi. However, when Napoleon offered him the entire territory, Jefferson jumped at the chance, though many argued against the purchase, saying it was unconstitutional. Jefferson writes to Milledge about plans now to build roads to New Orleans, and of difficult, but slowly progressing negotiations with the Cherokee and Creek Indians for the land necessary to complete these roads. Jefferson then mentions another use for the lands recently purchased from France - "The acquisition of Louisiana will it is hoped put in our power the means of inducing all the Indians on this side to transplant themselves to the other side of the Mississippi, before many years get about." Jefferson believed the Indians could be convinced to move voluntarily to the other side of the Mississippi, which he believed Americans would have little interest in settling. Time, of course, would prove Jefferson wrong. Many eastern Indians refused to relocate voluntarily and were eventually forced to do so, many dying on the "Trail of Tears" forced march. Similarly, Americans would in a few more decades settle the western side of the Mississippi, in time forcing the Indian tribes from most of this land too. However, all of this happened long after Jefferson was gone from the scene. Priced at $250,000.

Item 12 is a letter to, rather than from, Jefferson, and it too is very revealing. It comes from John Paul Jones, America's naval hero of the Revolution. However, the year was 1785, the Revolution now over, and Jones was living in France. The French had sent their great explorer, La Perouse, out on a mission, and Jefferson wanted to know precisely what they were up to. Jones provides Jefferson with all of the details he could find, including number of men, types of supplies, plants taken along, tools, and who paid for the mission. Jefferson's concern was that the French, America's ally in the recent revolution, might be planning on colonizing the Pacific coast of North America. The southern part of the Pacific coast was controlled by the Spanish, but the northern coast was still up for grabs. Jones' words must have been reassuring. He says of France's motives, "one of which may be to extend the commerce of his subjects by establishing factory's [fur-trading settlements] at a future day, for the Fur-Trade on the North-West Coast of America, and another to establish the Colonys in New Holland [Australia]..." This would have been reassuring. Jefferson had no problem with the French colonizing Australia or establishing fur-trading posts in North America, but he did not want to see further European colonization on either coast of North America. Not that this trip was a threat anyway, as La Perouse never returned, disappearing off the coast of Australia, no trace of his mission found for another 40 years. $37,500.