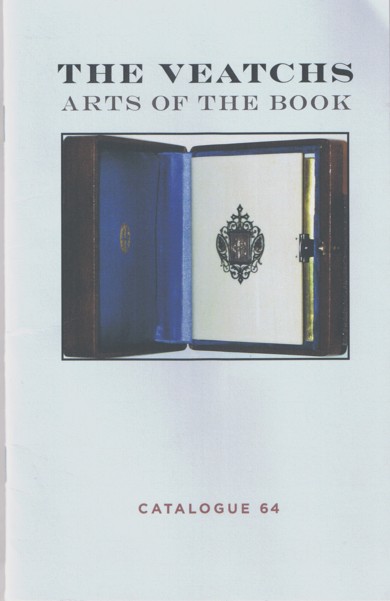 Books as art from the Veatchs.

From the Veatchs Arts of the Book comes their Catalogue 64: Recent Acquisitions. The Veatches catalogues feature examples of the book arts - fine press works, exceptional bindings, artistic typefaces, designs and illustrations, along with books about the book arts. For those who appreciate the printed word as a form of art as much communication, there are many items here you will find appealing. Here are some samples.

Item 9 is a special copy of Arthur Miller's Death of a Salesman. Published in 1984, it features five full-page etchings by Leonard Baskin, the extraordinary illustrator, artist and sculptor. Baskin operated his own private Gehenna Press, but found time complete artworks for many of the leading art museums and the FDR Memorial in Washington. This edition is signed by both Baskin and Miller. Priced at $600.

From the better-late-than-never category, here is the first printing of drawings produced by Albrecht Durer, almost 500 years behind schedule. Item 75 is the Officina Bodoni edition of Andria. A Comedy by Terence, published in 1971. It includes illustrations created by Durer for an edition planned by Johann Amerbach in 1493. However, that edition was never printed, so these illustrations remained on the shelf for almost 500 years until this limited edition was published. $1,500.

Major John Roland Abbey was one of the greatest collectors ever of artistic books. Abbey was born in 1894, the son of an English brewer. He served in both World Wars, eventually receiving the rank of major. Between the wars, Abbey began collecting books. He was attracted to their physical beauty, specializing in fine bindings, complete runs of several private presses, illuminated manuscripts, and color plate books. In 1943, he succeeded his father as chairman of the brewery, which he sold in 1954. Around the same time, he sold his spectacular collection of color plate books to another great collector of books and art, Paul Mellon. In 1965, Abbey began selling his collection at Sotheby's. He died in 1969, but the auctions continued until 1978. Item 1 is the Catalogue of the Celebrated Library of Major J.R. Abbey, ten volumes dated 1965-1978. A list of buyers and prices paid is laid in. The Veatchs note, "Abbey had everything." $200.

Would you like to buy the Brooklyn Bridge? No, this isn't a trick. Item 87 is a copy of Three Poems by Hart Crane from "The Bridge," published in 2004 by the Red Angel Press. This book features a 42-inch fold out and pop-up of the Brooklyn Bridge, which you will truly own if you purchase this copy. Item 87. $750.

Why should children have all the fun? Item 66 is what the Veatchs describe as a "flip book for adults." Miriam Macgregor's Country Chaos, published in 1980. Each leaf is cut horizontally into three parts, allowing for a mix and match of the sections. Offered is No. 15 of 30 hand-colored copies by the artist, from a run of 630. $600.

Item 106 was the first work printed by Frederic Goudy: An Essay by William Morris & Emery Walker, published in Park Ridge, Illinois, in 1903. A year later, he would move his Village Press to Boston, then New York City, and finally to Marlboro, New York. He would go on to not only print many books, but become the world's most prolific typeface designer, designing over 100 styles. $600.