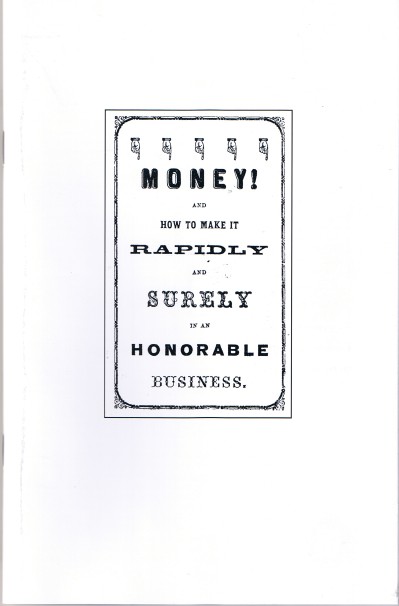 More of the odd from Garret Scott, Bookseller.

Recently arrived is Catalogue Twenty-Four from Garrett Scott, Bookseller. Scott's catalogues are always among the most unusual and entertaining you will find. They are filled with strange writings from strange people, mad scientists, medical quacks, bad poets and the like. That is not to say all of his titles are weird. There are serious and intelligent writings here as well. It's just that there is something magnetic about the works of people whose minds are a train wreck. Here are some of each from Scott's latest catalogue.

Here is a Shakespearean item most Shakespeare collectors do not own. Whether the story is true remains unknown, though I will admit to having my doubts. The item is How Shakespeare's Skull was Stolen and Found. By a Warwickshire Man, published in 1884. According to the unknown author, around 1794, Horace Walpole, over drinks one night, announced he would pay a handsome sum to anyone who would bring him Shakespeare's skull. Supposedly, a group of men took up the challenge some time later, broke into his grave, removed the skull, covered up the break-in so it would not be noticed, and brought the skull to Walpole. An evidently more sober Walpole refused to pay for it, whereupon the skull ended up being dumped in a churchyard. Some 50 years later, the anonymous "Warwickshire Man," examining Walpole's papers, deciphered the story and the skull's whereabouts, retrieved it and returned it to its grave. Then, he kept silent for another 35 years before finally revealing the story in this book. Alas poor Shakespeare, I knew him. Item 100. Priced at $50.

Item 23 is a book of poems, Songs from the St. Lawrence, by the prolific poet Marion Albina Bigelow. Scott notes she seemed to specialize in "lingering disease and childhood mortality." So we have poems such as Children Disinterred, inspired by witnessing the bodies of four dead children disinterred so they could be buried next to their mother. Then there is the e'er popular Two Smothered Children, with stanzas such as:

"Nay, their death was strangely fearful!
No fond parent closed their eyes,
And no voice of pity answer’d
To their feebly moaning cries!"

For $100, you can have a whole book full of these to recite to your dearest.

Item 112 is The Diary of a Bird Freely Translated into Human Language, by Henry Davis Minot. This is a first-person (first-bird?) account of the life of a warbler, who has a message of conservation to tell his human friends. This 1880 work may sound like another of the loony titles in Scott's catalogue, but this is a legitimate book by a serious ornithologist. Minot may be better known as co-author of the first book (pamphlet) written by his Harvard buddy, Theodore Roosevelt, The Summer Birds of the Adirondacks in Franklin County, N.Y. Minot chose to devote the rest of his life to the study of birds, while Roosevelt went on to do other things. $125.

Here is a book whose point is very different from what you would expect based on the lead in. States the writer, "...in free and enlightened Governments, where every man participates in public affairs, where the road to preferment is open to all; where merit, and not birth, confers distinction; where enterprise and industry insure a just reward; where none but salutary restraints are imposed, and consequently where the whole energies of a people are kept in constant requisition, it is not surprising that the mental faculties are often deranged." I was really expecting them to say that in an idyllic society such as this, people are happy, prosperous or something nice, not mentally deranged. Evidently we would be healthier mentally in an unfree, unenlightened society where the road to success is closed to all not born of wealth and privilege. This quote comes from the Third Annual Report of the Directors of the Ohio Lunatic Asylum, December 13, 1837, and one wonders who was running the lunatic asylum, the officers or the inmates. Item 121. $75.

Item 148 is the erudite-sounding title The Logic of History: A Study in Astral Mathematics by Jas. S. Taylor, published in 1960. Taylor had much experience from which to speak at the time, being a man 89 years of age. His thesis was historic occurrences were determined by events taking place on Neptune. He was then able to demonstrate the obvious connections. So, the 164.8 years period of Neptune's orbit coincides perfectly with the time between the American Militia Act of 1792 and the deployment of federal troops to enforce integration in Little Rock in 1957. And, the "punctum of opposition," 82 years, 4 months and 3 days, is the time that separates the Provisional Treaty of Paris in 1782 and Lee's surrender at Appomattox. Mere coincidence? I think not. If Lee had had access to this book, he would have known it was useless to resist. Defeat was in the stars, or Neptune. $75.