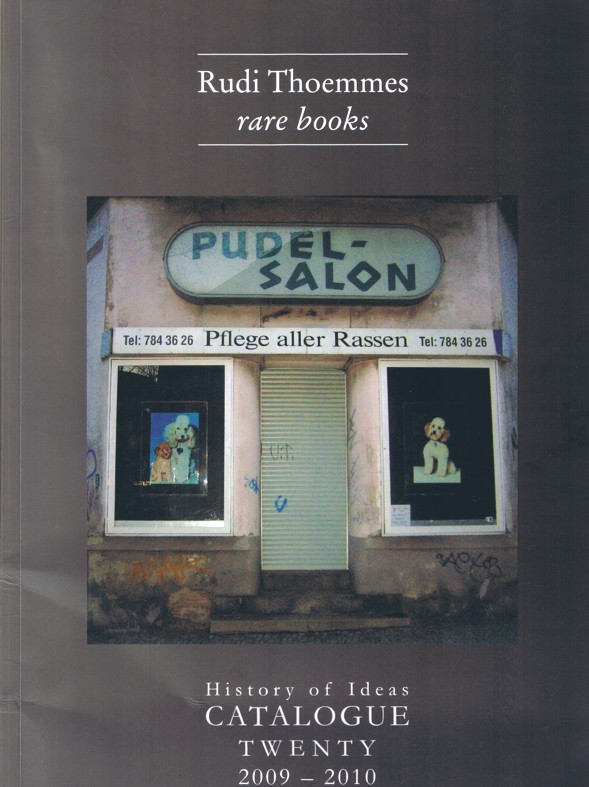 Rudi Thoemmes Rare Books has issued their Catalogue Twenty, History of Ideas. Offered are several centuries worth of thinking - philosophers, theologians, scientists and others taking on the deepest issues of the day. These are not the fleeting issues of current politics or other strictly practical matters, but the deeper questions of morality, existence, mind versus matter, and the nature of God. Many issues once considered part of philosophy and theology have now been pealed off into endeavors such as science and medicine, but the core ones remain, debated to this day, definitive answers always elusive. Here are some of the books Rudi Thoemmes has described in this latest catalogue.

Immanuel Kant was one of the foremost philosophers of all time, still read and not understood today, though he died over two centuries ago. I will not try to explain what I don't understand either, other than to say he was seeking a midpoint between two major theories of the world, rationalism, which believed everything could be determined through logical reasoning and damn what you see if it contradicts what you believe to be logical, and empiricism which claimed only what you experienced was real and therefore not even logical connections (such as cause and effect) could be established. With such extreme positions it is no wonder Kant sought a third way, as he did in this first edition of his Critik der reinen Vernunft (Critique of Pure Reason), published in 1781. Item 98. Priced at £12,500 (British pounds, or $20,810 in U.S. Dollars).

There were many new ideas being spread at this time, humanistic and Deistic philosophies that varied greatly from traditional Christian teaching. Into this void stepped Timothy Dwight. Lifted to the presidency of Yale after the death of a more liberal predecessor, Dwight attacked what he saw as the libertine, Godless views of French and similar philosophers. It was no surprise to him that the French Revolution went so bad, as it was not founded upon what he believed to be fundamental truths. Dwight explained all of this to his students in a pair of lectures given in 1797, The Nature, and Danger, of Infidel Philosophy... Item 48. £180 (US $300).

Robert Boyle was a noted 17th century chemist and general scientist, as well as being something of a theologian. As such, he felt compelled to bring the two into harmony, not always easy at a time when Biblical interpretations were more literal, and theological interpretations sometimes conflicted with scientific observation. In 1675, he anonymously published Some Considerations about the Reconcileableness of Reason and Religion. By T.E. a Lay-Man. The book also contained a discussion of the Resurrection identified as by Mr. Boyle, though it still took awhile to discover that the first part was also by him. It turns out that the "T.E." is derived from roberT boylE. Item 22. £900 (US $1,497).

Here is a treatise with a bit more practical application: Phytologia; or the Philosophy of Agriculture and Gardening, published in 1800. Author Erasmus Darwin provided an early description of photosynthesis, along with many practical suggestions for successful farming. This Darwin also believed in evolution, long before his more famous grandson released his revolutionary theory. What Erasmus missed was what motivated change, believing organisms were somehow possessed of the power to advance themselves, rather than having to rely upon natural selection. Item 38. £550 (US $915).

Catharine Macaulay Graham was a British political reformer of the late 18th century, quite influential in her time though largely forgotten today. She befriended many of America's revolutionaries, including a lasting friendship with George Washington. In 1790, she took on women's issues in her book Letters on Education. She believed women were held back from competing in a man's world because of a lack of education. Her views would be expressed a few years later by the better-known Mary Wollstonecraft, although the latter saw education more as an entrée to more effective motherhood and traditional roles. Item 70. £2,200 (US $3,665).