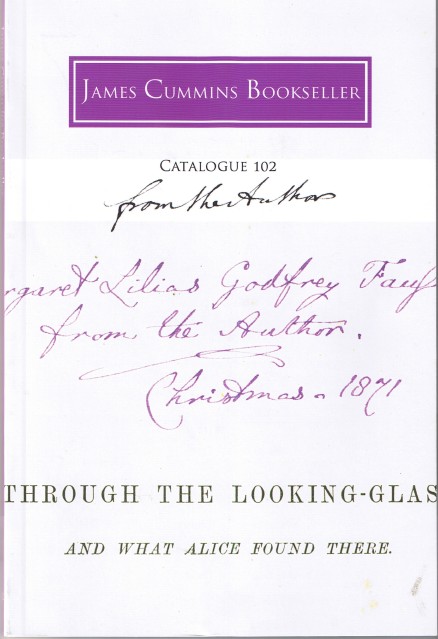 James Cummins, Bookseller has issued a catalogue entitled From the Author. At first glance, that might seem obvious. All books come from an author. However, what we have here are books that have been inscribed. Perhaps the title isn't precisely correct, as while all are inscribed, they aren't necessarily inscribed by the book's author. That became obvious very quickly when in the letter "A" we found a book by Aristotle. Good luck finding a book inscribed by Aristotle, especially a printed one. Nevertheless, while they aren't necessarily inscribed by the author, they are inscribed by some interesting person or other, frequently adding a significant connection to the underlying text. Here are a few of these inscribed works.

Item 108 is generally regarded as W. Somerset Maugham's greatest novel, an opinion to which he acquiesced. It is Of Human Bondage, generally considered to be largely autobiographical. To this Maugham also acquiesced, but perhaps only to a more limited degree. In his inscription to James Spencer, Maugham writes, "This by way of being an autobiographical novel, but it IS a novel & fiction has as great a place in it as fact." This is a first English edition, published in 1915. Priced at $3,500.

Item 48 is an inscribed copy of Through the Looking Glass by Charles Lutwidge Dodgson, better known by his penname Lewis Carroll. It is inscribed to Margaret Lilias Godfrey Faussett for Christmas of 1871. Faussett could be described as one of Dodgson's numerous "child friends," though she was also the daughter of a close friend and associate from his role as a mathematics professor, Robert Godfrey Faussett. Ms. Faussett would later write that she met Dodgson prior to the book being published, but that he had promised to send her a copy once it was printed. This is proof he kept his word. This letter is displayed on the catalogue's cover (click the thumbnail image above to view). $15,000.

Item 141 is a Shakespearean play, not inscribed by Shakespeare, but by the greatest Shakespearean actor of his day: The Merchant of Venice, as Performed at the Winter Garden Theater of New York, January 1867, by Edwin Booth. Booth was a great actor with a magnificent career, but his accomplishments have been sadly overshadowed by the destructive behavior of his actor brother John Wilkes, who assassinated President Lincoln. Edwin had to leave the stage for several months after his brother's misdeed, so badly was the "Booth" name tarnished. Booth inscribed this book on July 2, 1867, to Charles Tuckerman, a writer, poet and diplomat who served as U.S. minister to Greece during the Johnson and Grant administrations and later wrote about that country. $750.

Item 3 is The Life and Work of Susan B. Anthony including Public Addresses, Her Own Letters and many from her contemporaries during Fifty Years, by Ida Harper. Rather than being signed by the author, it is inscribed by the subject herself, Susan B. Anthony. This is a two-volume authorized biography, and Ms. Anthony has inscribed both books to Charlotte A. Thomas, a suffragette from Maine. $6,500.