The Unusual, Odd and Inexpensive from Peter L. Masi Books 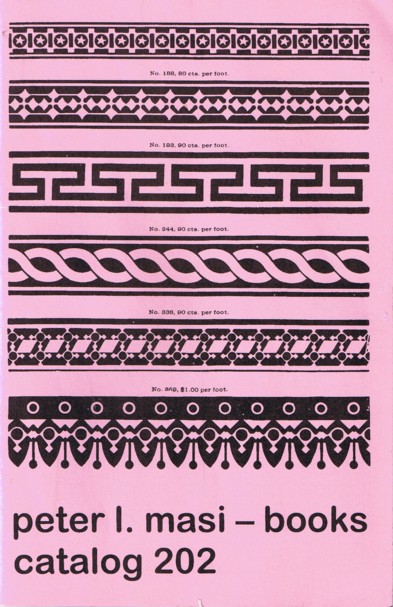 There are all sorts of unusual publications in Peter L. Masi's latest catalogue.

Peter L. Masi Books has published Catalog 202, a collection of odd and obscure publications priced for any budget. What we have here are publications by various organizations, institutions, schools, religious groups, corporations, medical societies, advertisers, agricultural associations, and the like. You will get a good look at American culture from the early 19th through the mid-20th century through these obscure publications. And, while most of these items are undoubtedly rare, they are not priced like rare books. The great majority of the 500-plus publications are priced $10-$20. It's like eBay, only cheaper. Here are a few of the unusual items Masi is offering this month.

We've heard of the businessman and businesswoman, but how about The Business Hen? This 1904 work edited by Herbert W. Collingwood is more about various breeds and operating a poultry business than about putting chickens in charge of the henhouse. Item 8. $10.

If you prefer a more exotic animal farm, there's Practical Muskrat Raising. Apparently, muskrat was more popular in 1927 when E.J. Dailey wrote this piece than it is today, both for its fur and as food. According to Wikipedia, muskrat is a popular dish in Michigan. I don't necessarily believe everything I read in Wikipedia. Item 11. $15. For those whose tastes are vegetarian, item 31 is T.B. Terry and A.I. Root's The ABC of Potato Culture, printed in 1911. This is not about the customs and ethnicity of Mr. Potato Head, but contains the latest techniques on growing the tubers. $15.

Item 219 is a most ironic title, American Prosperity: Its Causes and Consequences, by Paul M. Mazur. It was published in that most prosperous of years - 1928. American prosperity was soon to end. To complete the irony, the book was published by Lehman Brothers. It was their collapse that triggered last year's stock market fall and the greatest recession since the one that followed the publication of this book. $10.

Speaking of irony, how about this one - Johns-Manville Asbestos Flexboard for the Farm. You don't want this stuff on your farm or anywhere else. This brochure displays asbestos being used in barns, portable buildings, tourist cabins, cottages, bunkhouses for seasonal workers, and anyplace else you want people or animals to become very sick. Of course, in 1947, no one knew how dangerous this was, least of all the Johns-Manville Company. In 1982, it became the largest bankruptcy in American history as a result of claims for asbestos poisoning. Item 119. $10.

What are appropriate careers for women? The Vocation Office for Girls had answers in 1911, and they published them in a group of bulletins called Vocations for Boston Girls. At the top of the list is telephone operator, followed by other choices such as stenography, nursery maid, dressmaking, straw hat making, hairdressing, and - here's a bit of a surprise - bookbinding. Item 558. $50.

Here is an intriguing title - What Mrs. Dewey Did with the New Jell-O. Do you really want to know what Mrs. Dewey does with Jell-O? Okay, I'll tell you. She makes lots of tasty dishes and desserts. You can read her recipes in this brochure, published by the Jell-O Company in 1933. Item 294. $8.

Here's a catalogue for the child in you: Illustrated Catalogue of Iron Toys Manufactured by the Dent Hardware Co. This circa 1910 catalogue has chariots and automobiles, ox carts, ice wagons, sleighs, steamboats, trains, fire engines, horses, lions, elephants, and much more. Item 328. $25.

Item 163 will interest all serious book collectors. It's American Book Collectors and Collecting from Colonial Times to the Present, the "present" in this case being 1941. You will read about all the great American names up to that time, Jefferson, Isaiah Thomas, John Carter Brown, Brinley, Morgan, Ticknor, Huntington, Folger, and many more. $10.