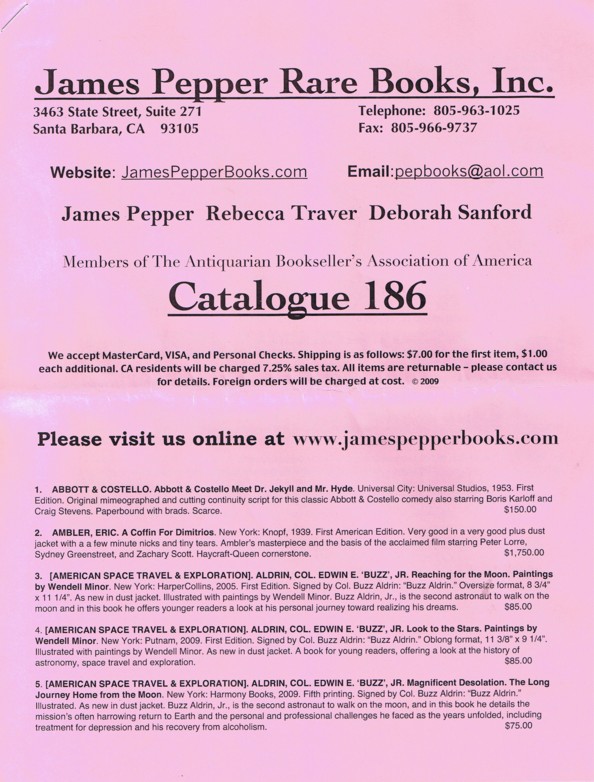 James Pepper Rare Books has issued Catalogue 186 in a familiar series. The Santa Barbara bookseller generally features literature, science and detective fiction, and items related to film and the theater. While there will always be an exception or two from these parameters, what we have this time is what we expect to see in a Pepper catalogue. So, we will take a look at some of this month's specific offerings.

Item 114 is a rare and remarkable Eugene O'Neill piece. In the early 1940s, O'Neill contracted a neurological disorder which caused his hands to shake uncontrollably. Though he tried dictating, O'Neill was unable to write unless he put pen to paper, thus his writing came to an end. Fortunately, he had written drafts of what would become his four most notable plays, including Long Day's Journey Into Night and The Iceman Cometh. By this time, O'Neill was estranged from his three children, had divorced two wives and had a rocky relationship with his third. Fortunately, he seems to have had a good relationship with his step-daughter, who typed and probably helped correct his manuscripts, perhaps saving some of his greatest works. When A Moon for the Misbegotten, the last play he wrote, and the last one published during his lifetime, was released, O'Neill inscribed this copy to his daughter-in-law, Cynthia Chapman Stram, as follows: "For Cyn, whom I regard as a collaborator in this opus - which I wish were better! - (think of those days of typing!) - with as always, love and understanding: Your admiring Step-Pop, Gene, August 1952." Though Cynthia lost her job as O'Neill's typist, that was at the behest of her mother, a troubled woman, not her troubled stepfather, who obviously maintained good feelings toward her. While O'Neill tried his best to sign and inscribe copies of his books, this became increasingly difficult as the years went on. By the time Moon was published, such inscriptions, even to family members, became rare, making this inscribed copy exceptional. He died the following year. Priced at $15,000.

Withdrawal from writing was forced upon O'Neill by illness, but here is a writer who withdrew voluntarily. J.D. Salinger was a critically acclaimed, but not very well-known author when he published The Catcher in the Rye in 1951. It was an enormous success, its off-color language making it controversial for its day, only further enhancing its popularity. Schools ever since have never known whether to include the book in their curriculum or ban it. However, fame did not suit Salinger well. He began to withdraw from society, writing less and eventually refusing all interviews. Therefore, item 127 is unusual. It is a broadside published in advance of his Nine Stories in 1953. It's headed, J.D. Salinger's Own Words, where he discusses things about his personal life and writing, things you would not expect to hear him discuss. Item 127. $4,500.

If you believe what you see on the silver screen, then this archive of material is related to Jimmy Stewart's mother. Beulah Bondi was never a siren of the screen. She did not begin getting roles until she was in her 40s, and then regularly played the role of the star's mother. That would most often be the case with Stewart. She played his mother in four films, including Mr. Smith Goes to Washington, and It's a Wonderful Life. Item 15 is an archive of letters, clippings, photographs (including a large still from Mr. Smith), and other ephemeral items related to the talented character actress. Ms. Bondi received two Oscar nominations for best supporting actress, and an Emmy for her last role, as a guest in television's The Waltons in 1976. She died in 1981 at the age of 92. Item 15. $450.

Speaking of Oscars, here is a notable film contract from 1946. The film named in this 20-page contract is Katie For Congress, and the actress who was hired and signed this document was Loretta Young. The film would be renamed The Farmer's Daughter, and it won the Oscar for Best Actress of 1947 for Miss Young. Item 47. $950.

Here is the unexpected item for a Pepper catalogue. It is a Statistical View of the United States, Embracing its Territory, Population - White, Free Colored, and Slave - Moral and Social Condition, Industry, Property, and Revenue... This 1854 government publication based on census data is inscribed "With Respects of W.M. Tweed." Tweed was a one-term congressman from New York, serving from 1853-55, but this is not what he is remembered for. He would go on to be the most famous of political bosses ever, the infamous "Boss Tweed" of Tammany Hall. He would control New York City's government by 1870. The corruption was stunning. Along with ballot box stuffing the "Tweed Ring" skimmed off enormous amounts of money, possibly $1 billion or more in today's dollars. However, Tweed was also a very personable man and knew how to ingratiate people with kind words and favors. Unfortunately for him, the corruption was just too great. He was arrested in 1871, convicted in 1873, sent to prison, from which he escaped to Spain, was caught ten months later and died in prison in 1878. Item 138. $950.