New and On Sale Americana from Clark Rare Books 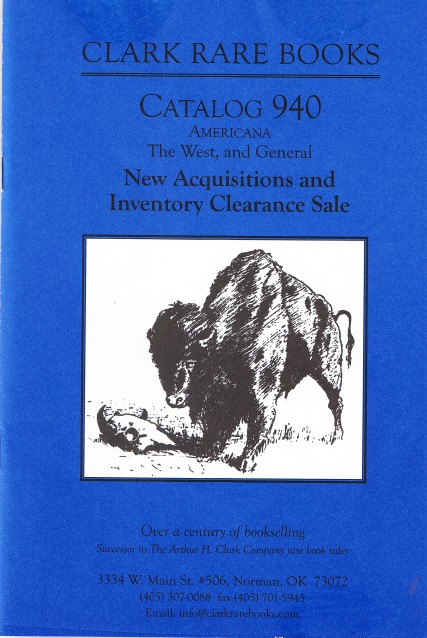 Clark Rare Books has issued its 940th catalogue, New Acquisitions and Inventory Clearance Sale. As the title suggests, this is a two-part catalogue. The first 80 items are all new to Clark's inventory, and there are some very special works in the field of rare Americana in this section. The remaining 200-plus items are ones Clark has catalogued before, but as they try to free up a bit more shelf space for incoming books, they have reduced the price on these by 30%. There are items here priced as low as $5, so take 30% off of that and you will find books that are not going to break your bank. However, for this review, we will focus on the new material, including some very important books.

Item 39 is the first insider's look at the most famous of all American expeditions, that of Lewis and Clark to the new lands obtained through the Louisiana Purchase. Though the journey ran from 1804-1806, the captains did not publish their official account until 1814. Several others jumped the gun and published earlier, but the first book published by a participant in the journey came out in 1807. The author was Patrick Gass, an enlisted man who was promoted to an officer during the journey. Though not as thorough a report as the official version years later, it was the first account of Lewis and Clark's visit to this new territory by an eyewitness. The book is titled A Journal of the Voyages and Travels of a Corps of Discovery, under the Command of Capt. Lewis and Capt. Clark...During the Years 1804, 1805 & 1806. Priced at $15,400.

Item 1 is the first American edition of a major American work, Thomas Jefferson's Notes on the State of Virginia. Jefferson originally wrote the book to provide an account of the colony-now-state to a foreigner and published it in Paris in 1782. After a second edition in London, the first American was published in Philadelphia in 1788. It was the only book-length publication by Jefferson during his lifetime. $7,695.

Item 19 is an account of the deepest inland exploration of the American continent by an Englishman prior to the Revolution. Jonathan Carver set out to find a water passage across the continent in 1766. It brought him up through the Great Lakes to the head of the Mississippi, the old Northwest. That was as far as he got, though he speculated, correctly, on a great range of mountains from which rivers flowed to both seas. His book tells much about forts and Indian tribes he encountered along the way. The book is Travels Through the Interior Parts of North America in the years 1766, 1767, and 1768, and this is a 1779 second edition, published a year after the first. $2,850.

Item 3 is a look at Picturesque Canada, the country as it was and is, edited by George Munro Grant. Actually, you can leave off the "as it is" part now since this book was published in 1882. It contains over 500 wood engravings of scenes, activities, and places in 19th century Canada. $275.

Item 15 is George Armstrong Custer's My Life on the Plains. Of course, Custer is better known for his death on the plains, but before he made his unsuccessful last stand, he participated in various military campaigns in the West. This is an 1874 first edition that contains the 1874 signature of Joseph Warren Keifer, who served with Custer in the Civil War and went on to be a congressman from Ohio. $1,475.

Captains George Dixon and Nathaniel Portlock both served on Cook's last voyage, which took them to America's Northwest coast. A few years later, they commanded their own expedition, and while also unsuccessful in finding a Northwest Passage, they did participate in opening the fur trade and expanded the mapping and knowledge of the coast. They each wrote accounts of their voyage on returning. Item 20 is Dixon's account, A Voyage Round the World; But More Particularly to the North-West Coast of America: Performed in 1785...1788... published in 1789. $5,200.