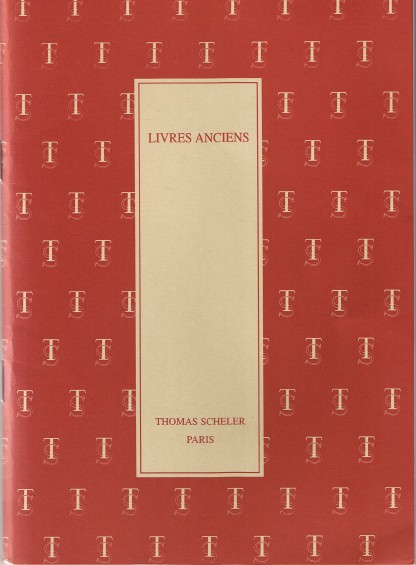 Librairie Thomas-Scheler has issued their 38th catalogue of Livres Anciens, or "antiquarian books" to those who speak English. This catalogue will require some familiarity with the French language to be fully appreciated, appropriate enough as most (but not all) works are in that language. The Clavreuils have put together another fine catalogue of antiquarian works from the Continent, covering numerous topics such as science, exploration, religion, literature, medicine, even dentistry. So, we will open wide the pages of this catalogue to examine a few of the works within.

Item 7 is a look at China in the 18th century from the perspective of five Jesuit missionaries to Peking. The title is Mémoires concernant l’histoire, les sciences, les arts, les moeurs, les usages, etc. des Chinois, par les Missionaires de Pékin, written by the missionaries Amiot, Bourgeois, Cibot, Ko and Poirot, published in 15 volumes from 1776-1791. This massive set includes information about Chinese law, customs, current affairs, science, and military strategy. One volume is devoted to the life of Confucius. Amiot, the main writer, went to China in 1740, and became sufficiently popular with the government that he was able to stay for the remainder of his life (he died in 1793), even after the suppression of the Jesuits. Priced at €15,000 (euros, or approximately $22,206 in U.S. dollars).

Louis Duperrey may not be the most famous of explorers. He had already sailed around the world with Freycinet when he convinced the French King to put him in charge of his own expedition. By this point (the 1820's) most of the sizable parts of the world had been discovered, so after a few stops in South America, Duperrey spent most of his time exploring numerous Pacific Islands, some unknown or barely known. It was a long trip, lasting from 1822 to 1825, and what Duperrey did bring back was an enormous volume of information relating to the natural history of these obscure places. He brought back a collection of over 5,000 species of plants and animals by the time he circled the globe to return to France. Item 74 is the rare atlas volumes of his Voyage autour du monde exécuté par ordre du roi, sur la corvette de Sa Majesté, La Coquille, pendant les années 1822, 1823, 1824 et 1825, published 1826-1830. €85,000 (US $125,608).

George Vancouver was another great explorer, who also visited many of the Pacific Islands and Australia, but he is most noted for his visit to America's Pacific coast. He had visited the area as part of Cook's third expedition, but undertook his own exploration during the years 1791-1795, and completed a circumnavigation of the world as well. His name graces cities on both sides of the northwestern U.S.-Canadian border and a major island off the coast. Vancouver was English, not French, but item 190 is the first French edition of his account of the voyage, Voyage de Decouvertes, a l'ocean Pacifique du nord, et autour du monde, execute pendant les annees 1790...1795. €15,000 (US $22,206).

Maria Agnesi was a brilliant scholar in a time when women were rarely appreciated for their intelligence. Born in 1718, she was fluent in many languages by the time she was ten, and was giving lectures in Latin at her father's home on philosophy and similarly complicated subjects in her teens. However, it was as a mathematician that she developed her greatest reputation. She understood and wrote about subjects you and I will never understand. On the death of her father, she was appointed chairman of the mathematics department at the University of Bologna, virtually unheard for a woman in her time. In 1748, she published Instituzioni analitiche, two volumes and over 1,000 pages of higher mathematics. Surprisingly, Ms. Agnesi was more interested in a religious and charitable career, and after the death of her father, who pushed her intellectual pursuits, she built a home for the poor, ran a home for the elderly, and died in poverty, having given away all of her earlier wealth. Item 2. €4,000 (US $5,912).

Item 46 is a copy of Francois-Rene de Chateaubriand's Memoires d'Outre-Tombe (memories from beyond the grave). It was published, fittingly, shortly after his death in 1848. Chateaubriand doubled as various officials in numerous French governments and a romantic novelist. It gave him lots to write about. In 1809, he determined to write these memoirs, a project that would take 40 years to complete. It is his most notable work. €8,500 (US $12,561).