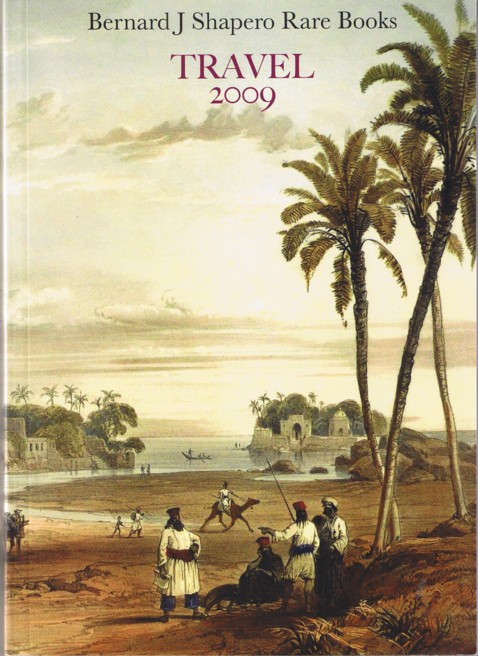 Bernard J. Shapero Rare Books has issued their annual exploration catalogue: Travel 2009. The common point is that most of these travels began in Europe, principally England, but from there proceeded to the four corners of the round globe. Every continent, Antarctica included, gets its due. You won't find any air travel here, and very little via internal combustion engine. These explorations are overwhelmingly by boat, horse, and foot. What we find here are discoveries of new worlds as seen through the eyes of Europeans, who were fascinated by the customs, dress, and behavior of different people and the natural history of their far-off lands. Along with the books, the concluding section of the catalogue contains vintage photographs taken of these far off places over a century ago. Here are a few of these travels from another time.

Item 7 is an account of a brave but doomed British exploration in the late 16th century: The Observations of Sir Richard Havvkins Knight, in His Voiage to the South Sea Anno Domini 1593. Hawkins, the son of an admiral, was at home at sea. As a young man, he traveled with noted privateer Francis Drake, including a visit to Sir Walter Raleigh's colony in America in 1586. He was given command of a ship during his country's defeat of the Spanish Armada in 1588. He next petitioned to sail to the Americas, most likely to harass and confiscate goods from the Spanish, though he remembered the voyage in his book as one of exploration. He made it to the west side of South America, but was cornered by a couple of Spanish ships, and after bravely resisting and being seriously wounded, he was forced to surrender. He remained a prisoner of the Spanish for eight years until he was ransomed in 1602. His account was finally published in 1622, the year Hawkins died. Priced at £17,500 (British pounds or approximately $28,608 in U.S. dollars).

Hawkins' journey was pleasant compared to the second expedition of Mungo Park. Park was an African explorer, the first European to visit the Niger River during his first exploration in 1795. It was a difficult trip, Park being imprisoned for several months, and laid low by illness for many more. He was presumed lost back home, his return to Britain being a notable triumph. In 1806, he returned to Africa in hopes of riding down the Niger to find its termination (at the time, the complete course of the river was still unknown). This time, his journey overland to the river proved to be a disaster. They traveled during the hottest time of year, with the rainy season approaching. Fever spread through the camp, and by the time they reached the river, only 12 of the 45 Europeans still survived. Park persevered. Finally, down to three Europeans, a few slaves and guides, Park sent some letters back home with a guide and set off down the Niger. He was never heard from again. A later return by one of his guides determined that he had apparently succumbed to unfriendly natives along the way. Item 31 is The Journal of a Mission to the Interior of Africa in the Year 1805, which includes some of his earlier reports, private letters, a biography, and information from the search to find him. It was published (first edition) in 1815. £2,000 (US $3,270).