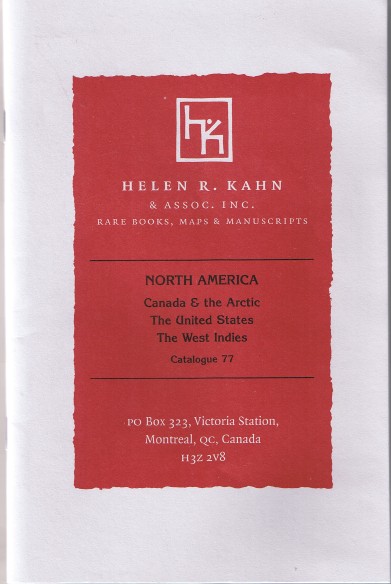 Helen R. Kahn and Associates has issued their 77th catalogue: North America. Canada & the Arctic, the United States, the West Indies. Offered are primarily early works - 17th to 19th century. Many books cover explorations of a then wilderness-filled continent, others involve the political issues and rivalries of the powers that battled for this land in the days before the American Revolution. Then there are the books that pertain to that revolt, and the new nation that arose on the continent, along with others that pertain to the country to its north - Canada - where Kahn's library is located. Canada remained a British colony almost a century longer, so we continue to find books relating to British governance in North America long into the 19th century. Here are a few of the books we found in Kahn's latest catalogue.

Item 126 is an ironic item that shows that perpetual can be a much shorter time than you think. It is Four Dissertations, on the Reciprocal Advantages of a Perpetual Union between Great-Britain and her American Colonies. Written for Mr. Sargent's Prize-Medal. The year was 1766 and though differences were starting to arise between the King and his colonies, these were still considered internal family squabbles. Most people still saw the union as perpetual at the time, though it would be just a decade later that the colonists would declare their split. Among the four individuals who presented dissertations on the benefits of perpetual union were Francis Hopkinson, who would become a signer of the Declaration of Independence, John Morgan, the Chief Physician for the Continental Army at the outbreak of the revolution, and Joseph Reed, who served as an aide to George Washington. Opinions, like this perpetual union, are not so perpetual after all. Priced at $2,500.

Here are five of the reasons these men's opinions changed so drastically over the next decade. Item 53 consists of five bound acts from King George III promulgated in 1774. They became known as the Intolerable Acts. Four dealt specifically with Massachusetts, closing the Port of Boston until the East India Company was reimbursed for losses suffered during the "Tea Party," providing for the quartering of British soldiers, and making changes in Massachusetts' charter. The fifth extended the boundaries of Quebec and offered greater tolerance for ethnically French Catholics, seen as a slap in the face of colonists south of the Canadian border. The King had hoped these rules would impose order on the colonies, but the effect was opposite, so incensing the colonists that any hope of reestablishing that "perpetual union" was over for good. $18,500.

Much of our earliest information about inland North America came from missionaries, Jesuits in particular, but the Recollets were also represented. Item 33 is the account of the difficult journeys of one such missionary, Emmanuel Crespel: Voiages du R.P. Emmanuel Crespel, dans le Canada et son Naufrage en revenant en France, published in 1742. Crespel was sent to Quebec, serving two years at what is today Sorel (then Fort Richelieu). After two years, he was sent to the Great Lakes with forces fighting the Fox Indians as their chaplain. He was eventually called back to France, but was shipwrecked before leaving Canadian waters. He and the few that survived managed to reach Anticosti Island in the St. Lawrence Gulf, where they endured the winter before returning to the mainland. He finally did make it back to France, but quickly returned to Quebec where he spent the remainder of his life. This book recounts Crespel's adventures, shipwreck included, along with information about the Indians and the lands he visited. $6,250.

Item 71 is a diatribe against Thomas Jefferson, printed during the presidential campaign of 1804: Observations upon certain Passages in Mr. Jefferson's Notes on Virginia, which appear to have a tendency to subvert religion, and establish A False Prophecy. Author Clement Moore was one of those who questioned Jefferson's religious beliefs, and found them insufficiently devout by his standards to serve in such high office. Moore's cranky religio-political writings have long been forgotten, but Moore is still remembered as the author of The Night Before Christmas, "quite a different work," as Kahn notes. $650.

It's never fun to be on the losing side of a war. England's military leaders had much explaining to do after the American Revolution. The pamphlet war between Henry Clinton and General Cornwallis is legendary, each attempting to blame the other for the disastrous defeat at Yorktown. Here is another attempt to pass the blame: A State of the Expedition from Canada, as laid before the House of Commons... This work was produced in 1780 by General John Burgoyne, who led British troops to a disastrous defeat at Saratoga in 1777. The attempt was to divide the colonies in half by controlling a corridor from Canada to New York City. Instead, the colonists won a decisive victory at a time when it appeared their revolution might be heading for a total collapse. In his book, Burgoyne lays the blame on his having poorly trained and insufficient numbers of troops. Item 21, $11,000.