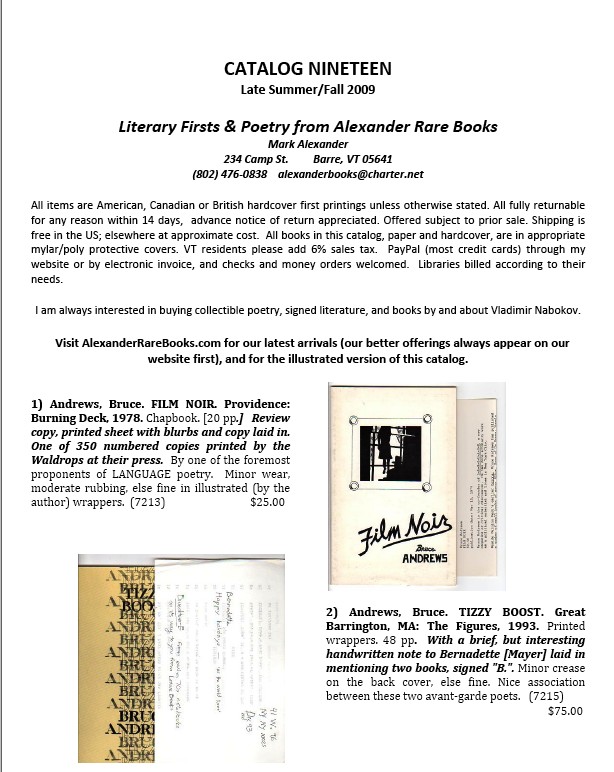 Recently released was Catalog Nineteen of literary first editions and poetry from Alexander Rare Books. Offered are works primarily from the 20th century, mostly from the second half. Unlike the typical catalogue we receive, this one is filled with writers who are still alive! There may be great works yet to come to be added to your collection at a later date. For others, their careers have been completed and their reputations sealed. We may focus in our review on those whose careers are now fully developed, but there are more recent authors and poets well represented in this latest Alexander catalogue.

Item 62 is a copy of the signed DeLuxe edition of Robinson Jeffers' Dear Judas, copy number 4 of 375 copies printed. It was published in 1929, at a point when Jeffers was at the height of his recognition. It is said he rivaled Whitman's popularity at his peak. Jeffers had a less than favorable view of man, whom he felt self-centered and egotistical, but had a love for nature, particularly California where he lived. $200.

His themes made Jeffers a controversial poet, though it may have been his frank discussion of taboo sexual topics more than his underlying views that made him so. His most notable exposition of his views came in 1927 with the publication of The Women at Point Sur. Item 63 is a copy signed by Jeffers from "Tor House, Carmel California." This was the home Jeffers built by the sea, a place where he could appreciate nature. If Jeffers seems somewhat forgotten today considering his once great popularity, he opposed the U.S. involvement in the Second World War, obviously not a popular position. Though he lived until 1962, he never regained the acclaim he received prior to the war. $950.

Item 14 is the Collected Poems, 1924-1974 of John Beecher. Though born in New York, Beecher moved as a youth to Birmingham, Alabama, when his father was sent there to manage a steel mill. His parents expected Beecher to become an industrialist, but he was impacted more by the poor working conditions in the mills and the bad treatment of blacks in the South he witnessed. In this regard, he was closer to earlier members of the Beecher family, Harriet Beecher Stowe of Uncle Tom's Cabin and the Reverend Henry Ward Beecher, another noted abolitionist. His views would get Beecher blacklisted during the McCarthy years, but he remained true to his ideals, his works reflecting his commitment to social justice. This copy of Beecher's poems is inscribed by the author. $135.

Here is a first edition of Birds of America, priced at $50. Okay, it's not that Birds of America. A first of Audubon's version will cost you over 5 million dollars, not 5-0 dollars. Item 81 is Lorrie Moore's version of the Birds of America, and it is a very different book. It may not have such beautiful artwork, but it contains a selection of critically acclaimed short stories, including one which won the O. Henry Award in 1998. This copy is signed by the author. $50.

Item 61 is The Lost World: New Poems. It was the last collection of new poems from Randall Jarrell, released in 1965. Jarrell had been writing poetry for three decades, but it wasn't until the last few years of his life that he finally achieved much recognition for his poetry. Prior to that, he was better known as a critic. Unfortunately, depression struck him around the same time as success, and after an unsuccessful suicide attempt, he was struck and killed by a car in the same year this final new collection was published. $25.

Alexander Rare Books may be contacted at 802-476-0838 or AlexanderBooks@Charter.net. Their website is www.AlexanderRareBooks.com.

You will find many of Alexander Rare Books' books listed in "Books For Sale" on this site. Click here.