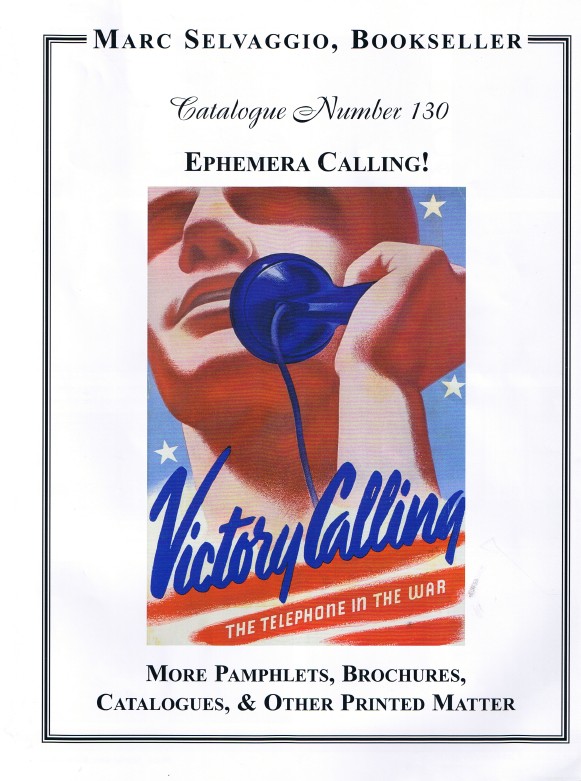 Talking our way to victory in 1943 on the cover of Marc Selvaggio's latest catalogue.

Marc Selvaggio, Bookseller, has issued his 130th catalogue: Ephemera Calling, subtitled More Pamphlets, Brochures, Catalogues, & Other Printed Matter. There are several groupings of material delineated, including entertainment, advertising, land promotion, catalogues, tourism and medicine. What we have here is various types of commercial promotion, some subtle, some not. Since the days when most of us stopped being subsistence farmers, our lives have revolved around finding ways to separate other people from their money. Here you will find hundreds of examples of how this was attempted in an earlier era. You may wonder how anyone succumbed to some of these appeals, but if you look at advertising today, you may find that we have not advanced all that far in terms of gullibility. Now for a few of the items we found in this catalogue.

Item 146 announces a spectacular new development in cash registers: National Cash Register. Change Computation Builds Customer Good Will. A youngster exclaims, "Mother look! This register figures our change." Indeed, this 1950s cash register printed out a receipt that showed you the amount of change due. This was certainly a major development at the time, though something that virtually all cash registers perform today. So, if you want to know whom to blame for the fact that so many clerks today are unable to figure out change themselves, look to National Cash Register. Priced at $200.

Eddie Cantor was a comedian, actor, singer and writer of great celebrity in the first half of the 20th century. For whatever reason, he seems to have been mostly forgotten, but he was a multitalented star of the theater, film, radio, and then television for four decades. Item 93 is one of his books, Cantor's Comics, published in 1936. It's filled with many of his radio jokes such as this one:

"Eddie: 'Why do you always say fair lady when you speak to a girl?'
Man: 'Force of habit - I used to be a street car conductor.'"

You might not think you could win a war by talking on the telephone, but that's how victory was achieved in World War II. Item 76 is Victory Calling. The Telephone in the War. This piece, extolling the virtues of telecommunications, was published by AT&T in 1943. "In foxhole and in factory, dependable communication is absolutely essential to the victory we must win." How much more powerful we would be today when every soldier can carry a cell phone into the foxhole. This item is pictured on the catalogue's cover (click the thumbnail image above to see). $65.

Here's a question for you: in what business are the Warner Brothers? The answer, of course, is corsets. Sure, we all know of the later pretenders whose name is associated with films, but in the 19th century, Warner Bros. meant corsets. Formed by a pair of physician brothers around 1873, they may have been the largest corset manufacturer in the country by the 1890s. Item 296 is Modeled to Fit, printed in 1894. It features their Coraline Corsets. Coraline, manufactured from the fibers of a South American plant (ixtle), was supposedly healthier and more comfortable than corsets stiffened with whalebone. Of course, styles change and corsets are no longer as popular as movies, so we associate the Warner name with the filmmaking rather than the corset-making brothers. But, shed no tears for these Warner Bros. Their business lives on. Now known as Warnaco, their company is one of the world's largest clothing manufacturers, featuring names such as Calvin Klein, Speedo, Chaps, and Warner's. $60.