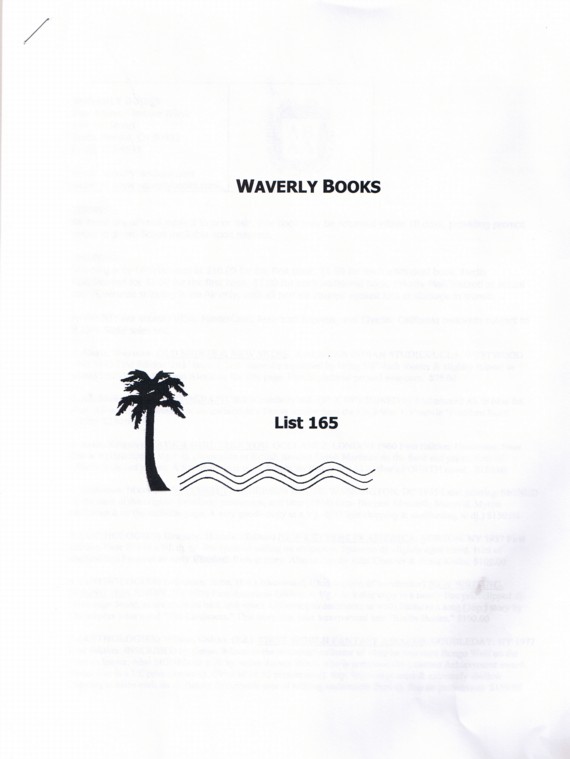 No need to steal this catalogue. It's free.

Waverly Books has issued List 165, a new collection of 181 books and ephemeral items. The focus is primarily on literature and film, but with a bow to photography, art, music, sports, travel and other fields. There are also many signed items for those who prefer autographed pieces. Here are a few of the items you will find in this latest collection of 181 books, filmscripts, manuscripts and photographs from Waverly.

Item 136 is a screenplay for a new-old movie, that comes with a "riot of signatures." It is a screenplay for Mel Brooks' 1976 film, Silent Movie. In typical Brooks absurdity, his character sets out to save a small studio from being bought out by "Engulf and Devour" (a thinly disguised parody of the once enormous conglomerate Gulf and Western). His means of saving the studio is to produce the first silent film in 40 years. Like its subject, Brooks' film was itself a silent movie, save for one word spoken by the most famous of all mimes, Marcel Marceau. The film is filled with sight gags, such as the old comedic silents depended upon for laughs. Brooks managed to gather a large cast of famous names for his film, some appearing in roles as themselves. That has led to the collection of tipped-in signed plates of actors and actresses who appeared in this film, including Brooks, Dom DeLuise, Sid Caeser, Anne Bancroft, Burt Reynolds, Henny Youngman, Bernadette Peters, James Caan, and others. Priced at $350.

If this seems absurd, how about all of those people who take Star Trek seriously? Here is the ultimate in taking Trekking seriously: The Star Trek Guide, a third revision from April 17, 1967. This was a guide prepared for writers of Star Trek scripts. It contains all the arcane "facts" of this imaginary world, so that writers' scripts would remain consistent with all the details of previous episodes. Item 157. $250.

Item 12 is a most humorous, albeit sarcastic letter from the illustrator and author Rockwell Kent. It is important to note with this letter that Kent had veered into radical, leftwing politics by the 1930s, when this letter was written, so he wouldn't have had much love for corporate America. It is a 1936 letter to Esquire magazine editor Arnold Gingrich (whom Kent has misspelled "Gringrich"). Evidently, Gingrich had sent out the ultimate of uninteresting gifts to some of the magazine's contributors, a set of cufflinks. Writes the acerbic Kent, "Now that I have, thanks to you, a swell set of cuff links, I'll get myself a swell shirt to wear them in, have my dinner jacket (that's the best I can boast) pressed, and sit around and wait for an invitation to a function... How would you like a fabric picture of me for Esquire with cuff links glued on? Or a miniature drawing of the Herculean artist-writer-explorer, R.K., brandishing the cuff links over his head like dumb bells? Anyhow I am all for Esquire's policy of trying to make its contributors look like the gentlemen that its editors so obviously are." Ouch. $650.

Everyone in the book trade is familiar with the classic Abbie Hoffman title "Steal This Book." Many bookstores found it unprofitable to stock this item when it came out as too many browsers took the title seriously. Few took the title of this later book so seriously. Item 69 is the lesser known work by the 60s radical cum humorist entitled Steal This Urine Test. In this 1987 book, Hoffman attacks the accuracy and constitutionality of drug testing, newly in vogue then, far more widespread now. Hoffman died a few years later when his body failed the ultimate drug test, an overdose. This first edition is signed by Hoffman. $125.