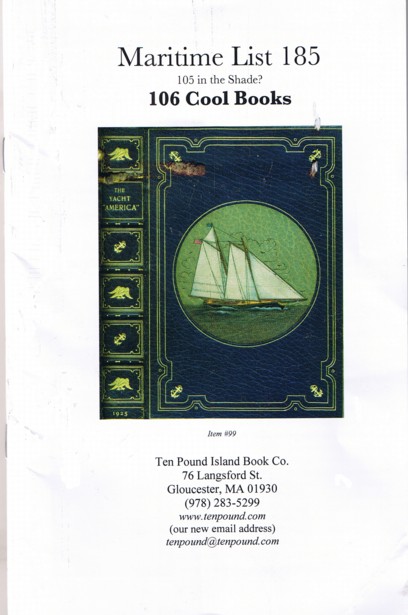 Some "cool" books from the Ten Pound Island Book Co.

The Ten Pound Island Book Company has issued a new catalogue: Maritime List 185, or 106 Cool Books. "Cool books" are not necessarily those about voyages to the Arctic, though they may be. Ten Pound describes them as books that when you find one, your reaction is "Oh, cool!" So, here we have 106 opportunities to repeat that expression. Now, we present a few of those 106 examples of coolness.

For those who appreciate an isolated existence, there is Pitcairn's Island, and the Islanders in 1850. Author Walter Brodie was sailing from New Zeeland to the gold fields of California when his vessel was stranded on this remote island. The mutineers from the Bounty had used this island as a hiding place 60 years earlier. They had settled the island with their Tahitian wives, evading the long arm of British justice. However, most survived but a few years, and by 1850, the last of the Bounty mutineers was long gone. The people who did still inhabit the island were the mutineers' descendents. Brodie gives detailed descriptions of the descendents and shipping records of vessels that stopped at this remote location. Item 15 is a third edition, identical to and published in the same year as the first (1851). Priced at $350.

Item 42 is William James' Full and Correct Account of the Chief Naval Occurrences of the Late War... This is an 1817 work and the "late war" was the War of 1812. However, not everyone agreed that this was a "correct account." James recounts the battles from a British perspective. James R. Soley, a former American Acting Naval Secretary and maritime scholar described the tone of James' book as "...offensive and its comments are of the same scurrilous character." Now, that makes it more interesting. $250.

While the above item may, or may not, be classified as "fiction," the next piece unquestionably is. Item 22 is The Child of the Bay: or, the Sailor's Protege. This title, published in 1859, came from four issues of The Weekly Novelette, issued together with title wrappers. Author Sylvanus Cobb, Jr.'s fiction was very popular at the time. According to the Dictionary of American Biography, "As literature his work is of no value, but as the first American to apply quantitative methods to the production of fiction, he has his place in the general history of American printed matter." Quantity trumps quality. $200.

Here is the story of another young man who went to sea, but this one is presumably true. Item 44 is Ebenezer Beriah Kelly: An Autobiography, privately published in an apparently small edition in 1856. Kelly is not a celebrity, never achieved any particular standing, but he led a most remarkable life, even for his era. Running away from indenture and home at the age of 13, he got a job as a cabin boy, thereby beginning his life at sea. He would serve on the maiden voyage of the Constellation, be impressed into the British Navy and serve under Nelson ("rather tyrannical in the government of his men") at Trafalgar, work on a convict transport ship to Australia (a "hell ship"), was held captive in Tripoli, worked on a privateer and a whaling ship, before finally retiring to land, working as a farmer, cook, and wood chopper until an old leg injury incapacitated him. This book was written, likely for friends, when Kelly was age 73. $1,250.

For a biography of the aforementioned "tyrannical" Lord Nelson, there is The Life of Admiral Lord Nelson, K.B. from His Lordship's Manuscripts. This three-volume set by James Stanier Clarke and John M'Arthur was published in 1809. Nelson is noted for leading the British Navy to perhaps its greatest victory ever, the Battle of Trafalgar against Napoleon's forces. It established the Royal Navy's supremacy at sea. Unfortunately, it also marked the end of Nelson, who was shot by a marksman. Nelson is considered one of Britain's greatest heroes, remembered more fondly by his countrymen than by Kelly, who perhaps bore a grudge, being an impressed American. Item 21. $1,250.

Ten Pound Island Book Company may be reached at 978-283-5299 or tenpound@tenpound.com. Their website is www.tenpound.com.