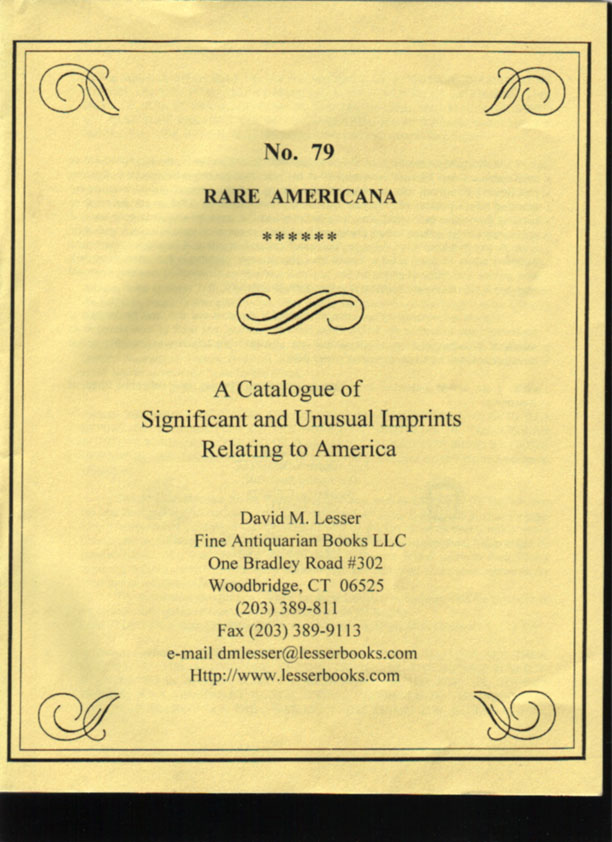 David M. Lesser Fine Antiquarian Books has issued “A Catalogue of Significant and Unusual Imprints Relating to America.” That’s an appropriate title, as it covers many important events of 19th century and earlier America, yet few are books you are likely to come across anyplace else. Here are a few of the titles you will find inside.

Item 132 is a hauntingly prescient address from South Carolina, written almost 30 years before the Civil War (1832). It is An Address of the Washington Society to the People of South-Carolina. The Washington Society of South Carolina was a pro-Union southern group which supported President Jackson during the Nullification Crisis. That was when South Carolina first asserted its “right” to nullify federal laws, a right which if acknowledged, would have effectively destroyed the Union. This time, South Carolina, lacking support from the rest of the South, would back down, though things would be different 29 years later. In this pamphlet, the Society warns that an attempt to implement Nullification “must end in bloodshed, disgrace, and ruin.” Secession, they said, would result in “defeat and disgrace, or in the establishment of a military despotism in South-Carolina, and the road to either alternative lies through bloodshed and civil war.” Yes, yes, and yes. Priced at $450.

If it is today hard to understand how Southerners could miss the logic of the above argument, even if they didn’t like it, item 128 displays some of the blinding passions which clouded men’s reason. Also from South Carolina, but this time the year is 1860, is Rev. Thomas Smyth’s The Sin and the Curse; or, the Union, the True Source of Disunion, and Our Duty in the Present Crisis. In it, Smyth informs us that “the evil and bitter root of all our evils is to be found in the infidel, atheistic, French Revolution, Red Republican principle, embodied as an axiomatic seminal principle – not in the Constitution, but in the Declaration of Independence.” What was that consummately evil principle contained not in the Constitution but in the Declaration of Independence? That “all men are created equal.” $375.

The days just before the Civil War are fascinating because, from hindsight, we can see the train wreck towards which the nation was now barreling at full throttle. Here’s the Address of Hon. Albert G. Brown, before the Members of the Legislature of the State of Mississippi, November 8, 1859. Not surprisingly, Brown describes the Republicans as “a fanatical horde who trample without remorse on the Constitution.” However, he then goes on to criticize the Northern Democrats of Stephen Douglas for favoring popular sovereignty in the territories with respect to slavery, rather than recognizing it as a property right which must be enforced regardless of the wishes of the local population. Ultimately, it would be an unwillingness to bend on slavery in the territories, rather than the existence of the institution in the South itself, which would lead the South into a ruinous civil war. Item 13. $250.