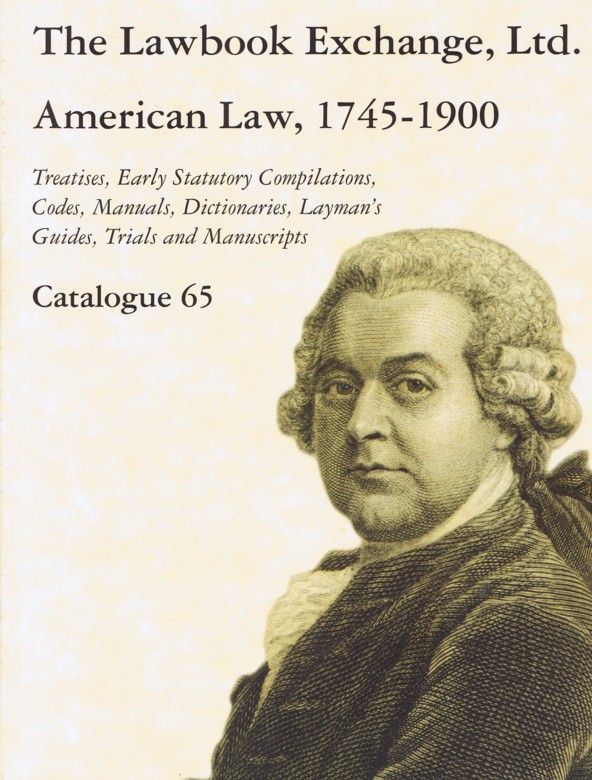 The Lawbook Exchange has issued an extensive new catalogue: American Law, 1745-1900. This catalogue is about three times the size of the typical Lawbook Exchange catalogue, with all types of legal works, ranging from technical explanations and guides of niche areas of the law, discussions of the American Constitution and other major political documents, to accounts of sensational murder and sex trials. There are items here for the legal scholar, amateur, and those seeking a look at the titillating trials of another era. Here are a few of the items offered, with a focus on the less legalistic of works.

Who needs a lawyer, anyway? Giles Jacob offers a way around these expensive middlemen with Every Man His Own Lawyer. Jacob's work was very popular in England, going through six editions before this first American edition was published in 1768, 32 years after the first London. Jacob felt not only that providing such a guide would enable average folks to obtain justice, but that a more legally learned society would be a more just one. Item 13. Priced at $2,000.

Item 27 was published at the urging of Benjamin Franklin in France shortly after the conclusion of the American Revolution. It was his attempt to display the principles on which this new nation was founded, a bit of propaganda on its behalf. Printed in just 600 copies, the title is Constitutions des Treize Etats-Unis de l'Amerique (Constitutions of the Thirteen United States of America). It was printed in 1783, well before the writing of the federal constitution, so the founding principles of this nation still had to be shown through the individual constitutions of the thirteen original states. $2,700.

The new nation would soon find itself in disputes with its revolutionary enemy, England, and friend, France. Those two nations were always at each other's throat, and America found itself being dragged into the dispute as each nation interfered with neutral America's shipping to the other side. Item 38 is William Barton's A Dissertation on the Freedom of Navigation and Maritime Commerce... Barton argues for the freedom of navigation of neutral ships during time of war, a right repeatedly ignored by the European powers. This book was published in 1802, and a decade later, this issue would lead to America's declaration of war against England and the War of 1812. The British, like the French, not only interfered with neutral shipping, but went a step further by impressing American seamen into service in the British navy. They claimed that anyone born a British citizen (as were all Americans born prior to the Revolution) could not renounce their English citizenship and therefore could be impressed into their military service. Americans disagreed. $1,750.

Item 57 is a bound collection of congressional speeches from 1859 and 1860, mostly focused on slavery and the coming great troubles for the still young nation. This collection was put together by John Bullock Clark, a Congressman from Missouri. While the opinions of northerners are well-represented, and Missouri stayed loyal to the Union despite being a slave state, Clark himself went with the Confederacy. He was one of just five congressmen expelled from the House for taking up arms against the nation. In turn, Clark then "represented" Missouri in the Confederate Senate, but returned to private practice of the law after his side was defeated. $3,500.