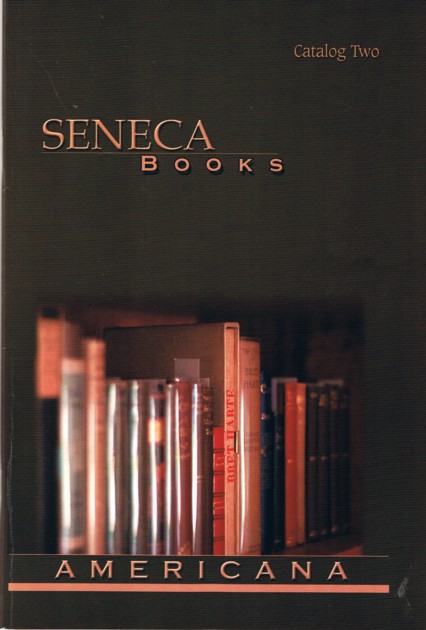 This month we review our first catalogue from Seneca Books, though it is their second: Catalog Two Americana. Seneca Books and their proprietor Peter Bollier are located in Boxborough, Massachusetts, west of Boston, and specialize in 19th century Americana and literature. If the British had succeeded at Lexington and Concord and kept heading west, generations of schoolchildren would be reading about the Battle of Boxborough, but the patriots never let them get that far. That is why you aren't familiar with this quaint New England town. Still, there was much American history made in this area, so it is a great place for a bookseller specializing in Americana. Here are a few of the varied works offered in this new catalogue.

The Molly Maguires were an underground, loose-knit group of militant, sometimes violent Irish immigrant coalminers working in the mines of Pennsylvania. Treatment of miners in the 19th century was deplorable - dangerous conditions, low wages, and often forced living or buying in company towns and stores. The poor Irish immigrants were particularly subject to abuse by the large industrialists as a result of their desperate situation. Out of this arose the Mollies, but the coal companies controlled the press and did a good job of publicizing the excesses of the Mollies while disguising their own. Item 11 is one such example, an 1877 pamphlet entitled A Full Account. The Lives and Crimes of the "Mollie Maguires." The Confessions and Execution. With an Account of the Organization of this Terrible Secret Society. This pamphlet describes the crimes of the Mollies and contains a lurid description of the executions of several members. Priced at $600.

Mill work wasn't all that much better than mining at the time. Item 22 is a broadside headed Regulations to be Observed by All Persons Employed by the Proprietors of the Stark Mills, circa 1870s. Among the requirements of working for this New Hampshire manufacturer was living in company owned boarding houses and attending public worship. Even profane language was banned for those working in the mills, something the mining companies must have had the good sense not to demand. All workers were required to sign this agreement before being hired. $125.

Sarah H. Furber was a young New Hampshire mill worker who suffered a cruel fate, though not at the hands of her employer. Young Sarah was seduced by a wicked man. Pregnant and unmarried, she went to a local doctor who performed a botched abortion. Sarah died, but lives on in this 1848 pamphlet, The Manchester Tragedy. A Sketch of the Life and Death of Miss Sarah H. Furber, and the Trial of Her Seducer and Murderer. Item 7. $750.

The Susan Anthonys and Cady Stantons are revered figures for their role in women's suffrage, but who remembers people like Augustin H. Parker, who battled for the other side? Parker was not alone, or at least he claims in this broadside An Appeal To Men that at least 80% of Massachusetts women were also against women's suffrage. One suspects he reached this conclusion without conducting a poll. Nonetheless, he claims that women do not want men to force the ballot upon them, that they have faith in their husbands, fathers, etc., to decide political matters and wish to maintain their right to be free of the burdens of government. In a sign of great sympathy for womankind, Parker pleads to his male compatriots, "Let us not force upon them something from which no good can come..." and "Let us not ask women to leave the sphere for which nature designed them." Parker's view carried the day in this 1915 suffrage vote in Massachusetts, but Massachusetts women would be dragged into the voting booth against their will just five years later when they were granted the vote on a national basis by 19th amendment. Item 93. $150.