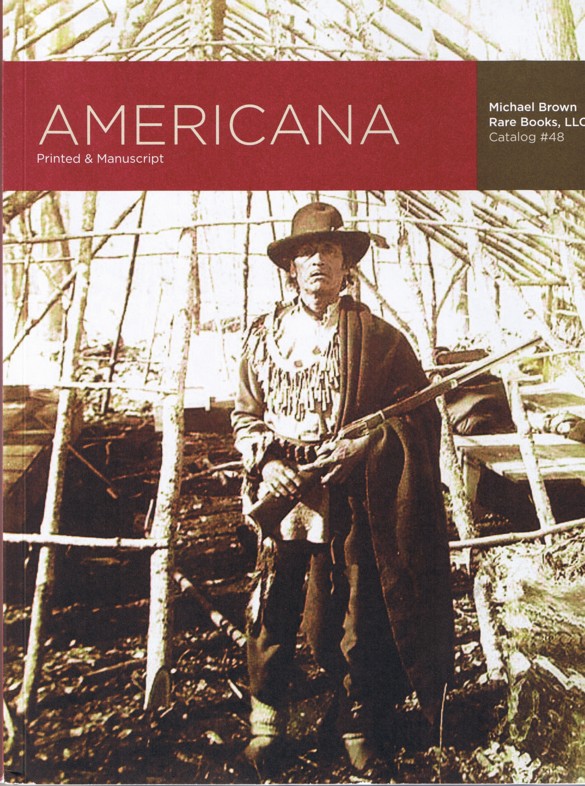 A detailed catalogue of Americana from Michael Brown Rare Books.

Michael Brown Rare Books has issued their Catalog #48 Americana Printed and Manuscript. This is an exceptional catalogue. Brown has supplied some of the most detailed descriptions we have seen in a bookseller's catalogue. Offered are 177 pages of description for the 196 pieces offered. Manuscript items in particular are described in great detail. Included are numerous diaries and the like of individuals whose lives were certainly difficult and challenging by today's standards. Along with the books and manuscripts, you will find other types of related material, including broadsides and photographs. This is an outstanding catalogue for an Americana collector. Now here are a few samples from its pages.

Item 64 is a very personal look at life in more difficult times. It is the diary from 1853-54 of Mary Chase, a schoolteacher in Hanover, Massachusetts. Mary is filled with self-doubt. "I do feel so thoroughly discouraged sometimes that I know not what to do with myself. I do not know how to keep school," she writes. At another point she reveals, "I often think my life is worthless to myself and others. I do not for either accomplish any good." She finally gets a break from her sorrows in July of 1854 when she travels to Maine and attends a large abolitionist rally. She notes, "Harriet Beecher Stowe, the author of Uncle Tom's Cabin, addressed an estimated 'six to ten thousand' people convened in a grove near East Livermore." Priced at $750.

Item 187 is a declaration of the first international war in which Americans were called on to participate, though they were still colonial Americans at the time. The broadside is headed His Majesty's Declaration of War against the King of Spain, printed in 1739. It lists a litany of sins perpetrated by the Spanish. This was the infamous War of Jenkins Ear. The Spanish, for whatever reason, lopped off the ear of British Captain Robert Jenkins, likely with good cause. Years later, Jenkins presented his well-preserved ear to Parliament, which outraged, declared war on Spain. This simplifies it a bit, but the war was just about this ridiculous. $6,500.

Item 39 is a most unusual, child-like appeal not to murder. It is a circa 1910-20 broadside in English and Inuit imploring the natives not to kill. It states that the King has commanded "Thou Shalt Do No Murder." "Why does he thus speak?" it asks. It then explains, "Long ago our God made the world, and He owns the world. The people also he made, and He owns them. The King of the land is commanded by God to protect the people well." Instead of repaying a murderer in kind, the broadside instructs people in the proper procedure: "But if a man kills a man, the King sends his servants, the police, to take and kill the murderer. But ye do not kill the murderer..." This logic must have been baffling to the Inuit. $1,850.

Martha Gertrude Swift Nuckols of Ashland, Virginia, was an unusually understanding and sympathetic woman. Her husband, Henry, was not kidding when he told her he did not want an "old wife." He married his first wife when she was just 17, and after she died in their first year of marriage, he remarried Martha, then only 16. Martha writes in her diary that she loves to hear about Bettie, his first wife, and would not want him to forget her. "Though I never saw her, I love her memory because dear to him. He says he loves me as well as he did her. I never expected, or wished him to do that, for it seems right that he should love her best." Nevertheless, she finds herself deeply in love with Henry and comes to believe that Henry truly does feel the same toward her. If she has any regrets later in life, it is for marrying quite so young, as she thinks "other ideas were stunted or cut short in their growth," leaving her "the ignoramus of the family." Martha Nuckols' manuscript journal runs to 157 pages from 1869 through 1900. Item 186. $1,250.