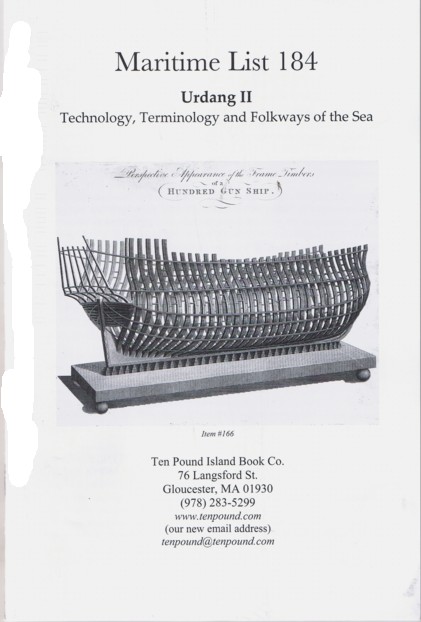 The Ten Pound Island Book Company has issued its second catalogue composed primarily of material from the Laurence Urdang collection: Maritime List 184. Lawrence Urdang was the lexicographer who created the first dictionary composed with the aid of a computer, the 1966 Random House edition. Late in his life, he began work on a maritime dictionary. To find every seafaring word and phrase he could, he began collecting maritime books, hundreds of them. They range from modern to centuries old. Urdang did not live to see his maritime dictionary completed, though he lived to be 81. However, he did leave numerous computer files, so perhaps someone else will one day complete his project. For now, the books from his collection are available to the next generation of maritime collectors.

Last month, we published a review of the first Urdang catalogue. Click here to see it. Here are some items from the second catalogue.

Item 22 presents a sad tale of what can happen when you fail to pursue the enemy to the utmost in war, at least as of a few centuries ago. It is The Trial of the Admiral John Byng, at a Court Martial... published in 1757. This is an account of Byng's court martial. John Byng was the son of an admiral himself, who rose in naval ranking without seeing much action. At the outbreak of the Seven Years War, he was sent with a small fleet of ships to bring reinforcements to the British island of Minorca in the Mediterranean. The French, who were much closer to Minorca, were in the process of overrunning this British outpost. Byng was not given a great set of ships or the number of men he really needed. Off the coast of Minorca, he was met by some French ships and a skirmish ensued. After an indecisive engagement, Byng chose to retreat for repairs and reinforcements, rather than chasing the French. Unfortunately for him, the Articles of War provided the ultimate penalty for those who did not do their utmost to pursue the enemy. Byng was convicted, and despite his standing, was executed by firing squad. Priced at $350.

It was not war or shipwreck that was the major threat to sailors in the New World. It was disease. One of the unpleasant side effects of visiting new lands is the opportunity to share new diseases. Item 74 is William Hillary's Observations on the Changes of the Air and Concomitant Epidemical Diseases in the Island of Barbados. This is a second edition from 1766. It includes a treatise on "putrid bilious fever," better known today as yellow fever, which was found in the West Indies and became a terrible killer. Other illnesses covered include lead colic (a form of lead poisoning) and hepatitis. $350.

One bad disease deserves another. Item 95 is An Essay on Diseases Incidental to Europeans in Hot Climates. With Methods of Preventing Their Fatal Consequences, by James Lind. This is the first American edition, published in 1811. Lind was an 18th century British physician who conducted trials to determine ways to reduce health risks at sea. He is best known for his work on scurvy, and while he didn't quite get it right (he thought acids were the cure), his belief led to using citrus fruits which contain the needed vitamin C. Lind also emphasized the need for cleanliness and good ventilation on ship, and discovered that sea water could be made potable through evaporation. $500.

Item 31 is a copy of Walker's Manly Exercises, by "Craven" (Donald Walker). This is an early edition (1835) of a popular book first published in 1834. Of note, it is the first book on rowing, although it covers many manly ways of exercising, such as swimming, running, skating, gymnastics, and boxing. We assume this book was targeted at the leisure class, since most people were engaged in subsistence farming at the time and would not have needed to find ways outside of their labors to get exercise. $250.

You may reach the Ten Pound Island Book Company at 978-283-5299 or tenpound@shore.net. Their website is www.tenpound.com.