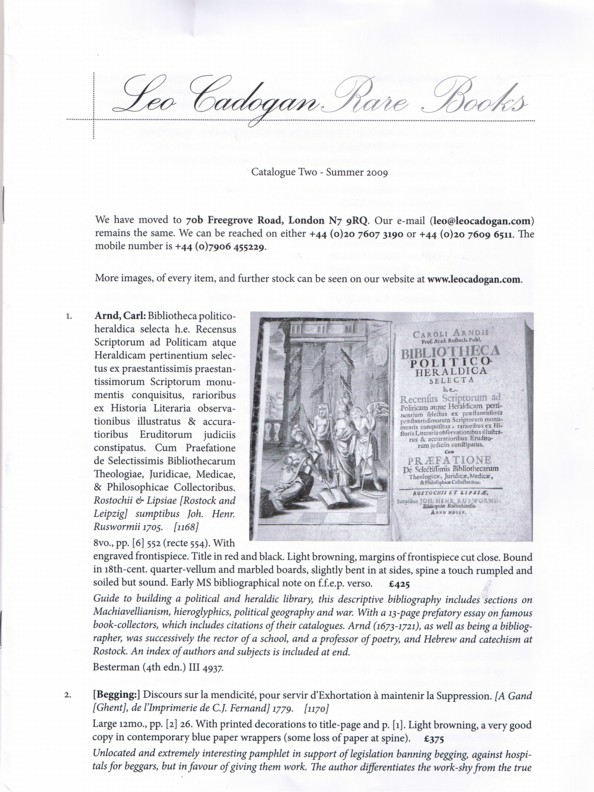 Just in time for the advent of summer is the latest catalogue from Leo Cadogan Rare Books: Catalogue Two - Summer 2009. Cadogan does not specialize in a particular field, but the overwhelming majority of their books are easily defined as "antiquarian," mostly from the 16th through the 18th century. Considering the time period and Cadogan's London location, you would expect primarily English and European texts, but this collection also contains a large number of early Latin American items. Many involve the theological, political, and national issues of a time when tolerance of differing opinions was limited, and European nations seemed always to be at war with one another. These are some of the antiquarian writings Cadogan is serving up for the summer.

Item 22 is a very odd biography of English kings by Dutch physician Johan van Dueren: Vertoog van de Ongelukkige Regeringe... published in 1696. Described are the lives of six kings whose names are all their second coming - William II, Henry II, Edward II, Richard II, Charles II, and James II. Cadogan speculates that perhaps the reason for this odd manner of selecting subjects was a veiled excuse to write about James II, who had recently been forced out by William III. William had invaded England from the Netherlands where he had ruled as William of Orange. Priced at £480 (or roughly $790 in U.S. dollars).

Item 31 marks the outbreak of the war which would remove Sweden from the stage as a world power. Not everyone is aware, but at the beginning of the 18th century, Sweden was still a major international force. Item 31 is Discussio Criminationum, quibus usus est Moscorum Czarus, cum bello Svecis... by Olof Hermelin. At this time, Sweden controlled the Baltic Sea, and many of the Baltic states, including Estonia, from where Hermelin writes this pro-Swedish peace. On the other side of this dispute was an alliance headed by Russia, along with many of greater Sweden's neighbors, Denmark-Norway, Poland-Lithuania, and Saxony. Despite the alliance, Sweden's King Charles XII achieved many victories in the opening years of the Great Northern War. However, it would drag on for two decades, and the tide turned as Peter the Great and his allies gained the upper hand. By war's end, the Swedish were forced to give up their possessions in the area, Russia had gained access to the ocean through the Baltic Sea, and Russia was now the major power in northern Europe, not Sweden. Hermelin's book was published in 1700, at the beginning of the war, when the situation still looked favorable for the Swedes. £575 (US $946).

Item 55 is Pragmatica que su Magestad manda publicar sobre la reformacionex exceso... a 1674 publication of Spanish sumptuary laws. These were laws designed to prohibit what we would now call "conspicuous consumption." Specifically, these targeted dress, such as expensive silks, and other luxurious appearing items. At times, penalties were harsh, such as four years banishment to Africa for a first offense of painting or gilding a coach, and eight years in the galleys for a second offense. These laws were generally designed to prevent commoners from imitating royalty, but also had some practical purposes. In this case, the rules were designed to prohibit trade with France. It should be noted that sumptuary laws tend to run against human nature, and as a result generally are of limited success. £245 ($403).

Item 20 is a very ancient work republished for more modern concerns: De la singularite des clercs, ou de l'obligation ou sont les ecclesiastiques de vivre separez des dames. This is a call for clerics to live singularly, that is, apart from women. The work has been attributed to St. Cyprian of Carthage, a third century bishop, though this is by no means certain. Whoever wrote it, it is very old, and goes back to a time when celibacy was not always demanded of the clergy, and certainly not always observed. This edition was printed in 1718, at a point when women were forbidden to the clergy of the Catholic Church, but some felt the prohibition should be reconsidered. £260 (US $427).