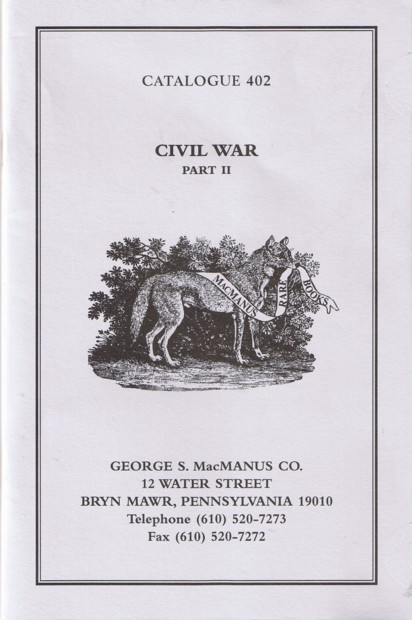 Part Two of the Civil War from the MacManus Co.

The George S. MacManus Company has issued their Catalogue 402. Civil War Part II. A while back, Clarence Wolf of the MacManus Company purchased much of the inventory of the late Civil War bookseller Douglas O'Dell of Chapel Hill Rare Books. Combining this southern-oriented inventory with his own has created a large collection of works pertaining to the conflict, including memoirs of many foot soldiers and individual regiments. Although there are over 500 items in this catalogue, it is not nearly enough space for the range of material offered. This selection is Part II, Part I having been issued a few months back. This grouping ranges from the memoirs of Private Isaac Hermann, a Jewish immigrant who fought for the Confederacy, to the memoirs of Charles O'Ferrall, who recounts his many years in Virginia, including the Civil War. In other words, this is the middle of the alphabet, meaning there is at least one more Civil War catalogue to go. Here are a few of the books you will find in Part II.

Stonewall Jackson was one of the best tactical generals of the Civil War. Serving the Confederacy, he masterminded several victories early in the war. He was the most important and popular of southern generals after Robert E. Lee. However, a misidentification by a sentry at night led to his accidental shooting in the spring of 1863. Eight days later, he succumbed to his wounds. The loss was enormous. It is unlikely that even Jackson could have prevented the eventual outcome of the war, but the South might well have had a better result at the key upcoming battle at Gettysburg if it still had access to Jackson's genius. Item 35 is "Stonewall" Jackson, Late General of the Confederate States Army, by Catherine Hopley. This is a second edition, published the same year as the first (1863), and was one of the first tributes to him published after he died. Priced at $1,000.

Jackson would receive many more tributes over the years, but perhaps the most personal is Memoirs of Stonewall Jackson. By His Widow Mary Anna Jackson, published in 1895. Mrs. Jackson outlived her husband by over 50 years, never remarrying. Mrs. Jackson wrote this book, which contains many personal letters, "for his grandchildren," though it has been read by many others. Item 93. $350.

Perhaps Jackson's physician had access to this guide: A Manual of Military Surgery Prepared for Use of the Confederate States Army, published in 1863. In those days, it doesn't seem that there was much in the way of surgery other than amputations. Jackson had to have his left arm removed after his injury, though ultimately he still lost his life from pneumonia. MacManus notes that this manual contains "thirty full page plates illustrating procedures for the amputation of hands, feet, arms, and legs, and the treatment of various battlefield wounds caused by swords, miniballs, etc." Be thankful you live in the 21st century. Item 404. $3,500.

Even years later, some southerners remained unreconstructed. Item 312 is The Great Parliamentary Battle and Farewell Addresses of the Southern Senators on the Eve of the Civil War. Published 40 years after the war ended, author Thomas Ricaud Martin says the purpose of this collection of speeches "is to call attention to the genius and character of the distinguished Southern Senators of antebellum days." $65.

If Martin sounds unreconstructed, he was nowhere near as angry still as Walter Neale, who presented The Sovereignty of the States: An Oration Address to the Survivors of the Eighth Virginia Regiment, While They Were gathered about the Graves of Their Fallen Comrades, on the Battle-Ground of Manassas July 21, 1910. Neale labels Reconstruction, not the Civil War itself, as "the most horrible of all modern wars." He then asks these aged veterans to "take up the arms that you laid down at Appomattox, that you fight without ceasing, until southerners again enjoy the rights so long denied them. You and your children must not die slaves." Evidently Neale believed it was all right for others and their children to die as slaves. As best we can tell, the old veterans ignored his plea. Item 464. $100. Item 465 is another copy with a presentation inscription from Neale. $250.