A Mix of the Unusual from Peter Masi Books 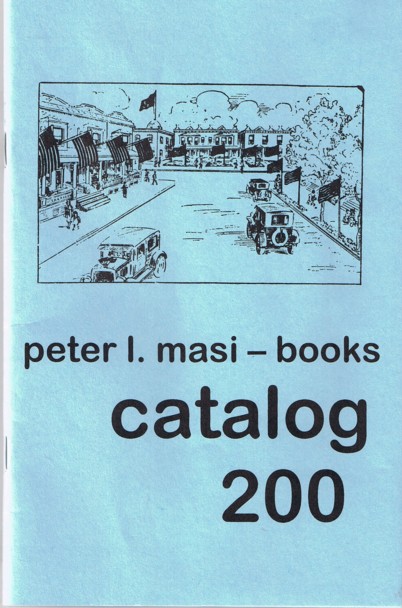 This month we review our first catalogue from Peter L. Masi - Books, though for Masi, this is Catalog 200. It is hard to describe this assembly of over 500 items from this rural, western Massachusetts (Montague) bookseller. Masi describes it as "a very mixed bag, some interesting and amusing selections." I'd be tempted to say you might find anything here, but you won't. There's no Shakespeare or Dickens, no Abraham Lincoln, really very little of the type of material you might expect from a typical rare or antiquarian bookseller. Nor, we are pleased to note, will you find high prices. What you will find is the unexpected, the obscure, the eclectic. For those who collect outside of the ordinary, this is the type of catalogue you will appreciate.

Masi has helped organize the collection by placing all items under a category. Among the categories are early and African Americana, medicine, explosives, linguistics, architecture, women, gambling, music, dictionaries, cooking, education, broadsides, paper and printing, manuscripts, onomastics (the study of names), bodybuilding, textiles, travel, engineering... the list goes on. Here is one more: dialect. Masi is something of a specialist in this material, and offers many related titles. If you want to know how Denver firefighters or eastern bituminous coal miners speak (presumably different from eastern anthracite coal miners), Masi has a book for you. Here are a few of them.

Item 10 is a reminder of one of the less pleasant aspects of an earlier time: A.B. Stewart's National Travelers Guide, a fifth edition published in 1940. This is not a regular travel guide, but one intended primarily for African-Americans. At the time, many hotels and restaurants, particularly in the South, would not accommodate black people, so a standard AAA guide wouldn't have been much help. This guide was designed to help black travelers find places where they could stay or visit and be welcome. Priced at $250.

What did children need to know in 1831? Here's the answer: The First Catechism for Children, containing Common Things, Necessary to Be Known at an Early Age. By the Rev. David Blair. Blair was actually a pseudonym for Sir Richard Phillips, and this was an updated, American version of an earlier British work. Some things are still important, such as 'what is America' and 'who is the president,' though perhaps knowing the date on which Adams and Jefferson died is no longer essential (it was July 4, 1826). Children needed to know what is bread, cheese and sugar (today's children know all too much about sugar), but did they really need to know about beer and wine? And then there is the all-important question: 'How far is it to Philadelphia?' That depends on where you are, though W.C. Fields undoubtedly would have said not far enough. Item 249. $35.

Item 399 is an unidentified (circa 1850?) broadside tale of murder most foul. Actually, this poem had been around since the previous century, the story evidently being appealing in its own perverse way. The title is Captain James, who was hung and gibbeted, in England, for starving to death his Cabin Boy. As the story goes, for some trifling offense, the Captain lashes his cabin boy to the mast, where he is left for many days until succumbing to starvation. Along the way, when the boy asks for water, the Captain gives him urine; when he begs for food, he is offered excrement. When the boy refuses, the Captain beats him. When others on board broach the subject, the Captain threatens them with death if they intervene. On returning home, James believes his money will save him, but the boy's mother refuses it, and pursues justice until the evil Captain meets his fate. This tale should not be taken as fact, but as light entertainment. $125.