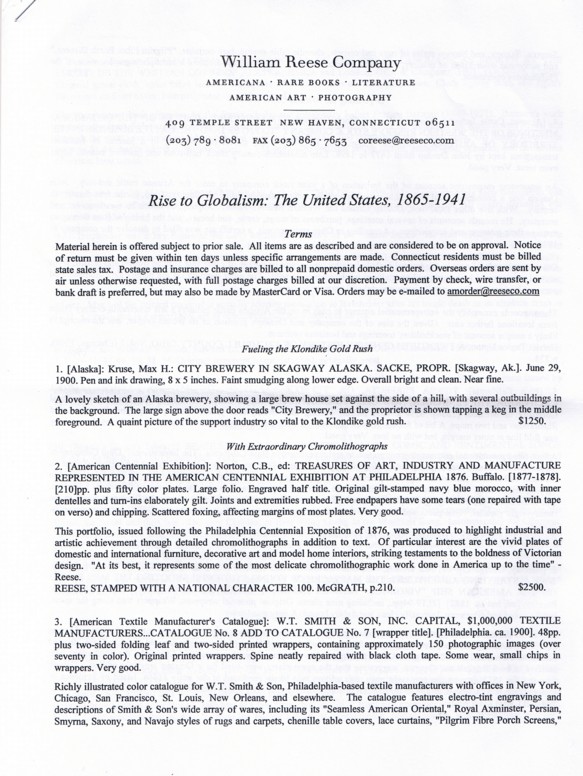 Rise to Globalism from the William Reese Company.

The William Reese Company has issued a catalogue of American items from a period, though long, not often the subject of catalogues we see. The Revolution, antebellum period, and Civil War are frequent features, and the Second World War and all that went with it are the focus of many collections. This catalogue covers the period in between: Rise to Globalism: The United States, 1865-1941. It was the period when America rose from a second tier power to the strongest nation on Earth. Here are a few of the steps along the way, as presented by Reese.

This was the period in which the great American West was tamed and settled. Of course, America's Indians saw this transformation from a different perspective. It is of great irony that, in this period when the natives were routed from their historic lands, the best-remembered American military leader is the one who was soundly defeated. That, naturally, would be George Armstrong Custer, of Custer's Last Stand. Indian victories were few, but this was a thorough whipping. Item 32 is a photographic portrait of Custer, in military uniform, circa 1872. Priced at $900.

Item 19 is a wonderful catalogue unintentionally celebrating the end of an era. It is #22 from The Elkhart Carriage and Harness Manufacturing Co. The date was 1885, and carriages were at their zenith, carriage makers having no idea what was lurking just around the corner. This catalogue is filled with lithographs of their carriages, harnesses and related products, and contains a tipped-in leaf giving the names of important local people who had purchased an Elkhart carriage. When the automobile turned up a few years later, Elkhart was one of the few carriage makers that was able to make the transition. Their large manufacturing facilities were ideal to build first motor driven carriages, and by 1910, true automobiles. The Pratt-Elkhart was a very desirable car, but by 1915, its high price was out of step, so the renamed Elkhart Carriage and Motor Car Co. produced the more budget-minded Elcar. The Elcar also did fine until the Depression, which destroyed so many businesses. The company went bankrupt in 1931 and ceased all production in 1933. $1,000.

The availability of cheap gas that made development of a large auto industry in the U.S. possible probably never would have happened if John D. Rockefeller had been able to maintain his monopoly in the oil business. President Theodore Roosevelt's trust-busting tore down the giant monopolies that strangled competition. Item 62 is a printing of the first court case to begin dismantling the large trusts: Northern Securities v. The United States. Bound with it is Attorney General Philander Knox's argument before the Supreme Court. It was bound by the Attorney General, likely as a gift to friends. Northern Securities was a trust formed by railroad magnates J. Pierpont Morgan and James J Hill. The two had sought to dominate transportation from the Northwest to Chicago. In this landmark decision, the Court upheld the Sherman Antitrust Act, with the government prevailing in a 5-4 court decision. $450.

The end of the Civil War and the beginning of the era covered by this catalogue should have ushered in a positive time for race relations, slavery having just been abolished. Unfortunately, it was nothing of the sort, as America's black citizens continued to suffer all sorts of depredations. The treatment undoubtedly led to terrible damage to the self-esteem of African Americans, so on occasion a book would be published demonstrating the accomplishments of blacks despite the odds. One such book was published by Miles V. Lynk in 1899: The Black Troopers, or the Daring Heroism of the Negro Soldiers in the Spanish-American War. Lynk was a black physician stirring pride in other African-Americans by recounting the heroic actions at San Juan Hill of the black troopers. Were it not for the troopers' help, at a cost of heavy casualties, it is unlikely Roosevelt's charge could have succeeded. Item 71. $1,500.