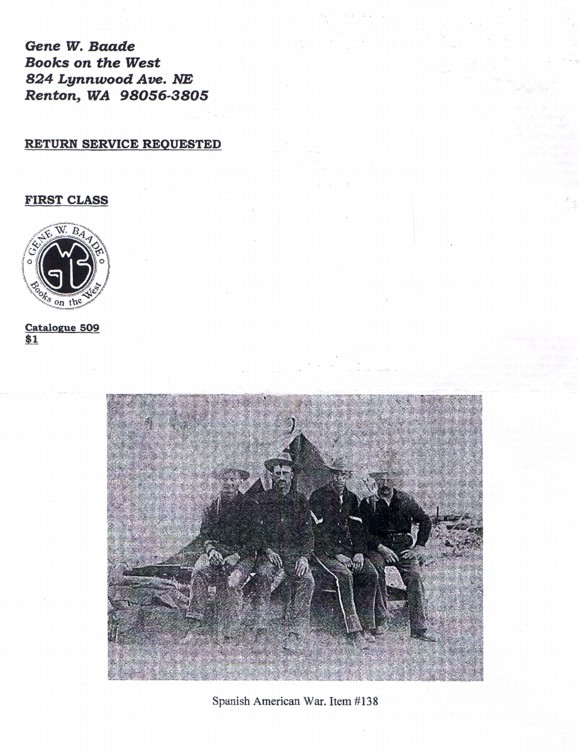 The prices are low in Gene W. Baade's latest catalogue.

Gene W. Baade Books on the West has now issued Catalogue 509. This includes 190 items from stock, most of which, he notes, have been reduced in price. This is a catalogue dominated by inexpensive western books, one of the very few I ever see with items priced as low as under $10. It is a great place for beginning a collection, finding interesting though perhaps forgotten books to read, as well as finding some that belong in already well-developed collections. Here are some of the 190 items described.

John Ledyard was an American adventurer, whose travels included accompanying Cook on his final voyage. His was the only first-hand account written by an American, and he was the first American to write about Hawaii as well. Later trips of Ledyard included overland across most of Russia, and an abortive journey in Africa, where he died in 1789. His account of the Cook voyage is one of the rarest and most important travel books of Americana, a copy recently selling at auction for over $50,000. If that's too rich for you, you can learn about Ledyard from Helen Augur's more reasonably priced 1946 book, Passage to Glory. John Ledyard's America. Item 7. $10.

George Wharton James was a popular and prolific writer about the American Southwest at the turn of the century. A native of England and one-time Methodist minister, he was obviously charmed by this rugged land and its inhabitants. Item 82 is a copy of his 1908 book, What the White Race May Learn from the Indian. This copy is inscribed by James, who appreciated the culture of America's natives far more than most people of his era. $175.

Susan E. Wallace did not share James' respect for the American Indian. Item 177 is a copy of her 1888 book, The Land of the Pueblos. Writes Wallace, attempting to demonstrate the Indian's ignorance, but instead displaying her own, "There is no history to the red race, there is scarcely an individual in it. A few instincts on legs and holding a tomahawk; - there is the Indian of all time." $50.

Peace would finally be achieved between the red and white man in 1936, an event celebrated in song by Francis Wright (lyrics) and De Soto Richardson (music). The song is Chief Okanogan, and this piece was "Personated by Chief Kiutus Tecumseh National Tenor Singer." As the lyrics note, "Less and less we hear the coyotes sound their lonely yip, yip, yip. / Since there's peace among the natives, no more arrows zip, zip, zip." Item 189. $35.

Item 143 is a reward card, dated Nov. 11, 1899, from Titusville, Pennsylvania. The wanted man was Frank Woodward, alias Frederick Adams. The crime was most foul. Adams and two accomplices blew open the safe at the local railroad station, and then proceeded to the home of Bertha Bloom. Meanwhile, the Chief of Police had been notified of the burglary at the railway station, and he and another officer followed the track to the Bloom house. While the thieves dawdled at Bloom's house, convinced she had more hidden money and jewelry then she was letting on, the police caught up with them. A shootout occurred, and the Chief of Police and one of the burglars were killed, the other officer injured, another of the burglars was captured shortly thereafter, and Woodward escaped. This 4 1/4 x 5 3/4 card includes two photographs of Woodward, likely from an earlier imprisonment, plus an offer of a $2,500 reward. That was a lot of money in 1899. From here, the track turns cold to our investigation. We do not know whether Woodward was ever captured or the reward given. Perhaps you can still collect if you can locate his bones. The other surviving thief was convicted, and the court's opinion in his unsuccessful appeal in 1901 implies that Woodward was still free two years later. $150.