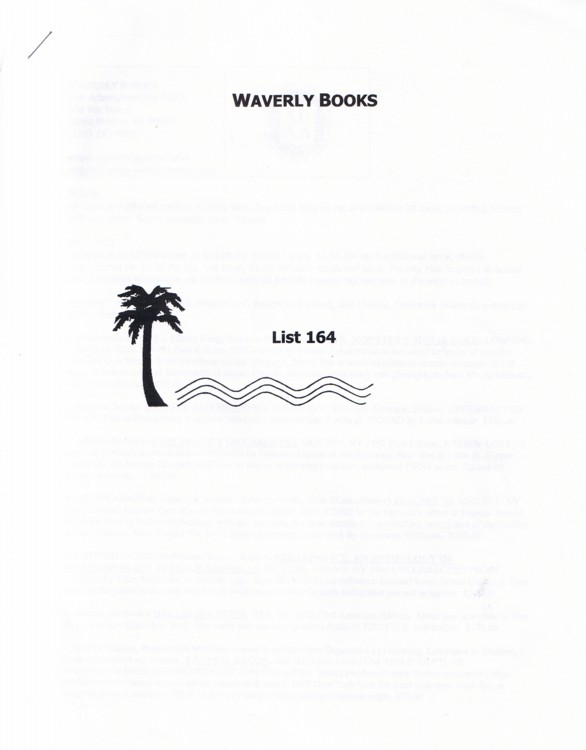 Waverly Books has issued a new catalogue, List 164. Offered are books in their usual fields of literature and film-related, with enough surprises to make any collector want to take a look. So, that is exactly what we will do.

Item 19 is a devilish book if ever there was one: The Exorcist, by William Blatty. This is the ultimate story of possession, a tale of horror that filled theaters with people wishing to get scared to Hell in the 1970s. Offered is a first edition from 1971, published two years before the release of the noted film. Priced at $225.

Here is a man whose personal life might be somewhat horrific, but his films were always funny. Item 49 is a copy of Woody Allen's Don't Drink The Water. This is a 1967 first edition of Allen's first book. At the time, he had just directed his first films, was now writing plays, and had established his reputation as a stand-up comedian. In other words, he was already well-known and popular, but his writing talents were just being discovered. Allen has signed a tipped-in bookplate which comes with this copy. $500.

Item 97 is a typed, signed letter from Harry Belafonte, dated November 9, 1959. Belafonte was at the top of his career by then, though the letter's recipient was still working her way up. The recipient was playwright Alice Childress, the first black woman to have a play professionally produced. However, her career would not peak until a couple of decades later, so Belafonte was able to politely turn down the script she offered him. $250.

Item 27 is a 1949 first edition of W.R. Burnett's The Asphalt Jungle. This is a story of a jewelry heist in the big city, or asphalt jungle. The following year, it was made into a successful movie, produced by John Huston and starring Sterling Hayden. Even more notably, it introduced the obscure actress Marilyn Monroe to wider audiences, setting her off on one of the most legendary film careers ever known. $300.

John Dunning is a familiar name to booksellers as well as those who enjoy detective stories. That's because Dunning is a bookseller who writes detective fiction. His lead character, Cliff Janeway, is also a bookseller, albeit a fictional one, who unravels mysteries from his (and Dunning's) hometown of Denver. What may be less known about Dunning is that he is a big fan of old-time radio. He grew up at the end of the era when radio was still the major source of home entertainment, with serials, situation comedies, music and variety reaching people without the benefit of images, other than those they supplied from their own imaginations. Dunning is an expert in the field, and item 156 is a signed first edition of his 1976 book, Tune in Yesterday. The Ultimate Encyclopedia of Old-Time Radio. 1925-1976. $150.

In the year Dunning was born, 1942, his beloved radio's successor was already being designed. Item 125 is Television. Today and Tomorrow, by Lee De Forest. De Forest was one of the pioneers of radio, both as an inventor in the field of electrical amplification and as an early broadcaster. However, by 1942, he was on to the transmission of images as well, which would begin in all earnest later that decade. This copy is inscribed by De Forest to his secretary. Item 125. $500.