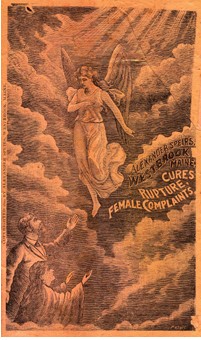 Your cure for ruptures and other ailments.


Item 18 is a manuscript notebook of Nathan C. Bradley of Otsego County, New York. He records notes from 18 sermons he heard from preachers of various denominations from 1833-35. This was an interesting time, the Second Great Awakening, and upstate New York was the home of many burgeoning movements, including the Millerites and the Mormons. The greatest action was taking place somewhat to the west of Otsego County, but this very rural area would have been fertile ground for those looking for followers of their beliefs. $45.

Here is what was definitely a limited edition, and we will guess more charming than many of the very expensive limited editions priced in the thousands of dollars you can find. Item 101 is Our Dogs: Written, Printed and Bound by a L8 Class. This group of authors and illustrators were part of an 8th grade class at Oakland Junior High School in Oakland, California, in 1939. One poem begins: "My dog is a good little dog, Although he eats like a hog. He ate and ate, Until he had a stomach ache..." Not bad. More appealing, to me anyway, than some of the more "sophisticated" poetry that is about as comprehensible as the writings of J.W. Shiveley. This is a special copy as it has been autographed by many of the authors, including a lengthy inscription from one. One would think that several of these authors are still with us, and I hope one reads this notice and orders this piece of personal remembrances. It's cheap. $45.

Item 123 is Logan Reavis' 1869 recommendation: A Pamphlet for the People: Containing Facts and Arguments in Favor of the Removal of the National Capital to the Mississippi Valley. The amount of support Reavis found for his idea of moving the capital to St. Louis was such that Scott notes, "...one is almost surprised to find today that the capital remains on the banks of the Potomac." If this had happened, instead of politicians constantly blaming Washington for our ills, they would be blaming poor St. Louis. Just as well for the good folks of Missouri this never happened. $125.

For those looking for a cure for rupture, what could be more appropriate than How to Cure Rupture? Alexander Speirs provides the answer to this ailment and a few others, such as female complaints and diseases of men. There are tresses for those suffering ruptures, along with the medication "Rupterine." For men who have "lost their energy and vigor," there's Dr. Sandie's Electric Belt. This is a case of the cure sounding worse than the disease. This pamphlet is fronted by a most impressive image of an angel delivering these wondrous cures to sufferers greeting her with outstretched arms (click the thumbnail image above left to view). From 1899. Item 142. $50.