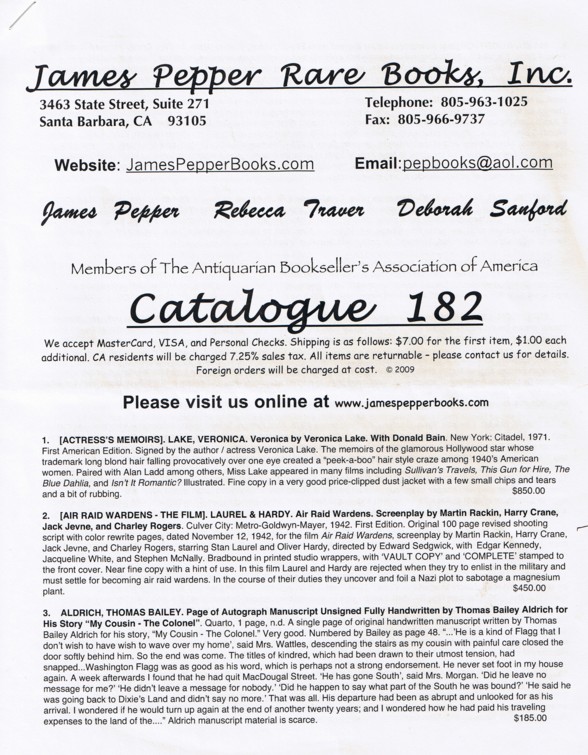 We have received the latest collections of books and related items for sale from James Pepper Rare Books: Catalogue 82. Pepper's catalogues feature literature, items related to film, and mysteries, along with a few items outside of their primary specialties. Many contain signatures or inscriptions. New catalogues arrive on a regular basis, but are still filled with items we have not seen before. Here are some samples from this latest group of 150 works.

Item 117 combines literature with film. It is an inscribed copy of Mario Puzo's The Godfather to longtime actress Virginia Grey. Grey first appeared in films when she was 10 years old, a silent version of Uncle Tom's Cabin. Between then and her retirement, she appeared in over 100 talkies, but few were classics or long-remembered. Her bigger roles came in forgettable films, and her roles in better films were minor. She was also a frequent performer in television series, though never as a regular. Perhaps the closest she came to the top of the film business was her romantic involvement with the very major star Clark Gable in the 1940s. However, it seems she was more involved with him than he with her. Gable married another; the disappointed Miss Grey never married. While neither Gable nor the public fully appreciated Miss Grey, it appears that the writer Puzo did. He has penned into this 1969 book, which would spawn one of the most successful movies and series of movies ever, "For Virginia, who I fell in love with in at least 10 movies. I hope you like the book as well as I liked your movies." Grey retired from the movies in 1970, two years before Puzo's book was converted to film. In addition to Puzo's inscription, the book contains Grey's signature. Priced at $1,500.

Here is another book inscribed by a famous man, about as personable as the Godfather, to an actor. Item 106 is a copy of the 1980 first edition of The Real War, by Richard Nixon. The recipient was actor Randolph Scott, who also appeared in more than 100 films, but generally had better roles. While he played in many genres of film, he was best known for his westerns, and as his career evolved, such roles dominated his appearances. Evidently, the former President liked westerns, as he was a great fan of Scott, and the two were friends. Nixon has inscribed this book to Scott on his bookplate. $2,500.

One 1970s president deserves another. Here is a book from Nixon's successor, Gerald Ford, and John R. Styles: Portrait of the Assassin. This book was published in 1965, in the days when no one expected Ford would rise above being a congressman from Michigan. Ford was a member of the Warren Commission, which was called on to investigate the assassination of President Kennedy. Part of his responsibilities for the commission was preparing this biography of Lee Harvey Oswald, whom Ford believed to be the lone assassin. This book is signed on a label affixed to the front pastedown, and is obviously a later signature as it notes he was the 38th president. Item 80. $950.

Item 41 is the first appearance of William Faulkner in print. It's not what you might expect. Rather than a story about life in the South, or anywhere else for that matter, it is a drawing. Of course, Faulkner would become known as a writer, not an artist, but his contribution to the Ole Miss Yearbook 1916 - 1917 was to put his pen to an image rather than words. $7,500.

Item 124 is a classic of mystery and terror: Donovan's Brain, by Curt Siodmak. It is the story of a dying man whose brain is preserved in a jar, or some such container, from which he increasingly and terrifyingly gains control over his keeper. Originally published in 1942, this is a 1971 British edition, which Siodmak has inscribed to fellow writer John Ball. Ball is best known for his book, later converted to a film and television series, In the Heat of the Night. $500.