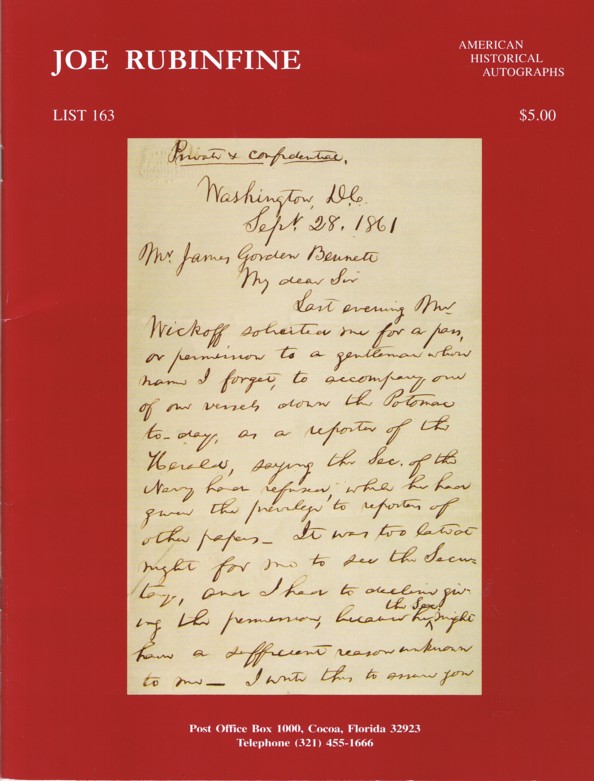 Joe Rubinfine of Cocoa, Florida, has published his List 163 of American Historical Autographs. Most of these autographs come on letters or other written documents, and most are from important leaders, either political or military. Collectors of presidential documents will find no shortage of interesting material here. However, there are also a few items from outside of these parameters, such as letters home from Revolutionary and Civil War soldiers, or letters from scientists and aviation pioneers, even poets. Here are a few of these firsthand looks at America from the 17th to the 19th century.

Item 18 is a remarkable collection of autographs from Connecticut at the dawn of the Revolution. The Connecticut Assembly was called together on July 1, 1775, to respond to an urgent request from her sister colony of Massachusetts. The Battle of Bunker Hill had taken place just two weeks prior, and the Massachusetts patriots had been driven from their ground, though at a very high cost to the British army. The British actions only served to make other colonists angry, and the Connecticut Assembly voted to send two regiments along with financial aid and ammunition to their neighbor. At the end of the day, the assemblymen had to take care of a pecuniary matter, payment for their attendance. Each attendee received around two pounds, the amounts varying, most likely because of the distance traveled. This document is a receipt of their payments, signed by 155 members of the Assembly, as Rubinfine notes, a "Who's Who" of Connecticut political leaders in 1775. Priced at $2,000.

Item 4 is the appointment of a foreign envoy, but it was of great importance to the newly self-declared independent nation. On January 30, 1778, the French government issued this official appointment of Conrad Alexandre Gerard as envoy to the United States. It was the first such appointment of an envoy to the U.S. by any nation and displayed recognition of its independence by a foreign power. Shortly thereafter, Gerard would sign treaties with the United States, which were signed by Benjamin Franklin and others representing America. This appointment is signed by Gravier de Vergennes, the French foreign minister, who was happy to stick it to the British, and by King Louis XVI's secretary on his behalf. $50,000.

The early French treaty with America included a secret provision, kept hidden so as not to tell the British. It provided for Spain, France's ally, to align itself with France and America through this treaty. When John Jay joined the Continental Congress and was quickly chosen as its leader in early 1778, the Continental Congress' Secretary, Charles Thomson, wrote out a copy of the secret provision to be given to Jay. Item 5 is this copy. $6,500.

Benjamin Rush was one of America's "Founding Fathers," a physician, educator, and writer, as well as a devoutly religious man and great humanitarian. He was a signer of the Declaration of Independence, a member of the Continental Congress, and was the man who years later brought about the reconciliation between the nation's second and third presidents, John Adams and Thomas Jefferson. Rush's strong principles led him to oppose slavery and capital punishment. In this letter to an unidentified recipient, dated July 9, 1803, Rush expresses his happiness that several states have abolished capital punishment. Writes Rush, "May the time come soon, when man everywhere shall cease not only to be the 'greatest foe of man!' but feel that the most degraded & the most guilty individual of his Species, is an unfortunate brother!" He goes on to say, citing the advice of an "Old Clergyman," "Continue my dear Sir your labors for the benefit of your fellow citizens. 'Do all the good you can, - expect to be persecuted for doing good, and learn to rejoice in persecution'..." Still good advice. Item 11. $7,500.