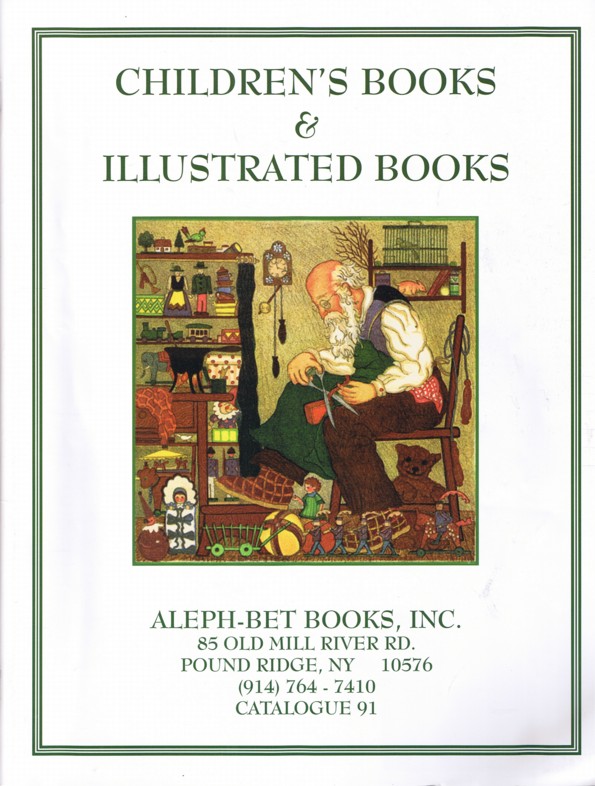 Your childhood is alive and well at Aleph-Bet Books.

Aleph-Bet Books has released their Catalogue 91 of Children's Books and Illustrated Books. Actually, most are illustrated children's books, thereby qualifying under both headings. These books are great fun, though some of the ethnic stereotypes of another age can make us quite uncomfortable. Otherwise, these trips back to our youth, and that of our grandparents and great-grandparents as well, can't help but make you feel good. So we will now take our trip back in time.

Item 139 is one of 100 copies of the 1876 first edition of Lewis Carroll's The Hunting of the Snark that was specially bound for the author. Tipped in is a copy, also from 1876, of his rare booklet, An Easter Greeting to Every Child Who Loves Alice. This was privately printed by Carroll, actual name Lutwidge Dodgson, for his friends, this being the rare first issue. The book carries an inscription "from the author," dated March 29, 1876. It is inscribed to Beatrix Tolhurst. We cannot find out much about Miss Tolhurst other than Dodgson requested permission of her mother to take her picture in 1869 and inscribed at least one other book to her (in 1871), so we would guess she qualifies as one of Dodgson's young friends. Priced at $11,500.

Here is another signed item: Love Letters of Mark Twain, published in 1949. Twain has signed the item both as Twain and with his real name, Samuel Clemens. This is an edition limited to 155 copies. Okay. I wasn't born yesterday. I don't recall when Twain died, but it was certainly well before 1949. He would have been 115 years old then. Twain was not signing anything, at least on this earth, in that year. Well, it turns out this isn't a forgery, or ghostly appearance, after all. Publisher Harper & Brothers evidently had these signed pages in their possession for many years, and decided to use them in this special limited edition. Item 558. $5,000.

Here is another signature from yet another humorous author, and one who was definitely alive at the time he wrote it. Item 77 is a letter dated July 15, 1917, from L. Frank Baum to his illustrator John R. Neill. In the typed, signed letter, on Baum's letterhead depicting many of his books, the author expresses his appreciation for Neill's drawings for The Lost Princess of Oz. This was the eleventh of his Oz books. Baum did pick up that Neill had put two peaches on a tree that was only supposed to have one, but otherwise appreciates his faithfulness to the text. Baum then expresses regrets that they haven't seen each other in a long time, and notes, "I remember our former foregatherings with real pleasure and think we would harmonize if we were jailed together in the same cell." $27,500.

We all have had books by Dr. Seuss, but how many out there have a book by Mrs. Seuss? Yes, there really was such a person, and she too was an author. Her name was Helen Palmer (technically Helen Palmer Geisel, but she left off the good doctor's real last name on her books). Item 94 is her book I Was Kissed by a Seal at the Zoo, published in 1962. Rather than using fantastic drawings as did her husband, Mrs. Palmer-Seuss illustrated her book with photographs. Item 94. $125.