Captain Bligh and the Mutiny on the Bounty from Hordern House 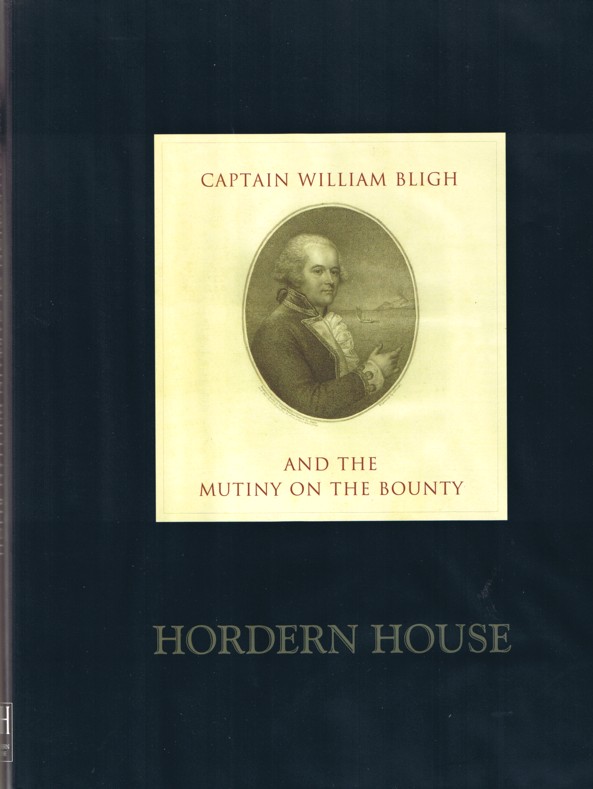 A collection on Captain Bligh and the Mutiny on the Bounty.

Hordern House of Australia has issued a new catalogue, though this spectacular presentation has more the appearance of a fine press book than a bookseller's catalogue. Offered are selections from the collection of Robert and Mary Anne Parks of Michigan. Last year, Hordern House offered books from the Parks' collection of the great explorer James Cook. This latest collection is an homage to one of the most controversial men to sail the seas. Some see him as one of the bravest, most skillful navigators ever to captain a ship. Others see him as a tyrant deserving of the mutiny that made his reputation. The title of this catalogue/book is Captain William Bligh and the Mutiny on the Bounty.

Bligh's first significant role at sea came when he served as Master on the aforementioned Captain Cook's last voyage. From there, he floundered around a bit before being given command of the Bounty in 1787. Its mission was to gather breadfruit trees in Tahiti and transport them to the Caribbean, where it was hoped they would provide a bountiful and inexpensive food source for the slaves. However, a late and difficult start forced him to turn back from an attempt around the horn of South America, and take the long route east. It was an inauspicious start. Bligh was a demanding and verbally unpleasant personality, which angered some of his men, though it appears he was less physically abusive than the typical captain of his day. Nevertheless, after picking up the trees and heading to the Caribbean, a group of his men, led by Fletcher Christian, mutinied. They may have preferred the relaxing and pleasant life of Tahiti to the hardships of following Captain Bligh and living at sea. The mutineers seized control of the ship, depositing Bligh and 18 loyal seamen on a 23-foot boat for what must have appeared almost certain death. Instead, Bligh navigated one of the most remarkable voyages in seafaring history, 3,600 miles in the small boat to safety on the Dutch island of Timor. Eventually he made it back home, and a group of the mutineers was captured in Tahiti and returned to England for trial, while the remainder, including Christian, moved on to live out their days (for most, not too many) on Pitcairn Island.

Bligh was court-martialed on return, but acquitted. He was then given command of another ship, and this time successfully transported the breadfruit to the Caribbean. Ironically, the slaves refused to eat the stuff, so the mission failed in its purpose. Bligh would command several more vessels, and have a distinguished if not particularly notable career. In 1806, he took to land when appointed Governor of New South Wales, and in another irony, local officials mutinied. Once again, Bligh was exonerated, but with his position lost, he remained in England. He died in 1817. Here are a few of the 133 items pertaining to Bligh offered by Hordern House.

Item 7 is the first edition of Bligh's account of his crew's mutiny and his unlikely escape: A Narrative of the Mutiny, on board His Majesty's Ship Bounty... Published in 1790, it retells Bligh's harrowing tale, naturally, from the point of view of the Captain. Priced at AU $24,500 (Australian dollars, or approximately $18,008 in U.S. dollars). Item 12 is the more detailed account of his journey that Bligh published two years later in 1792: A Voyage to the South Sea, undertaken by Command of His Majesty, for the purpose of conveying Bread-fruit Tree to the West Indies, in His Majesty's Ship the Bounty... AU $25,500 (US $18,730).