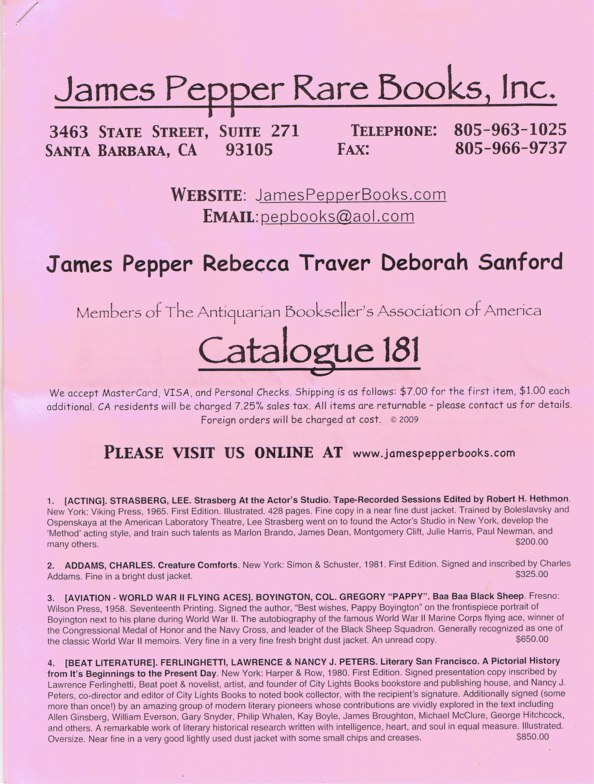 James Pepper Rare Books has issued their Catalogue 181. It includes much in the way of material related to stage and screen, literature, and detective fiction, as we have come to expect, along with some works with an artistic or photographic connection. There is even a tuxedo worn in the film Sunset Boulevard if you want to look like a star, but the remainder of what is offered is printed or written material. These are a few of the items being offered this time around.

Item 61 is an obscure work of F. Scott Fitzgerald, obscure to me, anyway. It is a first edition of his 1923 book The Vegetable. Fitzgerald had already made a name for himself by this time, but not to the extent he would two years later with the publication of The Great Gatsby. Perhaps the obscurity follows from the play produced from this work, which Pepper describes as "a miserable failure." Fitzgerald would have his successes in the years ahead, though he always thought of himself as more failure than success. This copy of The Vegetable is inscribed by Fitzgerald to Gene Buck, a neighbor and theatrical producer. Priced at $5,500.

You probably couldn't get Ebenezer Scrooge to shell out for this book, but those who have learned from his mistakes might be willing. Item 39 is a copy of the 1844 first American edition of Charles Dickens' classic A Christmas Carol. Laid in is an autograph of Dickens cut from a legal document. $2,500.

Here is an item for Mickey Mouse collectors. No, I don't mean rank amateurs by saying "Mickey Mouse" collectors. I mean it literally. Item 42 is The Adventures of Mickey Mouse. Book 1. Story and Illustrations by the Staff of Walt Disney Studio. Published in 1931, this is a first edition of the first hardbound Mickey Mouse book. Evidently, the rodent was moving up from the cartoon world to that of serious literature at the time. This copy is in near fine condition, or in mouseketeer speak, squeaky clean. $3,500.

Item 164 is a piece of aviation ephemera signed by one of the field's greatest pioneers, and the most noted humorist of his time, who later tragically died in a plane crash. It is the 1926 aviation certificate of one F. Gerald Phillips, and it is signed by Orville Wright and Will Rogers. $3,000.

Early photographer C.S. Fly had an opportunity to photograph some western heroes and villains from his studio in Tombstone, Arizona, site of the famous gunfight at O.K. Corral. One of his subjects was the great Apache warrior and leader Geronimo. Item 70 is a photograph taken by Fly of Geronimo, his son, and two warriors. It was taken sometime before Geronimo surrendered to General Crook, to be held in custody for the remainder of his life. $2,500.

Here is a book from the original taxi driver: Looking...Seeing - poems and song lyrics by Harry Chapin drawings by Rob White. It includes poems Chapin had written along with lyrics to some of the songs that made him famous. This 1975 first edition is inscribed by the poet/musician. Chapin died in 1981 at the age of 38 in an auto accident. Item 24. $85.

James Pepper Rare Books may be reached at 805-963-1025 or pepbooks@aol.com. Their website is found at www.JamesPepperBooks.com.