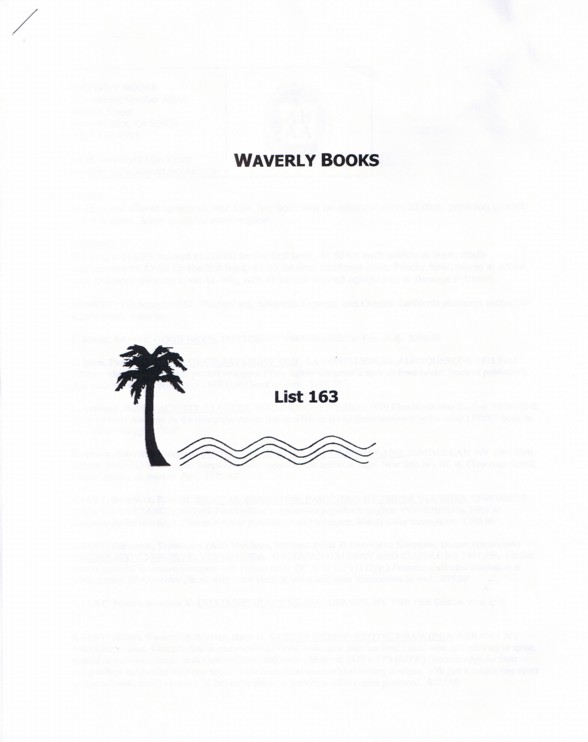 From Waverly Books of Santa Monica we have received their latest collection, List 163. Waverly's catalogues reflect their Southern California location. They carry much in the way of literature and poetry, but also many items that are film related, including books that were made into films, scripts, and various film-related ephemeral items. Additionally, other arts, such as music and photography, find a recurring place in Waverly catalogues. Here are some samples from their latest offerings.

Item 60 includes the first appearance of one of the most noted of mystery novels, Dashiell Hammett's The Thin Man. The book's protagonists, private detectives Nick and Nora Charles, would become well-known characters through a series of Thin Man movies and a television series starring Peter Lawford. However, there was only this one novel. Its first appearance was in this anthology, Six Redbook Novels. Published in 1933, it contains six mystery novels, including Agatha Christie's The Boomerang Clue. The compilation was put together for subscribers of Redbook Magazine. The novel was published separately the following year, to be quickly followed by the first of the series of Thin Man movies. Priced at $300.

At the height of the Cold War, in 1959, a famous American visited Moscow, shaking up the Communist bosses. No, we are not talking about Richard Nixon's famous trip or his "Kitchen Debate" with Khrushchev. This was a visit by that precocious American child Eloise. She was always more than any commissar could handle. Item 25 is a first edition of Kay Thompson's Eloise in Moscow, with illustrations, naturally, by Hilary Knight. $150.

Item 106 is a book of photography by Ansel Adams. Adams was America's preeminent western photographer, specializing in black and white prints, and with his favorite subject being Yosemite. So, what could be better than a copy of his 1979 work Yosemite and the Range of Light? Here is what could be even better - a signed copy. $1,000.

Here is another photography book, but this photographer is better known for his politics than his prints. Item 109 is Barry Goldwater and the Southwest, published in 1976. This is copy #21 of 100 in a leather binding, and carries an inscription from the 1964 Republican presidential candidate along with those of the editors and staff. What's more, the book contains a forward from the aforementioned Ansel Adams. We don't know whether Adams liked Goldwater's politics, but he evidently liked his photographs. $450.

Now for one more book of photographs, and this one is also most impressive: Ed Ruscha: Then & Now, Hollywood Boulevard 1973-2004. This is a 2005 first edition of Ruscha's photographs. Ruscha had photographed Hollywood Boulevard in 1973, and went back to retake the same locations in 2004. The new pictures are juxtaposed with the older ones to show the progress, or whatever you might call the changes that have taken place on this famous street. Item 115. $175.

Here is an unusual item: The Marx Brothers. It is not a book, nor is it some sort of video of their classic work. Rather, it is a boxed set of four LP records. It includes four hours of humor taken from their radio shows. Now that vinyl is making a comeback, someone may once again have a record player with which to relive these old memories. Item 93. $200.

Item 97 is the book that comes up year after year at the top of BookFinder's Top 10 of the most sought after old books: Sex, by Madonna. Published in 1992, this collection of erotic-come-weird photographs includes the CD of the pop icon's music. This book is sought after because it is hard to find. Waverly has found you a copy. $300.