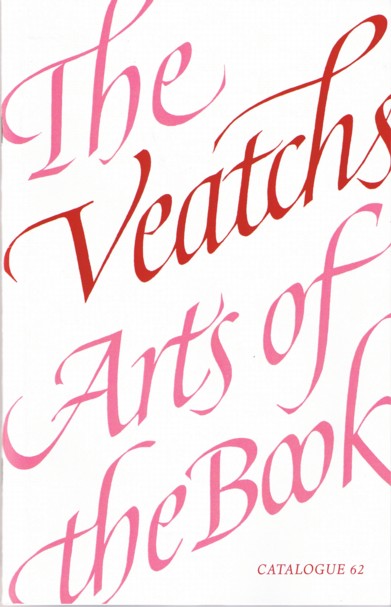 Catalogue 62 from the Veatchs Arts of the Book.

The Veatchs Arts of the Book has issued their Catalogue 62: Recent Acquisitions. While "recent acquisitions" could mean anything, The Veatchs catalogues are targeted on items related to the book arts. You will find books that feature outstanding illustrations, colors, and typefaces, fine bindings, high quality papers, along with works whose topics are related to printing and producing books.

Item 4 is a major work in an obscure printing field - nature printing. This was a process where natural items, such as flowers, were pressed between metallic plates to create an image from nature, which could be colored and printed. The opportunity for exact likeness is obvious, but the process was difficult and expensive. While there had been early attempts at direct transfer, the process was at least somewhat perfected in 1853 by Austrian printer Alois Auer. His explanation of the process was published in 1854: Die Entdeckung Des Naturselbstdruckes Oder Die Erfindungen... This translates to "The Discovery of the Natural Printing Process." Among the items displayed through natural printing in this book are flowering plants, fossil fish, a bat wing, snakeskin, leaves, ferns, laces, wood grains, etc. This process reached its zenith a few years later with the printings of ferns by Henry Bradbury. However, Bradbury, who studied Auer's process, but then designed his own version, became involved in a controversy with Auer over who invented it, and committed suicide a few years later. Evidently, Auer took the dispute a little better. Priced at $5,500.

Another person to use a form of nature printing was Sherman Foote Denton. Denton was a naturalist, who created a superior method of mounting and preserving fish specimens, such that his work was found in many great museums. He also was handy at mounting butterflies, and used a direct contact method to print the images of butterflies. His work can be seen in As Nature Shows Them: Moths and Butterflies of the United States East of the Rocky Mountains. Item 24. $4,500.

Item 64 includes samples of the three issues of James Longacre and James Herring's The National Portrait Gallery of Distinguished Americans. This extensive work of biographies of notable men in early America was published in four volumes from 1834-1839. It is filled with detailed information on many people you know, and other distinguished citizens now mostly forgotten. This notable work was published in three versions: Royal Quarto, Imperial Octavo, and regular octavo. Offered is the complete Royal Quarto set, along with three volumes of the Imperial Octavo and one of the regular octavo for comparison. $3,800.

Here is an interesting book, published in 1908: Modern Power Generators. Steam, Electric, and Internal-Combustion. This book is filled with information about the latest engines of the day, including those used in that new device, the automobile. Author James Weir French provides many illustrations, including composite sectional models that allowed readers to look inside these engines. At the time, it wasn't easy to find repair shops, particularly if your car or other device broke down somewhere in the country, so people needed to understand these engines so they could make the necessary repairs by themselves. Item 39. $400.

Now here's your chance to learn a new vocabulary word: Poikilographia, Or Various Specimens of Ornamental Penmanship. The rest of that title defines the meaning of "pokilographia," though I have suspicions about this word. I have not seen it used by anyone other than the author of this 1812 book, Samuel Coate. Nevertheless, Coate provides many examples of decorative alphabets in several languages, including Greek and Hebrew. Item 18. $2,350.

You may reach The Veatchs Arts of the Book at 413-584-1867 or veatchs@veatchs.com. Their website is www.veatchs.com.