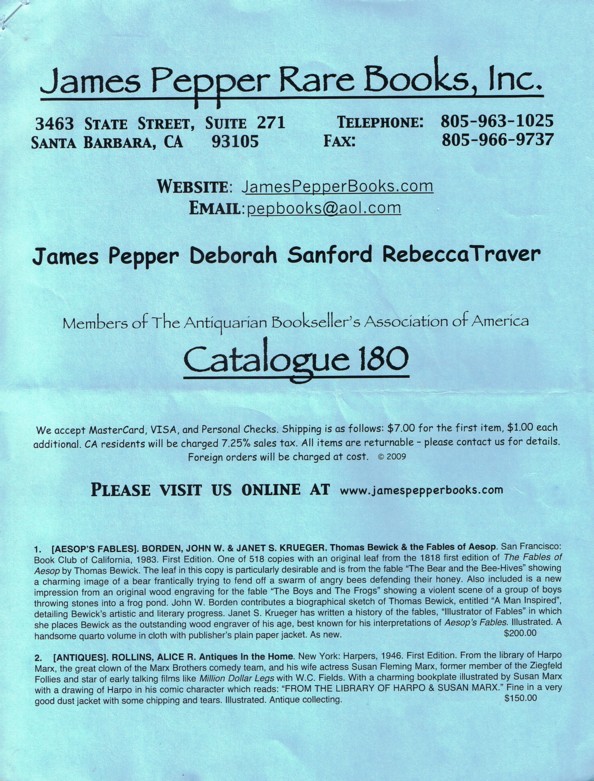 James Pepper Rare Books has issued their Catalogue 180. This is a collection of 150 items, mainly within the categories of literature, film and mystery, along with a few others that don't quite fit any of these classifications. There are a few with presidential connections this time, so we will start with these somewhat unanticipated items.

Item 77 is a first edition, first issue of William Dean Howells' Lives and Speeches of Abraham Lincoln and Hannibal Hamlin. The book was published in 1860, and signed by Howells 54 year later. In the day, books such as these were used to promote a candidate, communications being more limited. There were several about Lincoln, but this was the most successful. Lincoln didn't forget Howells, appointing him Consul to Venice, an honor if not major diplomatic post. Years later, Howells told Mark Twain that he had elected Lincoln. Undoubtedly he helped, and if his contribution was the straw that elected the man, then America owes Howells a debt of gratitude. The book comes with an autograph letter of Howells laid in. Priced at $4,000.

Presidential scandals were not until recently considered appropriate matters for public discussion, but they are nothing new. Item 108 is The President's Daughter. The Love Story of President Harding (1927), along with Honesty or Politics (1932). The former is a later printing, the latter a first edition. The author is Nan Britton, who claimed to have had an affair with Harding before and after his election to the White House, and that he was the father of her daughter. His paternity, or the nature of their relationship, is as yet uncertain. Britton was a teenage daughter of a Harding friend who, for reasons only known to her, had an overwhelming crush on the older man. That wouldn't have mattered much to anyone besides Mrs. Harding were it not for his unlikely elevation to the presidency. Britton's tales might embarrass Bill Clinton, including a tryst in a White House closet. Supposedly, Harding promised to support her daughter, but that was interrupted by his sudden death in 1923. His family certainly wasn't going to honor any such supposed commitment. Britton's claims might have seemed far-fetched, except that Harding had carried on a long affair with another woman not his wife, Carrie Phillips. He had his weaknesses. Ultimately, Harding's administration would go down as one of the most scandal-ridden in American history, though that was because of its corruption, not sex scandals. $1,250.

As long as we're discussing illicit affairs of the famous, item 42 is A Loving Gentleman. The Love Story of William Faulkner and Meta Carpenter, by Meta Carpenter Wilde and Orin Borstin (1976). Carpenter was a secretary working for film director Howard Hawkes when Faulkner was hired by Hawkes to help write film scripts. Faulkner was intrigued to find there in Hollywood someone else from his native Mississippi. He was probably even more intrigued by her being young and attractive. It led to an on-again off-again intimate relationship that Miss Carpenter was kind enough to share with us many years after Faulkner passed on. This copy has been signed by Carpenter and co-author Borstin. $150.

If you are a Faulkner collector, here is some of his most important writing. Not most interesting, just most important to him personally. It is a large collection of documents pertaining to his selling the movie rights to The Sound and the Fury. Included are four signed contracts and numerous other papers. Item 37. $50,000.

Item 78 is a signed first edition of Victor Hugo's poem L'Ane (The Ass, and it's a poem narrated by a DONKEY). Offered is a copy inscribed by Hugo to French statesman Jules Simon. Simon was a moderate republican in a time when France was battling between radical and moderate republicans and a powerful group wishing to restore the monarchy. He served a year as prime minister before being forced out, but his republican views ultimately prevailed. $6,500.

You can reach James Pepper Rare Books at 805-963-1025 or pepbooks@aol.com. Their website is www.JamesPepperBooks.com.