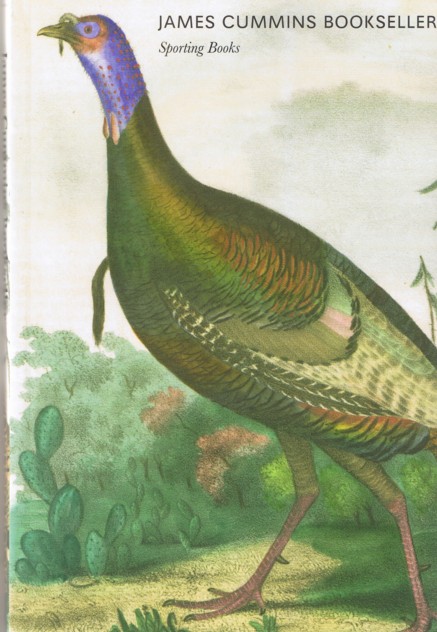 James Cummins Bookseller has issued a new catalogue of Sporting Books. Sporting should be distinguished from sports. These books are about the more traditional pastimes of hunting and fishing. Actually, most are about "angling," fishing with a hook, though it seems most people today use the word "fishing" when they go out with hook and line. Mixed in are a few books that describe other games as played a couple of centuries ago, and some that are more focused on just being outdoors. Finally, there is an extensive selection of books from the Derrydale Press. This press was a fine printer of books primarily in the fields of sport and outdoors. Altogether, there are almost 500 books offered in this catalogue (499 to be exact). Here are a few.

The starting place for all reviews of sporting books is, of course, The Compleat Angler, by Izaac Walton and Charles Cotton. We will not be original, so here it is. Item 352 is the fifth edition of this book from 1676, the last published during Walton's lifetime. This edition was published as a compilation of three works, the others by Charles Cotton and Robert Venables, and bound together under the common title page of The Universal Angler. Made so by Three Books of Fishing. As with each edition of Walton's works, there were changes made from previous editions. Priced at $15,000.

Item 245 is an account of the first angling club in America, An Authentic Historical Memoir of the Schuylkill Fishing Company... Founded in 1732, author William Milnor Jr. later served as the organization's secretary. He was also a member of America's first hunting club, the Gloucester Fox Hunting Club. Milnor also managed to serve a couple of terms in Congress and a year as Mayor of Philadelphia along the way. His account of the fishing club was published in 1830. $1,250.

Zane Grey is remembered as one of the greatest writers of the American West. You expect to see him seated on a horse, but that was not always the case. It's hard to fish on horseback, particularly offshore, and Gray spent a lot of time with a fishing rod. He wrote a series of books about his fishing experiences. Item 123 is Tales of the Angler's Eldorado: New Zealand. This scarce 1926 book includes 100 of his photographs. $2,500. Several other Grey fishing books are also offered in this catalogue.

Item 345 is a remarkable account of hunting on the American frontier: Pioneer Life; or, Thirty Years a Hunter. Being Scenes and Adventures in the Life of Philip Tome, Fifteen Years Interpreter for Cornplanter and Gov. Blacksnake, Chiefs of the Allegheny River. This book was self-published by Tome in 1854, but his adventures took place from 1791-1825. The association with Cornplanter is particularly notable. He was a leader of the Senecas and the Iroquois Federation. Though, as his name suggests, a believer in peace, he served as a war chief during the American Revolution. Despite his wish for neutrality, the Iroquois chose to fight on the side of the British. After the war, he became friendly with the Americans, and signed treaties with them, though in time he would become disillusioned with the treatment of his people. Gov. Blacksnake was another Seneca Chief, nephew of Cornplanter. $3,000.

Item 113 is Willard Glazier's Headwaters of the Mississippi...and a full account of the discovery and location of the true source in a lake beyond Itasca, published in 1893. Glazier led an exploration to find a source beyond Lake Itasca for the Mississippi River. A few small tributaries lead into that lake, and Glazier discovered a lake that flowed to Itasca, Elk Lake, which he modestly renamed "Glazier Lake." It has since been returned to its original name, and most people still think of Itasca as the source of the great river. Nonetheless, Glazier's life was full of adventures, including prison escapes during the Civil War and a horseback ride from Boston to San Francisco. $250.