English and Scottish Law to 1800 from The Lawbook Exchange 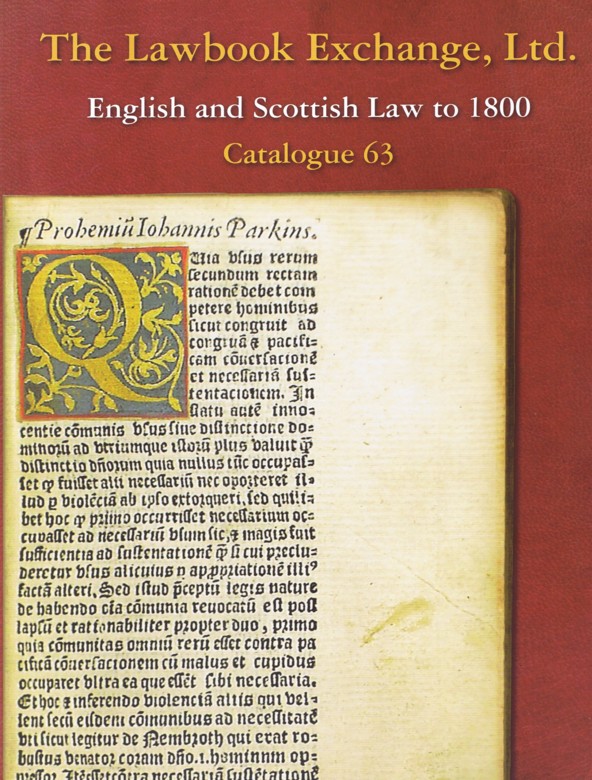 The Lawbook Exchange has issued a new catalogue of old works, specifically, English and Scottish Law to 1800. This catalogue includes everything from major legal tracts to accounts of sensational trials. If it is related to English law, and more than two centuries old, you may find it here. Now, here are a few of the items we found in this large collection.

There is no more logical place to start this review than with item 1, De Legisbus et Consuetudinibus Angliae, by Henry de Bracton. This is a first edition of the first treatise on English law. Not that de Bracton was there to admire the press run. He wrote this work in the thirteenth century, long before printing, and more than three centuries before the first edition was published in 1569. This is the major text of medieval English law, separating issues of procedure from substance, and providing case histories as intellectual, if not yet formal authority. Priced at $14,000.

There may be no better-known books in the field of law than Blackstone's Commentaries. It is the classic treatise on the common law. However, this was not Sir William Blackstone's first work. In 1747, he anonymously published an item entitled The Pantheon: A Vision. This was the only edition of this poem about religion and the Church of England, inspired by a visit to the Pantheon in Rome. Blackstone's authorship was only recently ascertained as a result of a letter found within a family copy of this book. Item 102. $5,000.

Item 10, The Lawes and Acts of Parliament Maid by King James the First and His Successours Kinges of Scotland... is only secondarily noted for its scholarly treatment of Scottish law. It is best known as containing the first printed reference to the sport of golf. The Kings' view of certain sports is probably still held by some today: "...that the fute-bal and golfe be utterly cryed downe. And not to be used. And as tuitching the futeball and the golfe, to be punished by the Baronnis un-law..." This 1597 set of laws is bound with three other later sets of acts. Item 10. $2,000.

Item 150 is The Works of That Learned and Judicious Divine, Mr. Richard Hooker, In Eight Books... This is a fifth edition of a work arising from a Presbyterian-Episcopal dispute, but which goes into a greater look at church authority and responsibility, and the "original contract" that is the basis of government. The book is prefaced by an account of the author's life by Izaac Walton. So that's what he did when he wasn't fishing. $750.

Item 81 is a pamphlet providing A Resolution of Three Matrimonial Cases... by John Turner. The first question is "whether it be lawful for a man to marry his deceased wife's sister's daughter." I don't know. Is there a law against it? Does this happen so often that there needs to be a law about it? It sounds kind of creepy, but it's hard to foresee every possible creepy behavior and pass laws to prevent it. So what was Turner's answer? You'll have to buy the book. $950.

Item 12 is A True and Plaine Declaration of the Horrible Treasons Practiced by William Parry the Traitor... published in 1585. Parry is not a particularly sympathetic character. He was a doctor, but evidently spent more than he made. He escaped his creditors to the Continent, where he became involved in spying. He was apparently a double agent, spying on or for the Catholics, against or for Queen Elizabeth. He managed to talk his way into a couple of pardons, lastly by claiming he was dealing with the Catholics to uncover a plot. This got him not only a pardon, but a pension and seat in Parliament. However, Parry went to the well once too often. He enlisted Sir Edmund Neville in a plot to assassinate the Queen, the apparent aim being to turn his coconspirator in for more favors. Instead, he was caught, tried, and hanged. $1,500.