36 Books and Manuscripts Not Online from Libreria de Antano 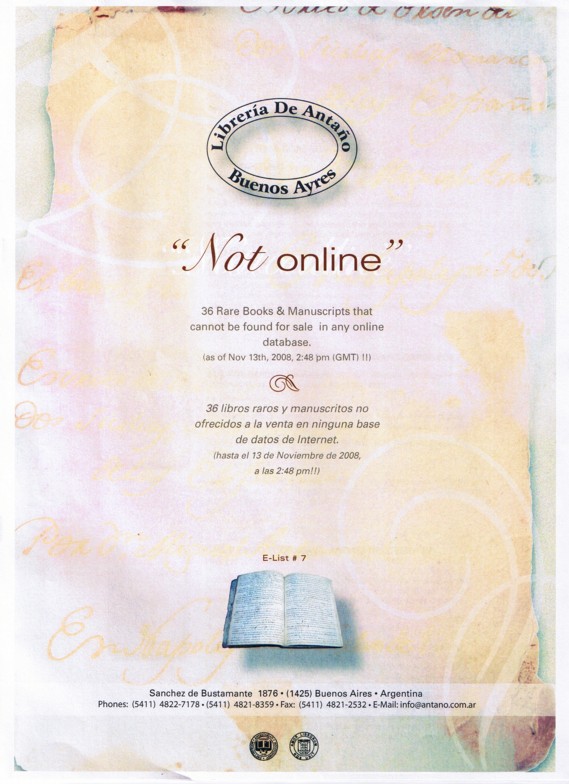 Not Online from Libreria de Antano.

Most catalogues are notable for what they are. Here is one noted for what it is not: Not Online. This is a catalogue from Buenos Aires bookseller Libreria de Antano, with the subheading: 36 Rare Books and Manuscripts that cannot be found for sale on any online database. Naturally, this is an appropriate catalogue for those who collect rare and uncommon works. More specifically, it is perfect for those who collect rare works related to Spanish and Portuguese America, especially in times long ago. Here are a few of the uncommon thirty-six.

Item 4 is a 10-volume history of the nation now known as Gran Colombia (officially, it was the Republic of Colombia, but that is also the name of the current, smaller nation). The title is Historia de la Revolucion de la Republica de Colombia, by J.M. Restrepo. Restrepo served as Secretary of the Interior under Latin America's great liberator, President Simon Bolivar from 1821-1830. Bolivar had led the revolution that overthrew Spanish rule and set up this independent nation in the area now home to Colombia, Venezuela, Panama, and Ecuador, along with parts of other states. Restrepo's work includes three volumes of documents and an atlas. The set was published in 1827, at the height of this country's brief existence. Despite Bolivar's best efforts, he was not able to stem regional rivalries, and Gran Colombia split apart in 1831. Priced at $6,400.

Item 31 is a collection of four very old documents related to slavery. The first is a 1550 sale of a slave, the second a 1561 power of attorney from Arequipa resident Cosme Espinoza to Bartolome de Pradanos so that the latter can receive a slave he purchased in Cuzco, the third another power of attorney from 1568 from merchant Don Juan de Solorzano allowing for the collection of debts in La Paz in the form of gold, currency, slaves, and other merchandise, and the fourth an 1874 Cuban sale of a slave. $2,700.

Item 27 is Instruccion para la Infanteria Ligera del Ejercito Mexicano... This is an instruction manual for the Mexican Army, and bears the label of Second Lieutenant Fernando Poescel. The timing is interesting. It is dated 1846, which was the year the Mexican Army would go to war with the United States. The U.S. victory in the Mexican War two years later enabled the U.S. to annex Texas, California, and New Mexico. $2,200.

Item 15 is a Tratados celebrados... an 1825 treaty between Chile and the native Mapuche Nation. While nominally subjugated by the Spanish, the Mapuche effectively controlled their region during the period of colonization, while trading with the Spanish. They maintained treaties with the Spanish, and once their rule came to an end, they continued with this treaty with the newly independent Chilean government. It is still claimed as a source of rights by the Mapuche to this day. $4,500.

Witold Gombrowicz was a Polish writer who took a cruise to South America shortly before the beginning of the Second World War. When war broke out, he decided to wait it out in Buenos Aires. In the end, he stayed far longer, most of the rest of his life. Item 17 is a copy of El casamiento, published in 1948, with an inscrutable (to me, at least) inscription: "To Edith in remembrance of the pants of Husserl, of the pocket of existentialism, of the dwarf ghost coffee with milk." Hopefully, Edith understood. $2,000.