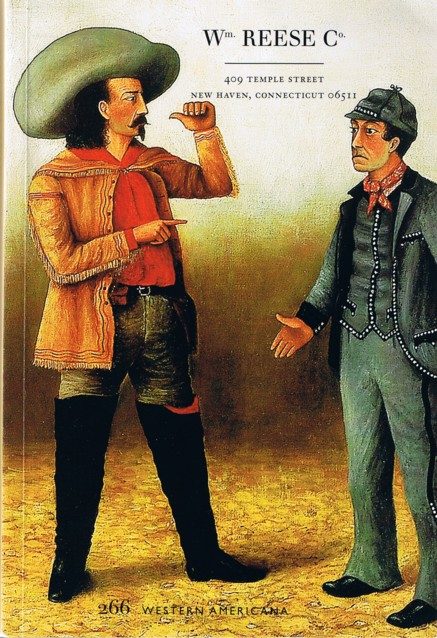 The recently released catalogue number 266 from the William Reese Company is entitled Western Americana. This is certainly one of the more popular of collecting fields. The American West has long fascinated not only westerners, but easterners and even Europeans and others outside America's borders. While promoters like Buffalo Bill (depicted on the cover) did much to create an image and myth about the land, the reality is it really needed no exaggeration. America's last frontier was a land of discovery and adventure, and it tugs at our imaginations still today. Here are a few of the over 200 items Reese is offering in this catalogue.

We start with a short book about a very long exhibit. Item 9 is a Description of Banvard's Panorama of the Mississippi River, Painted on Three Miles of Canvas...Being by Far the Largest Picture Ever Executed by Man, published in 1847. Banvard was an artist better known for quantity than quality, and a self-promoter in the Barnum style. Like Barnum, he was given to exaggeration, his panorama actually being one-quarter, or perhaps as much as one-half mile in length, not three. Nonetheless, that is a lot of painting. In the days before movies and television the next best thing was a moving panorama. The canvas would be rolled into a large scroll, which would move along as it unwound. It displayed 1,200 miles of the Mississippi. Banvard would describe the scenery as the process unwound, reportedly taking some two hours to complete. The showings were an enormous success, but by the end of the 1850s interest had receded. It was reportedly last displayed in 1881, and thereafter resided in Banvard's basement. Apparently, a few pieces were cut off for use as backdrops in a theater, but most deteriorated and was thrown away after his death. No pieces are known to survive, but fortunately, his promotional pamphlet still does. Priced at $850.

Item 183 is not a great Civil War book, it is the original manuscript of a great Civil War book. It is an early, perhaps first manuscript (filled with corrections) of Richard Taylor's Destruction and Reconstruction. Taylor was a Confederate General, and one of the most literate and accomplished commanders of the era. He was the son of President Zachary Taylor, an ardent unionist who promised to personally lead Union troops if the South attempted to secede. Those sentiments were not passed on to his children. Richard not only served in the Confederate military, but voted in favor of secession as a member of the Louisiana Senate. His sister became Jefferson Davis' second wife. Taylor resisted writing about his experiences after the war, but friends finally persuaded him. None to soon, as it turned out, as this draft was written in 1877-78, and Taylor died in 1879, the year the book was published. Taylor's account has generally been regarded as one of the best books written about the Civil War. Priced at $42,500.

Item 32 is a pictorial letter sheet with the caption: Tremendous Excitement! Samuel Whitttaker and Robert McKenzie Rescued from the Authorities, and Hung by the Vigilance Committee...in the Presence of Fifteen Thousand People. Being "rescued" so you can be hanged is something of an ironic use of the term. Whittaker and McKenzie, members of the so-called "Sydney Ducks" gang from Australia, which had engaged in robberies and arson, were picked up by the Vigilance Committee in Sacramento. They were "tried," convicted and sentenced to be hanged in San Francisco. The real authority, the sheriff, rescued the two and put them in jail, but the Vigilance Committee broke into the jail, liberated them from captivity, and proceeded to carry out their harsher sentence. This sheet contains a lithograph of the condemned hanging from the second floor of the Vigilance Committee building. $950.