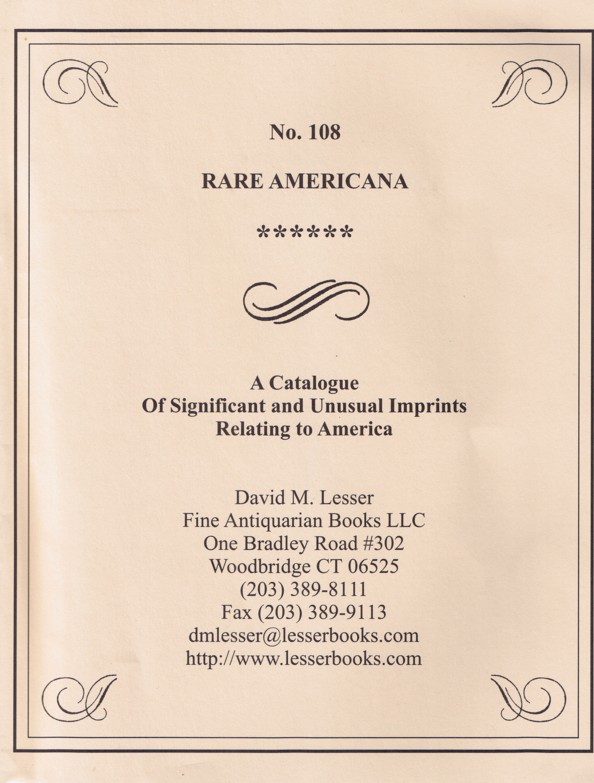 David M. Lesser Fine Antiquarian Books has issued their catalogue #108 of Rare Americana. The format and type of material is similar to other Lesser catalogues, but the items are new. The great majority run from late Colonial times to Reconstruction, with many concerning that troubled time in U.S. history, the run-up to the Civil War. This is uncommon material, primarily pamphlets, that are looks at the burning issues of their day. Lesser's catalogues are a walk through American history. Here are a few of those steps.

Item 121 is the witty A Dialogue. Between a Southern Delegate, and His Wife, on His Return from the Grand Continental Congress. A Fragment, Inscribed to the Married Ladies of America, by Their Most Sincere, and Affectionate Friend, and Servant, Mary V.V. Published in 1774, it is a dialogue in verse between a delegate to the Continental Congress and his wife. His wife takes him to task for their measures against England, warning that they will bring ruin to the colonies. The delegate condescendingly replies, "Mind the Household-Affairs, teach thy Children to read / And never, Dear, with Politics / trouble thy Head." The wife will have none of the male chauvinism, asking, "Because Men are Males, are they all Politicians?" This work was long ago attributed by Sabin to Thomas Jefferson, based on a note he found in a copy. However, that seems extraordinarily unlikely since the positions espoused are the exact opposite of those held by Jefferson. Priced at $2,500.

Texas has not entered into many international treaties, but here is one. Of course, this would have to come from its Republic period, its one decade in history as an independent nation. Item 117 is a Treaty of Commerce and Navigation Between Her Majesty and the Republick of Texas. Signed at London, November 13, 1840. This was printed in 1842, which is when the treaty was officially approved. This is the first separate printing of this first of three Texas-Britain treaties, and the first to note the official ratification by Parliament. This recognition by a major power was very important to Texans as they were still struggling with Mexico for recognition of their independence. $1,500.

Item 16 is one of the most thoroughly researched and documented attacks on the Supreme Court decision in the notorious Dred Scott case. That was the case which overturned the Missouri Compromise, that had prevented the extension of slavery into most of the western territories, and essentially claimed that blacks were less than humans. The item is Historical and Legal Examination of That Part of the Decision of the Supreme Court of the United States in the Dred Scott Case, which Declares the Unconstitutionality of the Missouri Compromise Act, and the Self-Extension of the Constitution to Territories, Carrying Slavery Along with It. The author was former Missouri Senator Thomas Hart Benton. Benton served as a Missouri senator for the first 30 years after it entered the Union in 1820, one of the senate giants in the era of Clay and Webster. He was a slaveholder, but as the years went on, his conscience overtook his previous views. In 1849, he came out against slavery, which led to his defeat in 1850. He would continue to express his opposition for the remainder of his life, such as in this piece. This is a second edition, published in 1858, as he was dying of cancer. $375.