Unusual and Obscure Pamphlets and Brochures from Marc Selvaggio, Bookseller 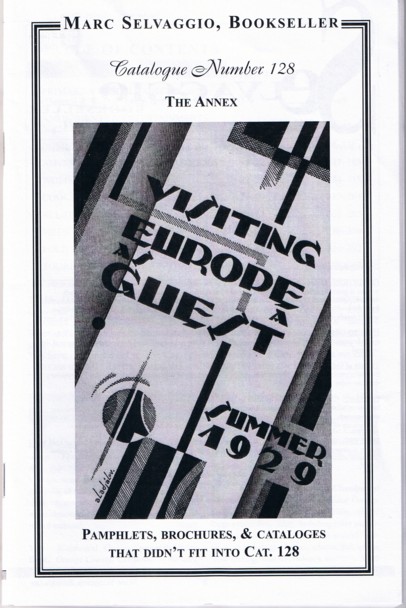 We recently received from Marc Selvaggio, Bookseller, Catalogue Number 128 The Annex. Not long ago we reviewed his Catalogue 128, but as he explains, these are "pamphlets, brochures and catalogues that didn't fit into Catalogue 128." Turns out there were a lot that didn't fit, as there are 467 items in this annex. What we have here is a collection of 18th and 19th century pamphlets and the like, under the headings of entertainment, business, advertising, by or about women, cookery, religion, medicine, politics, tourism, and miscellaneous. Selvaggio describes this material as "bargain basement," "economically-priced," and finally just "cheaper stuff." But, don't be fooled into thinking cheaper means lesser. This is fascinating material, and much of it rarer than some of the most sought after rare books. This is the type of material that will fit into many niche collections, along with some broader ones, and for the collector who doesn't have thousands to spend on printed works, this catalogue is filled with material in the $15-$45 range. This is a great place to buy in troubled economic times such as today.

Item 128 is an investment letter that will be of interest to the many people who collect railroads. It is a letter from the banking house of Fisk and Hatch of New York, promoting bonds of the Central Pacific Railroad on September 2, 1867. The Central Pacific was one of the two railroads laying tracks for the transcontinental railroad, their meeting at Promontory, Utah, still two years away. The letter reports on the railroad's progress, and points to a federal guarantee of the bonds - a "FIRST CLASS INVESTMENT." Priced at $45.

E. Haldeman-Julius was a radical reformer and socialist of the first half of the 20th century. He went into the printing business in Kansas where he began turning out cheap pamphlets in large numbers. His series of "Little Blue Books" sold in the millions of copies for prices around a nickel, mainly selling to people who couldn't afford much more. He was described as the "Henry Ford of books." However, his radical views ran him afoul of J. Edgar Hoover, the notorious head of the FBI, whose personal files on just about every government official kept them in his fear. That was not the case with Haldeman-Julius, who in the height of Hoover's power in 1948 published The F.B.I. - The Basis of an American Police State. The Alarming Methods of J. Edgar Hoover, by Clifton Bennett. It was a career mistake to take on the all-powerful blackmailer, but Haldeman-Julius was not a man to be afraid. Hoover denounced him as some sort of enemy of the country, and finally managed to get him convicted of tax evasion in 1951. Later that year, Haldeman-Julius mysteriously drowned in a swimming pool, with some holding suspicions that the illustrious F.B.I. Director was involved. Item 312. $25.

Item 291 is a report on Imported Adulterated Drugs, Medicines, &c. This was published in 1848 by the 30th Congress. The report was written by Dr. Thomas Edwards, a one-term Whig congressman who served only during this session. That gives him something in common with another one-term Whig Congressman who served only in this session - Abraham Lincoln. As a physician, Edwards was the man who attended to former President and Congressman John Quincy Adams when he suffered a stroke on the House floor, and was with him when he died two days later. $35.