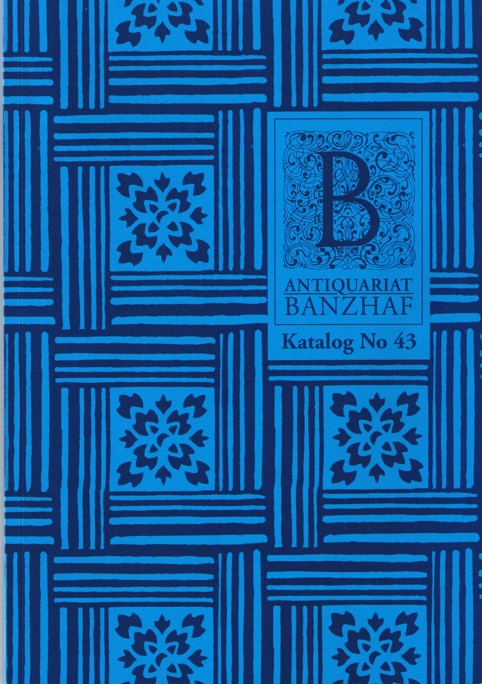 Katalog No. 43 from Antiquariat Banzhaf.

Antiquariat Banzhaf has issued their Katalog No. 43. As the name might suggest, most of the descriptions, and a great many items, are in the German language. This is not an easy language to follow without some familiarity, the words being so long... although there is enough English and French to help out those who can manage one of those two tongues. So, with that understanding, and no knowledge of German, we will do our best to give you an impression of this selection of various types of works. Specific subheadings include lithography, manuscripts, optics, photography, and children's books, but there are many other items, including cards, board games, and medals to be found.

Item 40 is Vues pittoresque des ruines les plus remarquables de l'ancienne ville de Pompei. This includes many plates of views of the ancient city of Pompeii. Pompeii is the famous Roman city that was buried by ash from a nearby volcano on Mount Vesuvius. The year was 79, and it was almost 1,700 years later before the city was rediscovered beneath the ash. The excavations were still relatively recent when this collection of views was published in 1824. Priced at €5,000 (euros, or approximately US $6,713).

Item 54 offers a very early look at the American far northwest: Opisanie Zemli Kamtschatki d. i. Beschreibung des Landes Kamtschatka... This work was written by the 18th century Russian explorer Stepan Krascheninnikov (or Krascheninnikoff). This item is focused on the Kamchatka Peninsula and Kurile Islands, still a part of Russia, but the author's travels took him farther east to Alaska and the Aleutian Islands. His book was not published until 1766, though his journey took place in the late 1730s, early 1740s, and Krascheninnikov died in 1755. The book tells much about the native peoples of these far northern lands. €4,800 (US $6,443).

Item 128 is a collection of 55 German baptismal certificates. The majority were printed from 1840-1867, but the entire lot ranges from 1756-1892. These certificates employ intricate and beautiful designs, and provide examples of many different printing techniques, such as lithography, engraving, woodcuts, gilt and others. Some include color printing, hand coloring and embossing. €4,000 (US $5,477).

Item 19 is Kurtzer Entwurf der Koniglichen Naturalien-Kammer zu Dresden, by Christian Eilenburg. This is a look at the natural history exhibitions at the Zwinger Museum in Dresden over two and one-half centuries ago. Displays featured minerals, fossils, botanical, zoological and anatomical specimens, and corals. This was the first guide to the Royal collections at the museum, and includes histories of each collection along with plates displaying the museum's floor plan. The final chapter describes a model of Solomon's Temple built over 20 years from Biblical references. Published in 1755. €3,800 (US $5,217).