Fine Books and Presses from McLean Arts and Books 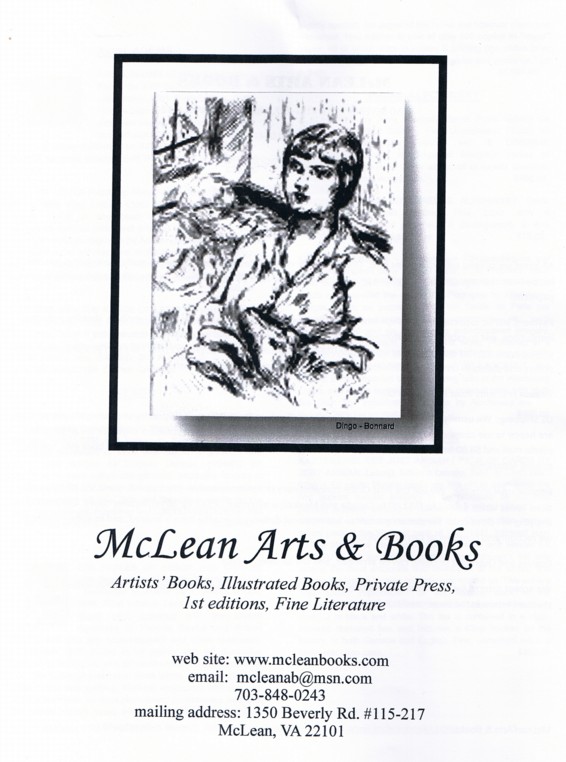 This month we have received our first catalogue from McLean Arts and Books of McLean, Virginia. It comes with the descriptive title, Artists' Books, Illustrated Books, Private Press, First Editions, Fine Literature. It is difficult to expand a description when the title succinctly says it all. So, we will just open the pages of this fine catalogue and give you a glimpse at the material inside.

We start with a book with an interesting connection to its subject matter. The book is Francis Parkman's The Oregon Trail, but this edition was published in 1945, almost a century after the first. It is a copy containing the illustrations of famed American artist Thomas Hart Benton. Benton's illustrated editions were the most popular of this classic, but this is one of a limited edition of 1,000 copies signed by Benton. That Benton would illustrate this book is appropriate, for it was Benton's namesake great uncle, Missouri Senator Thomas Hart Benton, who was more instrumental than anyone in pushing for America's westward expansion, the subject of Parkman's book. Priced at $200.

An American Tragedy was the breakthrough novel for Theodore Dreiser. He had written several books and had a substantial career as a newspaper writer, but he was well into his 40s when major success came. This book revolves around themes regularly visited by Dreiser - conflicts between love and money, pregnancy, and the case of the ambitious social climbing young man weighted down by an unwanted pregnancy with the wrong woman. Offered is a copy of the first edition from 1925, signed by Dreiser. $250.

In 1937, the nations of the world gathered for a world's fair in Paris. It was intended to celebrate modern technology, art, and the end of the Great Depression. In reality, the world was on the edge of its greatest calamity, with nothing but dark days ahead for Paris and most of the world. Two large pavilions, those of Nazi Germany and Soviet Russia, faced each other, a propaganda battle that in a few short years would become a brutal hot war. Offered is a copy of Paris 1937, by Jean Gabriel Dagagnes, published by the Municipalite Parisienne. It is a celebration of the fair, containing prose and poetry from French writers such as Paul Valery, and original etchings of Paris by Henri Matisse and others. This is copy #158 of a limited edition of 500. $5,000.

The Limited Editions Club undertook a major printing in 1939. Designed by the noted typographer Bruce Rogers, this is a 37-volume set of The Comedies, Histories, and Tragedies of William Shakespeare, plus two volumes of The Poems of William Shakespeare, and a one-volume Shakespeare Commentary. The artwork was contributed by many notable artists, including Arthur Rackham and Eric Gill. The plays were printed in a limited edition of 1,950 numbered copies, the poems in an edition of 1,500. The sets are signed by Rogers. $1,500.

Rockwell Kent was an American artist, writer and illustrator. While Kent was highly sought for his art, his politics rubbed some people the wrong way. Already a social activist, his politics veered sharply left from the 1930s until the end of his life in 1971 (he received the Lenin Peace Prize, a notable award in the old Soviet Union, in 1967). In the 1930s, he was placed on a list of "un-Americans" by the conservative-minded Daughters of the American Revolution. Kent responded with this question/statement: What is American? Offered is a 1936 reprint of this article that first appeared in New Masses, a place which McLean notes, the ladies of the DAR were unlikely to see it. $225.

McLean Arts and Books may be contacted at 703-848-0243 or mcleanab@msn.com. Their website is found at www.mcleanbooks.com.