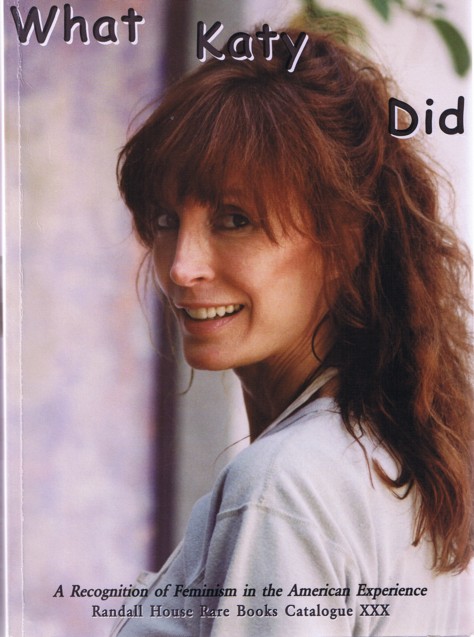 What Katy (and thousands of others) did.

This month we review one of the most extensive catalogues on a subject we have seen: What Katy Did. A Recognition of Feminism in the American Experience. This is an exceptional catalogue, long in the making, long in the offerings. Randall House Rare Books has come up with over one thousand items, all pertaining to or written by women. They aren't necessarily "feminist," though many pertain to the long struggles for women's rights. What you will find here are many famous and important women, as writers or subjects. They range from the 1960's and 70's New York Congresswoman Bella Abzug, known for fighting for women's and others' rights (and for her large hats), to Babe Didrickson Zaharias, the marvelous woman athlete from the first half of the 20th century, an all around competitor whose biggest mark was made in golf. Here are just a few of the very many items Randall House has put together.

Item 971 ties together two remarkable women fighters for abolition: Harriet Beecher Stowe and Sojourner Truth. Stowe was the novelist whose Uncle Tom's Cabin brought the horrors of slavery front and center for all to see in the decade before the Civil War. Truth was a campaigner for freedom, a woman born into slavery in upstate New York (in 1793, slavery still existed in the North) who, despite being uneducated and illiterate, became a major speaker for abolition. Offered is the April 1863 issue of The Atlantic Monthly, containing Stowe's tribute to Truth, Sojourner Truth, the Libyan Sibyl. Priced at $100.

Hannah Duston was an early fighter for freedom - her own - and the Indians rued the day they messed with her. Hannah and her family were living in rural Haverhill, Massachusetts, when a group of Indians came calling with unfriendly intentions. Most of the family escaped, but Hannah, her nurse, and her few week old baby were captured and forced to march north. When the baby slowed them down, one of the Indians took it and smashed its head against a tree. Hannah would get her revenge. Hannah, her nurse, and a 14-year-old boy captured earlier were sent with a group of 12 Indians to continue the arduous journey through snow and mud to Canada. One night, they camped on an island in New Hampshire. The Indians (only two of whom were men, the rest being women and children) got a bit careless and went to sleep with no guard. Hannah and the boy grabbed the Indians' tomahawks. With spectacular efficiency, Hannah killed nine of them, the boy one, and one Indian woman and child escaped. Hannah and her companions set down the river in a canoe when she realized no one would believe their story. She quickly reversed course, scalped the Indians, and returned with the evidence (which was also needed for her to secure a reward). Hannah's story was first written up by Cotton Mather, of all people, in 1702. Item 273 is Heroism of Hannah Duston... by Robert B. Caverly, published in 1874. Hannah was a hero in her hometown for centuries, but her story makes us a bit more squeamish today. $100.