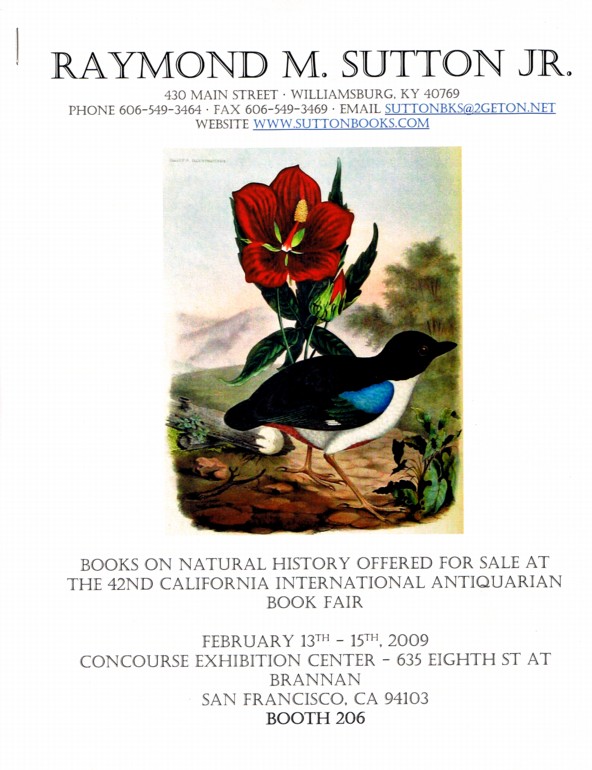 This month we received our first catalogue from Raymond M. Sutton, Jr., of Williamsburg, Kentucky. Sutton's specialty, and the catalogue's title are one and the same: Books on Natural History... This catalogue was prepared for the recent California Antiquarian Book Fair, so while we are about six weeks behind the times, that amount is insignificant, considering most of the books are centuries old. As one would expect of books in this field, they combine the latest knowledge about the natural world of their time with some of the most beautiful and artistic illustrations. This is where art and science intersect. Here are some of the titles Sutton is offering.

Item 21 describes what may be the most important expedition for natural history, though it hardly seemed so at the time. It is the Narrative of the Surveying Voyages of His Majesty's Ships Adventure and Beagle, Between the Years 1826 and 1836. This three-volume set was prepared by Captains Robert Fitz-Roy and Philip Parker King, with the third volume written by naturalist Charles Darwin. It is his account of the second voyage, on the Beagle, which led to a total reevaluation of how we saw the world. Published in 1839, Darwin describes his discoveries in Patagonia and surrounding areas from 1831-1836. Darwin came away from the voyage convinced that life on earth had undergone change, even if he was still grappling with understanding the exact mechanism. That he would publish two decades later to great controversy. Priced at $22,000.

Item 47 is a third and completely revised edition of a work that was enormously influential on Darwin, Charles Lyell's Principles of Geology: being an inquiry how far the former changes of the earth's surface are referable to causes now in operation. Lyell looked at geological events occurring today, concluded they were similar to what had occurred in the ancient past, and used this to interpret the causes of evidence displayed in the geologic records. Darwin would adopt his approach in deciphering what he found in nature. Years later, Lyell would learn of, and reluctantly come to somewhat accept Darwin's theory of evolution, though his strong, traditional religious beliefs made this difficult for him. $1,700.

After his momentous publication of his theory of evolution in 1860, Darwin set about studying the process of natural selection in more mundane areas. Here are some of those works: Item 18. Insectivorous Plants. First edition. 1875. $650. Item 19. The Movements and Habits of Climbing Plants. Second edition. 1875. $750. Item 20. The Power of Movement in Plants. First Issue. 1880. $1,000.

Now we have an item for collectors of James Bond books. James Bond? What is the famous, but fictional secret agent doing in a catalogue of natural history? It turns out the real (as opposed to the fictional) James Bond was an American ornithologist, whose specialty was birds of the Caribbean. You might think that the identity of the ornithologist and secret agent's names is a coincidence, but it is not. The fictional Bond's creator, Ian Fleming, was a birdwatcher who owned a copy of James Bond's Birds of the West Indies. Now you can too. Reportedly, Fleming wanted a very simple, ordinary name for his hero, and he found it in the ornithologist. This book was published in 1936 and contains descriptions of every bird known to be found in the West Indies. Item 11. $500.

Roger Tory Peterson's bird guides are the most popular ever among birdwatchers. Here is his first: a first edition, first state of A Field Guide to the Birds... published in 1934. It is inscribed to a Miss Alice Klund with hopes it would help her identify birds on her trips to Presque Isle. We have not been able to positively identify Miss Klund, though there was an Alice Klund close to Peterson in age who grew up in Erie, Pennsylvania, about an hour from Peterson's hometown of Jamestown, New York. Item 53. $3,000.

Item 77 is the complete, six-volumes (including atlas) of Charles Wilkes' Narrative of the United States Exploring Expedition. During the Years 1838...1842, published in 1845. Wilkes visited numerous places in South America, the Pacific coast of North America, Hawaii and other Pacific islands, and Australia. However, what he is best known for was his early explorations of Antarctica. Wilkes' expedition was important for America, as it was the first major exploring voyage by the new country, and it helped establish its prestige on the international stage. $15,000.