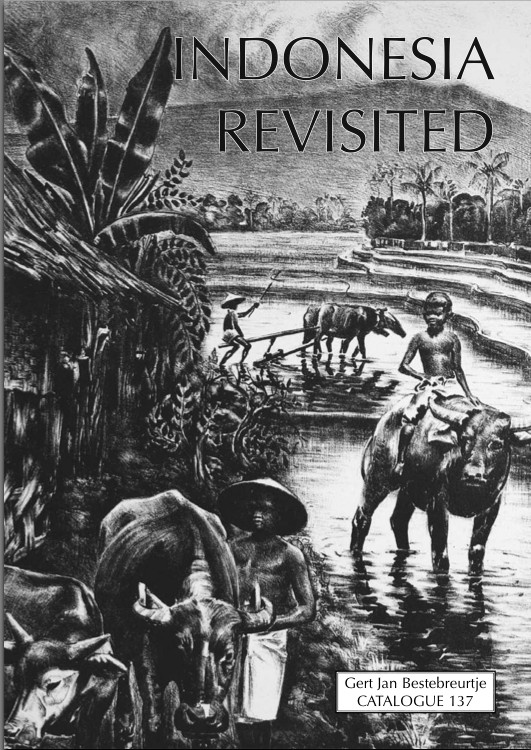 Gert Jan Bestebreurtje Rare Books has issued a catalogue entitled Indonesia Revisited. Indonesia is closely tied to Dutch history, though it is now a far away, independent country. For almost three centuries, Indonesia was the heart of the Netherlands' colonial empire, controlled by the government's right arm, the Dutch East India Company. For a while, it was the colonial power's greatest source of wealth. In time, all good things come to an end. The Dutch empire ran from the 17th century until the Second World War. The Netherlands lost control of the land during the war, and was never able to fully regain control after war's end. In 1949, the Dutch threw in the towel, and Indonesia became independent. However, the history of these two lands is long and complicated, and Bestebreurtje herein looks back at those days now gone.

Item 139 harks back to the early days of Dutch power, when the VOC (Dutch East India Company) was strong enough to readily enforce its will on the natives. This is an engraving by Romeyn de Hooghie, headed Victorien der Nederl. Geoct. O. Compagnie... from 1669. It celebrates the VOC's victory over the Kingdom of Macassar. The Kingdom was liberal in allowing various nations to trade from its port. This did not sit well with the VOC, which put a stop to the practice by force. This is a dramatic illustration, as one would expect from this day, with scenes from the battle, portraits of leaders, two poems, and a monogram of the VOC surrounded by Mars and Mercury. Priced at €2,750 (euros, or approximately $3,535 in U.S. Currency).

While most of the books offered are in the Dutch language, here is one for English speakers (and readers): The History of Java, by Thomas Raffles. This is a first edition of one of the best and most important histories of this Indonesian island, home of the nation's capital city. Published in 1817, it tells all about Java and its inhabitants at the time. English texts about Indonesia from this period are rare, but there is a good reason for one at this precise moment. The British took control of the area briefly in 1811 after Napoleon occupied Holland. Raffles was the colony's English governor. However, a treaty in 1814 restored prior Dutch possessions to the Netherlands. Item 287. €6,250 (US $8,040).

One of the least pleasant aspects of Dutch colonization was the "Cultivation System." By 1830, the Dutch government was almost bankrupt. To replenish its treasury, it imposed this system on the colony. Natives were forced to plant cash crops the Dutch could export and devote a portion of their time to growing these items. It made enormous sums of money for the motherland, and for those who enforced the system. For the natives, it often led to poverty and hunger, as they could no longer devote as much of their land to food. The system lasted for 40 years, whereupon the consciences of the people back home were no longer able to tolerate their government's policy, and Cultivation was abolished. Item 381 is a bill from the Dutch parliament along with an explanation of the system from the time near its demise - 1865. The title is Ontwerp van wet met de daarbij behoorende memorie van toelichting... by Pieter Vreede Bik. €80 (US $103).

Here is an item you probably don't have - an Acehnese-Dutch dictionary. Aceh is located on the island of Sumatra in Indonesia, so a dictionary would have been useful to the Dutch in 1934 when it was published. This one was written by Hoesein Djajadiningrat, who was said to be a master of Acehnese lexicography. The title is Atjesch-Nederlandsch Woordenboek. Item 77. €350 (US $450).